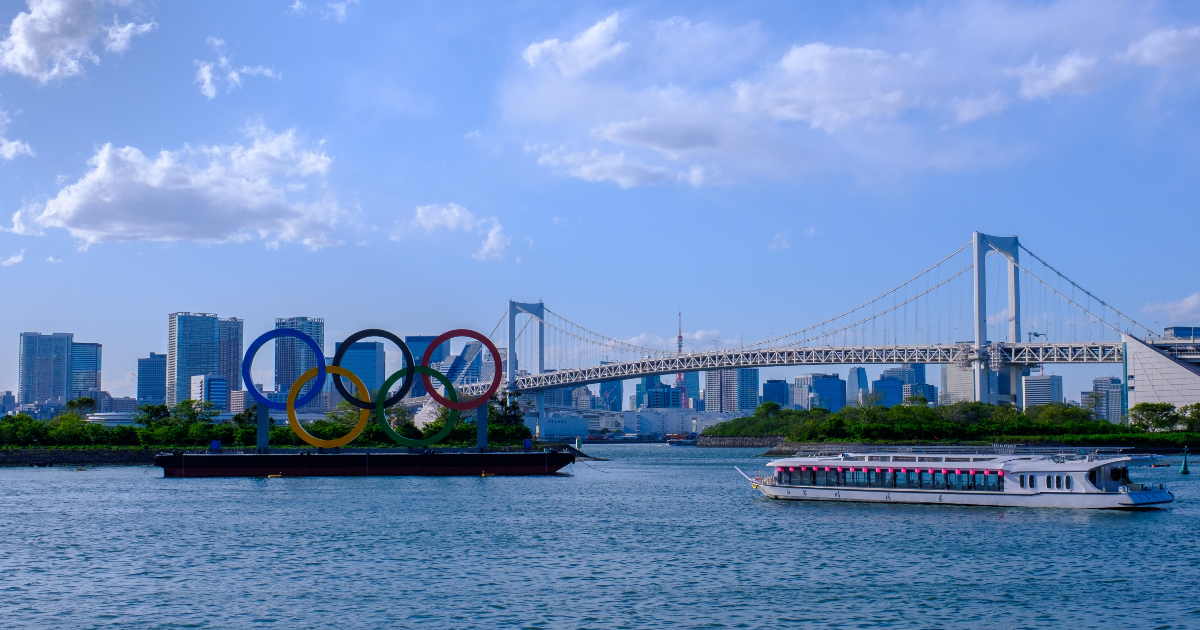 Image description: Tokyo in 2021 with the Olympic Rings visible.

The 32nd Olympic Games have drawn to a close in Tokyo after a fortnight-long sporting bonanza.

As we have come to expect, the Opening Ceremony saw a festival of light and colour: a celebration both of Japanese culture and of what Thomas Bach, President of the International Olympic Committee, called “the unifying power of sport”.

It was a real shame, then, that so few were present to see it. Attendance on that first night was limited to a few select dignitaries – the likes of Japan’s Emperor Naruhito, France’s Emmanuel Macron, and America’s Jill Biden – and a scoreboard warned them to “clap, but do not sing or chant.” The omnipresent “Tokyo 2020” branding served as a reminder that these are a Games like no other, delayed for a year by a pandemic which has upended normal life. The Japanese flag was borne into the stadium not only by athletes, but by healthcare workers. A moment of silence was held to remember those whose lives were lost.

It is in that grim context that an Ipsos poll released last month found that a staggering 78% of Japanese people didn’t want these Games to go ahead. Japan is battling a fresh wave of COVID-19 infections and there have been fears that flying in so many athletes from all corners of the globe might spark the ultimate ‘superspreader event’. Last weekend, two silver medallists from Georgia were asked to leave after breaching COVID-19 restrictions to go sightseeing in the city. Added to this is the fact that Olympic Games are extremely expensive – a 2016 Oxford study showed that they go overbudget by an average 156% – and that the lack of spectators means that Japan is likely to miss out on much of the economic boost it was expecting.

Yet we have been treated to an amazing spectacle of sport so far this summer and, slowly, the mood in Japan is shifting. The hosts chalked up an early lead but have since fallen to 3rd place. Yesterday, Team GB finished 4th in the medal table with 22 gold medals and 65 medals overall. The British athletes were doubtless hoping to replicate their success in Rio in 2016, when the team finished as runners-up with 27 gold medals. Britain’s first gold this year came from Adam Peaty, who secured a commanding victory in the men’s 100m breaststroke last Monday. His time of 57.37 was the fifth best in history: the only better performances in that event have come from Peaty himself, for no-one has ever come within a second of his world record.  A shock upset came in rowing, usually one of Team GB’s best (and, with £24.7m of investment, best-funded) sports. Britain failed to win any gold medals on the water for the first time since 1980.

There have been several such surprises this year. Venezuela’s Yulimar Rojas broke the first world record of the Games when she leapt 15.67m in the women’s triple jump, shattering the previous world record of 15.50m and becoming Venezuela’s first ever female gold medallist in the process. In the daredevil world of BMX biking, Britain’s Bethany Shriever achieved a stunning win over Colombian two-time defending champion Mariana Pajon by just a tyre’s width. Last weekend also saw the first men’s 100m final without the legendary Usain Bolt in 13 years, with an unexpected victory for Italy’s Marcell Jacobs. The favourite to win had been Chinese sprinter Su Bingtian, 32, who has had an astonishing career revival and managed the fastest time in the semi-finals – but when it came down to it, he finished in last place.

It is these personal tales of athletic achievement, the emotional highs and lows of victory and defeat, which really resonate. It was good to see Jonny Brownlee, who has spent so much of his career in the shadow of his brother Alistair, bow out on a high by winning his first Olympic gold in the mixed relay. Who could not share in the sheer joy of Tom Daley, who also became an Olympic champion for the first time? Or the anguish of Novak Djokovic, slamming down his racket after failing in his bid to win the first ‘golden slam’ (all four grand slam tournaments plus Olympic gold) since 1988? Or the heartbreak and subsequent triumph of Simone Biles, America’s greatest gymnast, who courageously withdrew from several events to focus on her mental health and returned to win a bronze?

The official theme of Tokyo 2020 is “United By Emotion”. For a few summer days every four years, millions of us across the world become captivated by a whole cornucopia of sports (many of which get little attention the rest of the time) – 46 in all, from equestrianism and archery to skateboarding and golf. That is the magic and the power of the Olympic Games. In our current crisis, the Olympic motto provides hope: that we can emerge faster, higher, stronger – together.