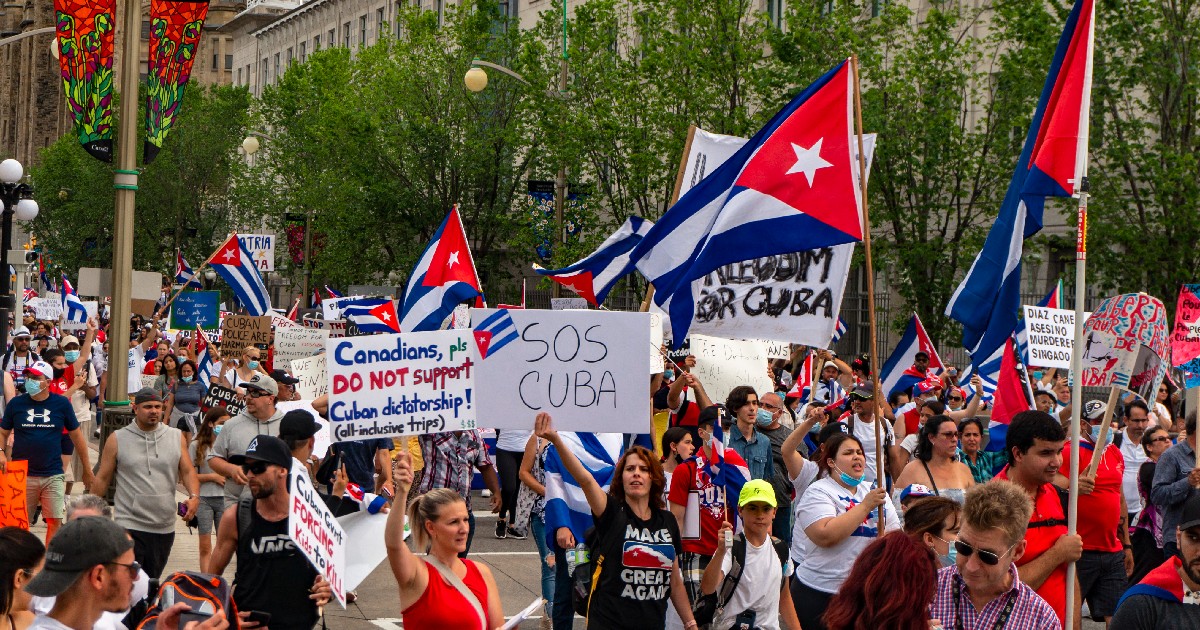 ‘We were so hungry, we ate our fear’: The uncertain consequences of Cuba’s protests

On Sunday 11th July, in the town of San Antonio De Las Banos on the outskirts of Havana, historic protests erupted against the Cuban government. In the following days the protests spread throughout the country, with protestors chanting ‘freedom’ and ‘down with the dictatorship’. The protests were fuelled by frustration with medicine and fuel shortages, the Cuban government’s handling of the COVID-19 crisis, as well as a broader frustration with the status quo.

Videos spread across social media of protestors flipping over police cars, looting stores and throwing rocks, all capturing international attention. An anonymous protestor in San Antonio stated ‘we are not afraid. We want change, we do not want anymore dictatorship’. The Cuban government responded in kind: ’the order to fight has been given – into the street revolutionaries!’ Declared President Miguel Diez-Canal.

Similar protests have not been seen since the 1959 Cuban revolution. Amnesty International recorded at least 150 protestors being arrested by the government, while the Cuban organisation Movimento San Isdiro totalled at least 170 protestors being arrested as consequence of the protests. So unnerved was the Cuban government by the scale of these protests that ninety year-old Raul Castro, brother of Fidel Castro and the former head of state, was rolled out to attend a mass rally to stir support for the embattled regime.

Numerous factors are responsible for the timing and size of the protests. The Covid-19 pandemic is particularly crucial, with the Cuban economy contracting 11% in 2020. This sharp economic contraction was the result of the country’s increasing dependency on tourism which has collapsed in the last two years. Without any tourists, the Cuban government could not afford to pay any of its debts abroad, ensuring a lack of essential resources domestically.

The collapse of tourism was compounded by a collapse in sugar yields. Alongside tourism, the Cuban government has prioritised sugar production in recent years, but this production has similarly drained to a halt. Breakdown in machinery, a lack of fuel, and poor harvests coalesced to dry up sugar production, and tipped this economic downturn became a full blown crisis.

The protests present an existential threat to the Communist regime, with Cuban leftists feeling free to finally criticise the state.

The protests present an existential threat to the Communist regime, with Cuban leftists feeling free to finally criticise the state. Left-wing Cuban activist Luis Emilio Aybar argued that the actions of 11 July were the consequence of communists failing to counteract the ‘harmful practices of the state’. Aybar painted the Cuban government as a right wing, with its dependency on tourism the result of a ‘failure to pressure the government for the left’. This criticism of the Cuban state was equally advanced by socialist singer-songwriter Silvio Rodriguez, who has similarly turned on the communist government. He has been meeting with dissident protests and calling for all non-violent protestors to be released. All this criticism points to the waning authority of the Cuban government at such a critical juncture.

The July revolt raises further question about the nature of US-Cuban relations which has become increasingly strained in the last five years. Despite much clamour about the Obama administration’s so-called ‘Cuban Thaw’ in 2015, relations between the two countries remain hostile. The Trump administration reversed all of Obama’s policies, placing Cuba back on a list of state sponsors of terrorism, attacked countries that traded with Cuba, and prevented Cuban nationals from sending money back home. These polices isolated Cuba internationally and added further strain to Cuba’s failing economy.

The Biden administration seems likely to follow this aggressive course. Despite the fact that Joe Biden pledged on reviving the ‘Cuban thaw’, recent policy decisions point to further aggression. Biden declared Cuba to be a ‘failed state’ and on 22 July announced new sanctions that specifically targeted a high-ranking official Alvaro Lopez Miera of the Cuban Revolutionary Armed Forces and a unit within the Cuban state’s security department. This aggression and immediacy of the Biden administration’s response points to the unlikeliness of a return to a detente between the United States and Cuba.

Despite the fact that Joe Biden pledged on reviving the ‘Cuban thaw’, recent policy decisions point to further aggression.

On Thursday 22 July, President Biden declared in a speech that these sanctions were ‘…just the beginning’ and that his government would continue to ‘sanction the individuals’ that were oppressing the Cuban people were punished for their actions. Ryan C. Berg, an expert on South America at the Centre for the Strategic International Studies, argued that the sanctions will have minimal effect based on the fact that Miera would likely lack any practical assets within the United States. Nonetheless Biden’s rhetoric points to a turning point in international relations, with bipartisan support in the U.S. for hardening relations with Cuba. However the United States’ overall ambitions seek are far from certain. Carlos Alzugaray, the former Cuban ambassador to the EU, summed up this uncertainty distinctly: ‘Do they want major riots and the collapse of the Cuban government? Do they really want that? What happens next?’ Despite this shift in U.S. policy, the end goals lack crucial clarity.

The broader consequences for the Cuban revolt are also unknown. Commentators have compared the protests to those held in Venezuela and Nicaragua in the last decade. Despite both these nations facing a more effective and organised opposition, embodied particularly by Juan Guiado in Venezuela, the status quo remains the same in both nations. The ruling regimes retain control and both were able to prevent national protests from becoming full-blown revolutions.

Whether Cuba will endure a similar result, with a shaken but enduring communist regime, or whether this protest is the trigger of a broader movement is uncertain. Nevertheless, not since the founding of the one party state by Fidel Castro in 1959 has the Cuban government faced such a grave threat to its existence.