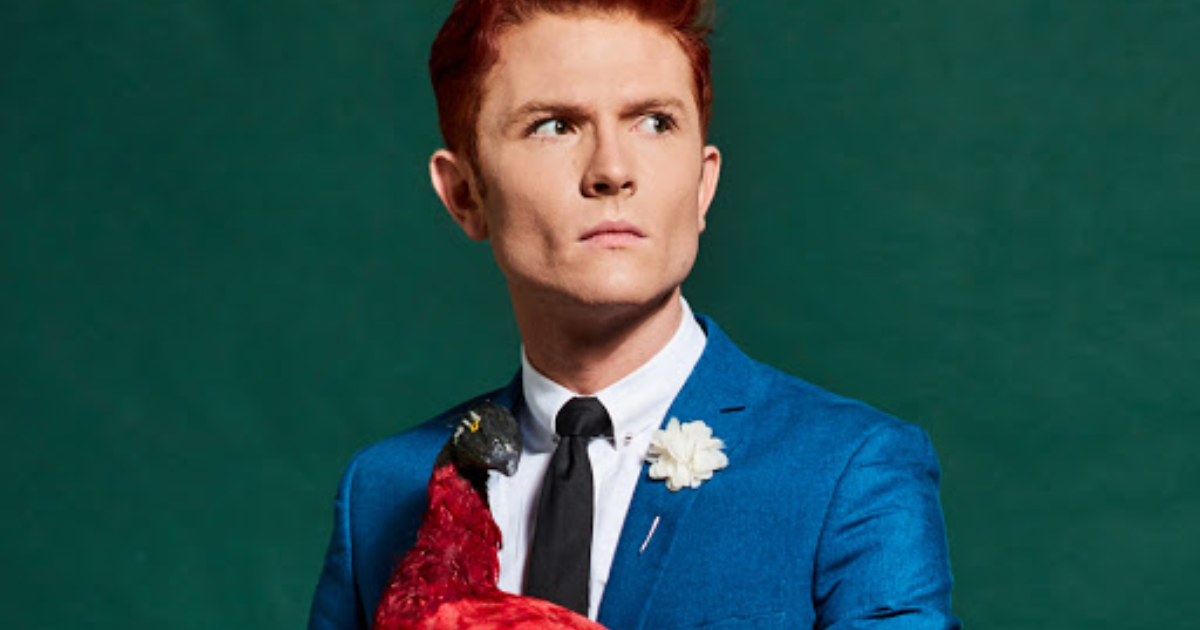 An Interview with Rhys Nicholson

Image description: a picture of Rhys Nicholson on a green background

Gaia Clark Nevola talks to Rhys Nicholson, an Australian comedian, about his style of comedy, his inspirations and where he’s hoping to head next.

The disadvantage of having spent lockdown re-watching the sharp and at times manic comedy of Rhys Nicholson is that now his voice lurks pervasively as a slyly conniving imaginary friend. Two people last week tried to tell me they were “old souls” on Tinder, and both times, the echo of his set (‘you’re not an old soul, you’re an unregistered sex offender’) sprung unpleasantly to mind. Likewise, I relate hard to the self-satirising neediness with which he speaks about his gayness, his periods of low mood and the grimly hilarious way he speaks about intimacy communicated badly across long distances. Making time out of his packed schedule of comedy, TV and most recently Drag Race, Rhys sits down with me (via zoom) for a little catch up about queerness in comedy, the voices in his head, and his implicit trust for men with contour.
Speaking to him, Rhys has a lovely warmth to him, but a quickness that gets under your skin. There’s a kind of nervousness at times too, a tendency to ramble charmingly off on tangents and then apologise bashfully for going off-topic. Frankly, I’m dead nervous too, so the slight anxiousness is welcome. At one point he looks frustrated that he can’t remember a film that he’s trying to recommend I watch and jumps up to get his phone, looking slightly shy as he takes a big sip from his cup as he sits down again. We talk at 10 pm UK time as he eats his lunch in Vancouver where he tells me how he’s locked away in a condo apartment as he films an upcoming sci-fi Netflix show. He seems genuinely worried that I’m not getting my sleep but cracks an open smile when I tell him I tend to have sleep issues anyway “Oh nice- so do I!”.

Rhys’ career has pretty steadily grown from his 20s when he worked 10-hour shifts at his day job and did open mics by night, gradually working his way to featuring in bigger shows, to buying a comedy club with his fiancé in Melbourne, to his Netflix set. Most recently, he was the featured judge on the newest permutation of the RuPaul empire ‘Drag Race Down Under’, something that has thrown him decisively into ubiquitous stardom. He tells me of the bizarreness of it all “there I was, the week before filming, in a quarantine hotel and up comes a notification that Ru Paul Official has tweeted about me”. His jaw drops and there’s a real infectious charm to how obviously it means a lot to him. I mean- how could it not?

I ask him about how it’s felt to change notoriety, and whether he always knew that this is what he’d do. “Oh absolutely! I feel like with comedians there are either the ones who always wanted to do it whereas there are other people who are like ‘I just fell into it’ or ‘a friend signed me up for an open mic’. I was 100% in the first camp. I have 0 other skills, so I knew this is always what I need to do.” We chat about him growing up in a small city near-ish to Sydney (“Newcastle AU is like a short man, quite aggressive, but essentially not as important as it wants to be”). ‘Were you a funny kid?” I feel compelled to ask. “No, but I so, so wanted to be, I was probably really fucking annoying, I think I was just an attention seeker.” He cracks up, telling me about how he’d make his parents watch while he pretended to win at the People’s Choice Awards. “Now lots of my friends have kids and I’m forever made to watch their annoying little shows – this must be my punishment”.

Conversation turns to sets that have gone a bit wrong, or shows that he remembers with a slight sourness, and I ask him about how it is to be so vulnerable about mental health in a comedic setting. Rhys’ comedy is well known for speaking about his long-term eating disorder and his encounters with depression and anxiety; causes that he also does the odd bit of charity work for. He tells me about shows he did earlier in his career when he “was ready to talk, but not to make it funny”. “In order to talk about it, you have to have a point of view and not just pain. I feel like there’s an epidemic in comedy where we’re using things to get applause. It happened a lot before gay marriage in Australia and you’d see straight men being like: “guys, I support gay marriage” and the same happens with mental health with performers shoving in the fact they’re on antidepressants to get gratuitous claps. It sounds kind of cold. I guess, I don’t think comedy should be for the performer’s benefit, you have a relationship of trust with your audience and they need to have a good time.” Pressing slightly I ask him where he thinks the line is, and he refers to Hannah Gadsby and Richard Gadd “these things should be talked about, but the audience shouldn’t leave wondering if the performer is okay, it should be more like “I’m okay, and if you feel like this, you are also okay too. Doing comedy isn’t an exchange for having a therapist.”

“I really love show-business – I’m obsessed with that golden era look…‘Am I gay?’ Yes, I am! That dishy 60s suit- ah!” This is where the dress sense comes from, along with the suaveness and slicked-back hair. “And the contour! I always trust a man with contour!” he volunteers, looking suddenly a bit mischievous. I guess that’s one to live by. Winding back to the idea of internalised voices, I ask him about who lives rent-free in his head, and he’s oh-so-happy to cite his sources, in the kind of way of respectfully venerating the people around him. “All the usual references for comedians who are gay, Monty Python, John Wane, Maria Bamford.” We talk about being queer kids scanning films made under the Hay’s code, trying hard to spot the gay people and of queer-coded Disney villains. Typing this up, I kick myself for not asking him his favourite. He tells me, laughing at how old he feels, about the early days of YouTube, and obsessively watching snatches of shows from ‘Joe’s Pub’ a queer burlesque bar in New York. He looks uncertain at the description though, “I still remember people calling me a queer; I feel like is pretty recent that we’ve taken it on as an adjective”. It doesn’t surprise me when Rhys tells me that he’d often thought hard about going into the world of drag in the early years of his professional career. Thinking about how affable he is on the call as compared to the slight frenzied air in his stand-up it strikes me that his stage presence is a kind of drag persona too. “I mean by no stretch of the imagination would I say that I’m anything like as talented as that because they work so hard and it’s such an art form but yes, I guess. The person who walks on stage is the most confident version of myself, they’re what I think when I’m at my best – it’s me but 10 times smarter, funnier, with better and redder hair.”

“My grandmother’s voice is always with me too. I mean she’s not dead, so I don’t know why I said it like that. She’s 86 and was honestly born to be a grandmother, she loves gossip, harsh humour and depression-era food. There’s this thing my mum says that I’m obsessed with – growing up they could only ever eat chicken wings because my grandmother refused to say breast, and now her favourite thing to do is watching Turkish soap opera dramas and Game of Thrones.” Frankly, she sounds like an icon. He tells me about how supportive she was of him coming out, waking him up before his first Pride saying “Ready for the big day?”.

Looking forward to plans for the future he says: “All you want as a performer is currency. Not money, but relevance.” He’s just started out in acting and I asked him if he’d want to do more of it. “I don’t want to make a sitcom. No one cares about the life of the comedian anymore. It’s done. I love monsters though. I love a TV monster. Whenever I pitch stuff people are like ‘They’re not very likeable!’ Very rarely do I meet likeable people. Do you know what I mean? Very few people in their own way aren’t monsters. I’m a pretty nice person, but I’ve done monstrously weird secretive backstabby things. And you look back and it’s like – I destroyed that person’s day because I wanted attention. I’d love to do a show about that.” “I also want to not ever write about covid”, and he hints of quite how bleak the last year has been. We round off by talking about Melbourne, where his (currently closed) comedy venue is. I tell him how much I’d like to go. “It’s such a great place! You should come, come to Melbourne, do a gap year!” It’s definitely not meant as such, but I decide to take it as an invite; maybe if I’m lucky, I’ll meet his grandma too.