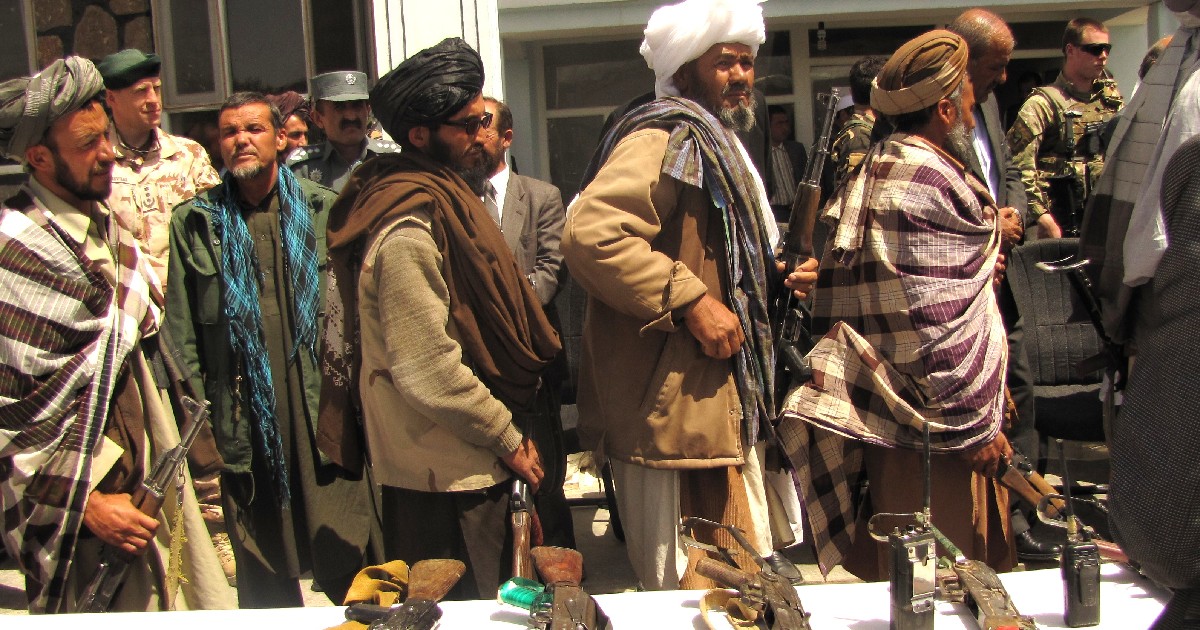 Image description: Taliban soldiers in a queue behind a table with several automatic weapons

Two Oxford postgraduate students are trapped in Afghanistan after being refused access to UK evacuation flights, according to The Times.

Fearing for their lives, the students are currently hiding in Kabul despite having documentation that entitles them to come to Britain. Both students have been learning online this year, but they would be studying in person under normal circumstances.

Ahmad (not his real name) moved to Kabul after the Taliban captured and tortured his father in 2015. Having chosen to remain in Afghanistan to support his family after his father’s death, he and his wife are now locked down in their flat. The couple have a young son and a three-week-old baby. He told The Times: “I have lost my father and my job and will lose my home.”

He is terrified that his previous status as a senior official in the Afghan government will make him a target for the Taliban. “They have executed some police and soldiers from Kandahar and Helmand who used to work on the premises of the government,” he said.

“There are fears and concerns among government employees. The Taliban are assembling themselves in institutions. We were not anticipating this to happen so fast.

“My concern is how they are going to treat us as ex-government employees. I worked for the government for around ten years and did negotiations with the British embassy.”

The pair face a race against time to flee the country before the deadline for the withdrawal of coalition forces on 31st August.

Although Ahmad doesn’t currently have a postgraduate student visa, the University has given him a letter proving his eligibility for one. Under British law, a student visa would allow his family to live with him in safety in the UK while he studies.

Khan (also not his real name) does have a UK visa, but, like Ahmad, he chose to study remotely due to the pandemic and works in banking. He is hiding with his family in their apartment, while gunfire echoes in the streets outside.

He told The Times that the militants are looking for anyone with connections to Britain, America or NATO.

“If they know that I am studying in Oxford University and will see that I am in western education in their definition I will be their enemy … They are gathering information from relatives; social media and they are active in Facebook and Linkedin,” he added.

The pair face a race against time to flee the country before the deadline for the withdrawal of coalition forces on 31st August. The Taliban are reportedly blocking some Afghan citizens from reaching Kabul airport, and both Britain and the United States have advised their nationals to consider other routes of leaving Afghanistan. The situation deteriorated further on Thursday after bombing attacks in the capital.

On Wednesday, the Sabbatical Officers of Oxford SU released a statement offering “our solidarity with Oxford’s Afghan students and students who may be personally affected by recent events in Afghanistan.”

“We recognise the trying and unjust situations this will put some of our students in and the SU is committed to making sure that affected students are given all the support and resources they need and the opportunities they deserve,” they said.

Anvee Bhutani, President of Oxford SU, commented: “Seeing the scenes in Afghanistan and the way the crisis has been handled by the government has been absolutely heartbreaking.

“I’m committed to ensuring Afghan students at Oxford are able to continue their degree programs and are supported by their colleges and departments, as well as making certain that future cohorts are given the opportunity and resources to study here.

Furthermore, I hope to work closely with student groups, university efforts, and local initiatives that will help refugees settle into the wider Oxford community.”

Campaign groups such as Asylum Welcome and KAMA Oxford have called upon the University to accommodate Afghan refugees.

Jess Wallis, a finalist at Worcester College and president of refugee organisation STAR, told the Oxford Mail: “The University has such a vast amount of land and accommodation in Oxford. They can have a really big part in helping with refugees and they have the ability to do it.”