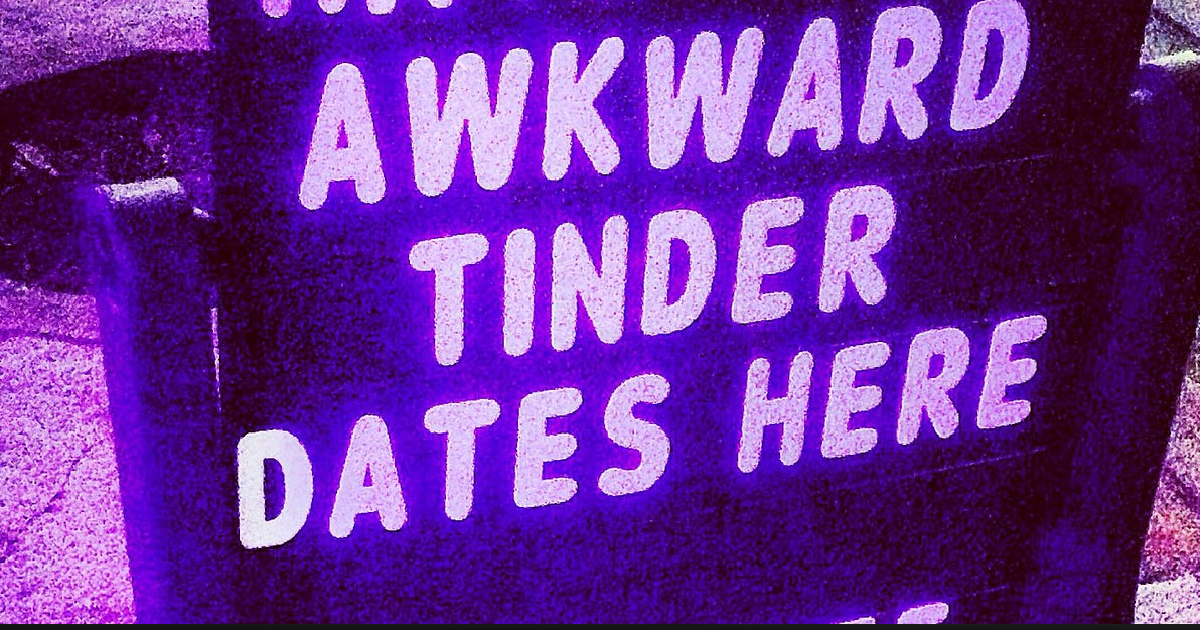 Oxford Dating: The 5 Types of Tinder

Picture this: you have crawled out of the depths of lockdown. You have cast off the oversized jumper you have been basically living in for days. With one swipe of your arm the pizza boxes piled high from your ongoing self care evenings meet their final resting place in the bin. You climb out of your joggers and throw open the curtains. The sun glints through the leafy trees. Spring has sprung, summer is right around the corner. It’s time to shave your legs.

And then – calamity hits. Our beloved buffoon BoJo hits us out of nowhere with another lockdown. Your heart sinks. You’ve literally just got out of the shower from shaving your legs. You have nowhere to go and now your legs are cold. Life couldn’t get any worse.

That’s where I was, dear readers. I had my whole Trinity ahead of me. The road was long and exciting. Hot Girl Summer was ripe for the taking, but alas, fate had other plans. And so, with smooth legs and plucked eyebrows, finally wearing underwear that didn’t resemble my dear 80 year-old granny’s pants I slumped in a library and got on with the only sensible thing to do in those draughty soulless places: I downloaded Tinder.

Obviously whilst I did this I kept my eyes peeled for potential soulmates. The Oxlove type of romances. I opened my laptop, had a flirt with HaithiTrust before realising we were never going to work in the long term and then got up and got a real book. Well, I actually got three and dropped one, but no Prince Charming came to my aid to pick it up. And I did give it a few minutes just in case. So, as a modern feminist, I picked it up myself, muttered, and stalked back to my desk. Tinder, it seemed really was the only answer.

So I downloaded it, informed them I was a Pisces, and started swiping away. This was the result:

Well naturally this one was always going to make the list. I rocked up at The Bear (I should’ve known from the off) and was greeted by a bear of a boy, so much did he embody the rugby player type. A quick flick of the eyes up and down told me everything I needed to know. Brown boat shoes, short shorts and a 3/4 zip jumper? If he didn’t hunker down in Port and Policy each week he was clearly in denial. After learning all about him for a couple of hours, he asked me what my name was again. I lied, dear readers. I did not want to be found again. I nipped to the toilet, went through my daily positive affirmations in the mirror, reapplied my war paint, let out a quick battle cry and returned. I made my excuses and he replied that he was disappointed; he really had wanted to explain to my why Nigel Farage was a top bloke, just misunderstood as all the greats are. I retorted “like Hitler?”, and was met with silence. As soon as I was round the corner I went to unmatch with him on Tinder, only to find the bugger had unmatched with me first! Seems reasonable that the mention of Hitler might kill the vibe a bit x

Sometimes, you need a break. Sometimes you don’t want to argue the intricacies of Blair’s New Labour or the adequate prison sentencing of paedophiles. Sometimes you need to venture out of the cloistered cloisters of college life. And I did. I ventured forth with the smug superiority complex of a colonialist adventurer. I bumped into him actually before I even got to our rendezvous. He was just waiting to pick up and asked if I wanted to wait. I was a bit flummoxed and agreed to it. After a very friendly interaction with his dealer who seemed delightful, we popped off to the pub. On the way he offered a key or two of ket to which I politely declined, it being early evening on a Tuesday and me still with an essay on the Black Death to finish. Considering he was clearly high as a kite I had quite a nice time and after some considerable flirting the question came up:

“Ooooh right. So you’re clever then?”

What, readers, do you say to that? The Christopher Columbus in me wanted to say, “well, yes”, but somehow that didn’t seem quite right. Anywho, after some more Tinder texting we decided to keep it casual, i.e: not see each other again.

3. The Beautiful but Boring (triple B)

I locked eyes on him (through Tinder). Those green orbs stared deeply into my soul. He was like something out of a Wattpad wet dream. Bloody beautiful. So we got chatting away and met up, for coffee, in the daytime. Good lord! And he was, stu-nning. Which, it turned out, was his saving grace: he was also intensely boring. The personality of a wet blanket. What with me obviously having a fire personality and him being a bit more of a fire extinguisher, I knew our love was doomed, like that of Anthony and Cleopatra, Romeo and Juliet, Faye and Teddy off Love Island (shameless plug). I was able quite easily to zone out of his dronings on and focus instead on his face, which was illuminated in the glow of golden hour and framed by the steam of his chai mocha latte Frappuccino.

I rushed back, informed my friends, making sure to show them his pictures and then decided, if asked, to definitely see him again. This decision raised an eyebrow. And I knew what they were thinking, he’s so boring. But you see, that’s how it works in the rom coms. The boring but beautiful jock opens up for the nerdy girl of his dreams…

4. The Oldie but goldie

You know the ones. They’re the friend of your college dad, study something remote and exciting like Physics or Arcadian (whatever that is). You make awkward eye contact in the library, you tuck that stray strand of hair behind your ear. You’re not like other girls, and he can see that too. So when you match on Tinder, you know the gods are smiling down on you. I’ve been there and I’ve most certainly done that.

We started with coffee and then went onto drinks, the rumours swirled, the college confession page exploded. I had not a care in the world. I was going to be one of those rare things. No, not a contented sober housewife, but a Tinder success story!

I didn’t understand his thesis at all. I wasn’t even sure where his library was. I don’t even think I cared. But just as quickly and unexpectedly as it began, so too did it flounder. And that is always the problem with a boy in the year above. They don’t have the common sense to rusticate and put their life on hold for you just so you can graduate together. I really wasn’t asking much, just that he postponed the investment banking job offer, whilst he applied for suspended studies based on trumped up reasons so we could have cute graduation photos together. Weirdly he didn’t see it that way. And although we’re still official Tinder matches, that is all that remains of us: a footnote in history, dust, simply a whisper…

His name was Ben. I was dubious. As my sister said, ‘All Ben’s are boring’. I was inclined to agree. But then, hunkered down in The White Rabbit, it turned out we had a lot in common. We’d both weirdly had the same dental procedures and went on similar holidays. Our siblings were the same age and our parents had met in the same way. Very creepy. What was weirder was that he lived in Oxford. Now, obviously I know people do, they’re the ones who complain about the students. But I’d never met such a rare specimen. I resisted the urge to get out my pad of paper and make notes and instead asked him about uni. He went to Cardiff and lived in Oxford. I went to Oxford and originally hailed from Cardiff. Things were getting weirder.

I went to the toilet and made sure I had not been fitted with a tracking device or microchip from which Ben might be downloading all this personal info and, satisfied he wasn’t a mega-stalker, returned to the table. I was really enjoying things. But then he asked if I wanted to get an Uber back, to which I said yes. And it was then, o readers, the wrecking ball hit. It had to be at my place because he lived at home. At home, in a house. In a house with his parents. His childhood house. He couldn’t come back to mine. That was an unspoken house rule. He just couldn’t. I was stunned. I retracted my agreement and slithered off into the night. Feeling really quite snakey. But, I thought, the similarities were perhaps too much. I cycled off into the night never to meet Ben again, but I did get a cheeky Instagram follower out of it – so at least my dreams of an influencer lifestyle aren’t dead.

My hot girl summer continues. It’s not an easy cross to bear, but someone must do it. So I continue to swipe, long after my thumb aches and my eyes blur. I continue to be hit up with corny one liners and explicit requests for hook-ups. I do all this because somewhere, out there, there is my soulmate. I also do it because I’m now at home for the summer and there isn’t a single thing of note to do where I live. Needs must when the devil drives!