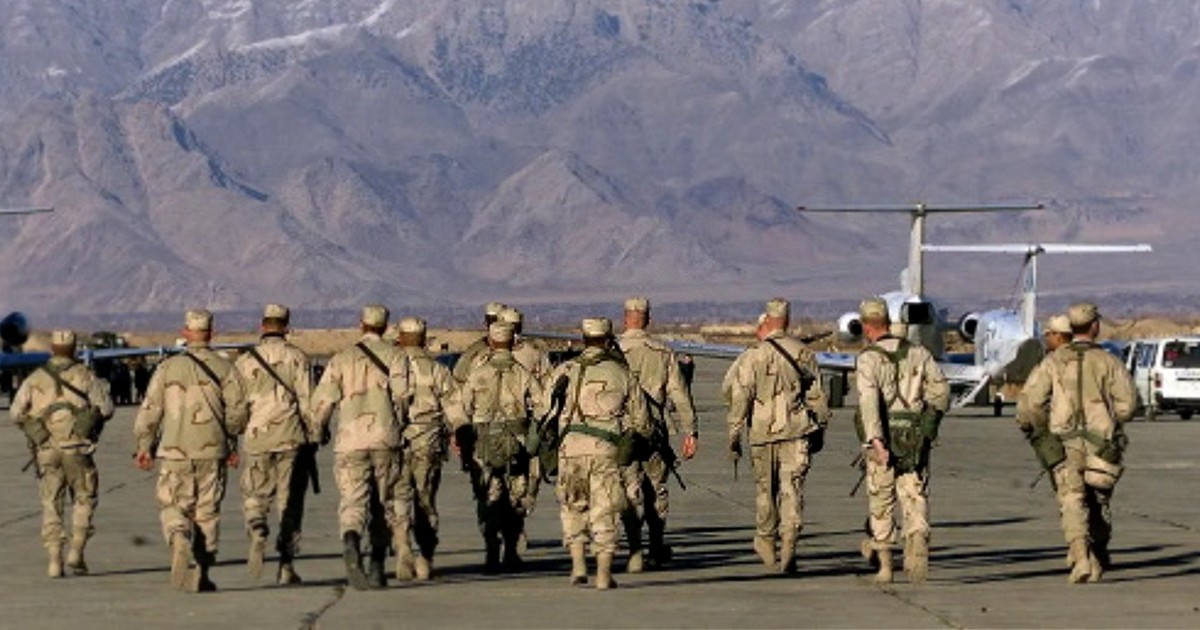 Will Neill and Dan Harrison

Image Description: A group of American soldiers facing a mountain.

Withdrawing from Afghanistan feels like a shattering setback, but this should not be confused with defeat. Although the West must reflect on its failings, there has been patient and painful accomplishments. As the NGO, Human Rights Watch has outlined, in 2001 only 3% of Afghan girls attended school. In 2020 that figure was 33%. A freer press and a more independent judiciary have been introduced. The average age in Afghanistan is 18, so a generation has passed into adulthood not knowing Taliban rule. However, it must be accepted that this progress is likely to come to an abrupt halt.

Despite the social and political progress made, the fundamental reason for intervention was to defeat the terrorist threat in Afghanistan, which had become a prolific breeding ground for Al-Qaeda terrorists. After 9/11, demands were made of the Taliban. They had to deliver the leaders of Al-Qaeda to the USA and close permanently every terrorist training camp in Afghanistan. These American demands were not met and Western intervention ensued. There has not been a single terrorist attack mounted from Afghanistan since 2001. The terrorist threat was defeated, so Biden’s decision to withdraw now, however arduous and disorderly the process, is right because the primary objective of the intervention has been achieved.

Biden’s strategy to withdraw now is a gallant one. His decision sprouts from a soil bed of rich and fertile foreign policy experience. He served as the chair of the Senate Foreign Relations Committee (2001-03 and 2007-09). Experience is not everything, but it is instructive. Biden has at least shown consistency in recent years on the issue of Afghanistan. He has been sceptical about troop surges in Afghanistan and warned President Obama against authorising the mission to kill Osama bin Laden.

“His decision sprouts from a soil bed of rich and fertile foreign policy experience.”

Admittedly, the withdrawal has not been as orderly as it could have been, especially as the USA had known since the conclusion of the Doha agreement in February 2020 that they were highly likely to withdraw in the short-run. The reasons for the disorder today do not lie in Biden’s decision to withdraw; the timetable for withdrawal, or the fact that there is a relatively small number of NATO personnel in Afghanistan.

The explanation of the situation today in Afghanistan lies in examining the history of the country since 2001. Yesterday’s errors have caused peril today. The West did not begin training the Afghan army until 2005. The building up of an Afghan air force was not prioritised for a decade. Not enough was done to induce successive Afghan governments to reform the country through tackling endemic corruption and the counter-narcotics programme was unsuccessful. As research conducted by the UN has illustrated, in 2020 there was a 37% increase in the acres devoted to opium production in Afghanistan. These systemic failures of Western policy have contributed more than anything else to the disorder today.

The alternative to withdrawal was worse. Some claimed that NATO forces should have stayed a little longer to aid the Afghan government to counter the Taliban’s advances. But because the vast majority of soldiers there were performing an advisory role, combat troops would have had to be sent and that begs the question of how many? A force of 5,000, as suggested by Tobias Ellwood, would have likely been insufficient. In 2015 the Taliban seized Kunduz, the sixth-largest city in Afghanistan by population. This was when total Western forces stood at 30,000 combined with a near 30,0000 strong ANDSF. Today, when the Taliban has won support from more local warlords, a significant Western military intervention would have been required in order to have supported Ashraf Ghani’s government. It is highly unlikely that the American or British public would support further military intervention, after several troop surges.

The West’s withdrawal marks a realisation that there can be no military solution. Only an agreement between the major parties in Afghanistan, including the Taliban, can ensure some modicum of stability in the country. In the West, it is time to end the internal recriminations and focus on utilising the leverage it has over the Taliban. The USA, UK and Japan remain three of the largest aid donors to Afghanistan and the vast majority of the NGOs providing basic goods and services are from Western countries. The West must focus its efforts on creating the right package of incentives (such as providing international aid) and potential sanctions if necessary (freezing the assets of Taliban leaders and their enablers), to apply maximum pressure on the Taliban to create as inclusive a government and as free a society as possible.

In May 2021, Democrat member of the U.S. House Armed Services Committee Jim Langevin wrote an open letter alongside ten other members of Congress to President Biden about Afghanistan. The representatives’ letter outlined recommendations to heighten stability in Afghanistan, measures that could protect the Afghanistan government, and sensible guidance for the administration following Biden’s decision to withdraw. The White House never responded. This high-handedness is representative of why the withdrawal from Afghanistan has been such a disaster. There was not a failure of intelligence; key evidence was clear on what could happen. Central to this international disaster is Biden himself, with the President rushing the departure, leaving key U.S. allies out of the loop, and callously attacking the Afghan military in defensive speeches. Biden promised that ‘America is back’: this could hardly be further from the truth, with the U.S. isolating from global affairs at a bloody cost.

“The high-handedness is representative of why the withdrawal from Afghanistan has been such a disaster.”

The Biden administration certainly inherited a poisoned chalice when it came to Afghanistan. Both Presidents Obama and Trump similarly promised during their election campaigns to withdraw all American forces from Afghanistan. Trump made this fact central to his movement, declaring his intention in 2016 to finally end America’s ‘forever wars’. Biden is finally the president to act on these promises. The Trump administration’s toxic deal with the Taliban in May 2020, which excluded the Afghan government and called for withdrawal without any conditions forced Biden’s government into a corner. Nevertheless, the blame cannot solely be placed on Trump; this botched withdrawal is Biden’s mess.

The Biden administration has tried in the last week to place the blame of the rapid Taliban takeover on a failure of intelligence. In his speech on Monday, Biden stated that ‘this did unfold more quickly than we had anticipated’. However, the CIA warned both the Trump and Biden administrations of the clear potential that the Afghan government could collapse. Douglas London, former counter-terrorism chief of the CIA, stated that both administrations were aware that ‘Afghan forces might capitulate within days’, and this was a risk that both accepted. Biden made much on the campaign trail of his foreign policy experience, touting his chairmanship of the Senate Foreign Relations committee as proof of his expertise in comparison to Trump. However, in his first major foreign policy decision as President, Biden has failed.

“However, the CIA warned both the Trump and Biden administrations of the clear potential that the Afghan government could collapse.”

More than just rhetoric, the nature of the withdrawal has been shockingly harsh. The evacuation has been poorly planned, the visa processing for thousands of Afghans has been far too slow, and the opportunity to get U.S. citizens out of the country earlier has been missed. Tens of thousands of interpreters remain imperiled in Afghanistan, they could have been safely removed whilst the Afghan government still controlled cities and air bases.

Questions remain about the nature of the Western alliance, with the so-called ‘special relationship’ between the U.S. and the UK in tatters. British governmental fury at American withdrawal has been voiced by Conservative MPs and former servicemen. Prime Minister Johnson’s attempts to contact Biden over thirty-six hours as chaos unfolded in Kabul were all ignored.

Western attempts at nation-building in Afghanistan have failed. There is a lack of democratic support for the maintenance of Western forces in the country, both in the U.S. and Europe, as well as Afghanistan itself. Withdrawal was inevitable; but this chaotic withdrawal was far from inevitable. This is the longest war in American history, thousands of American and European military lives lost, alongside hundreds of thousands Afghan civilian lives, and tens of billions spent and all for what? This project of twenty years collapsed in a matter of days. The Taliban once again rule Afghanistan, the Transatlantic alliance has never been weaker, and countless lives have been lost for nothing.