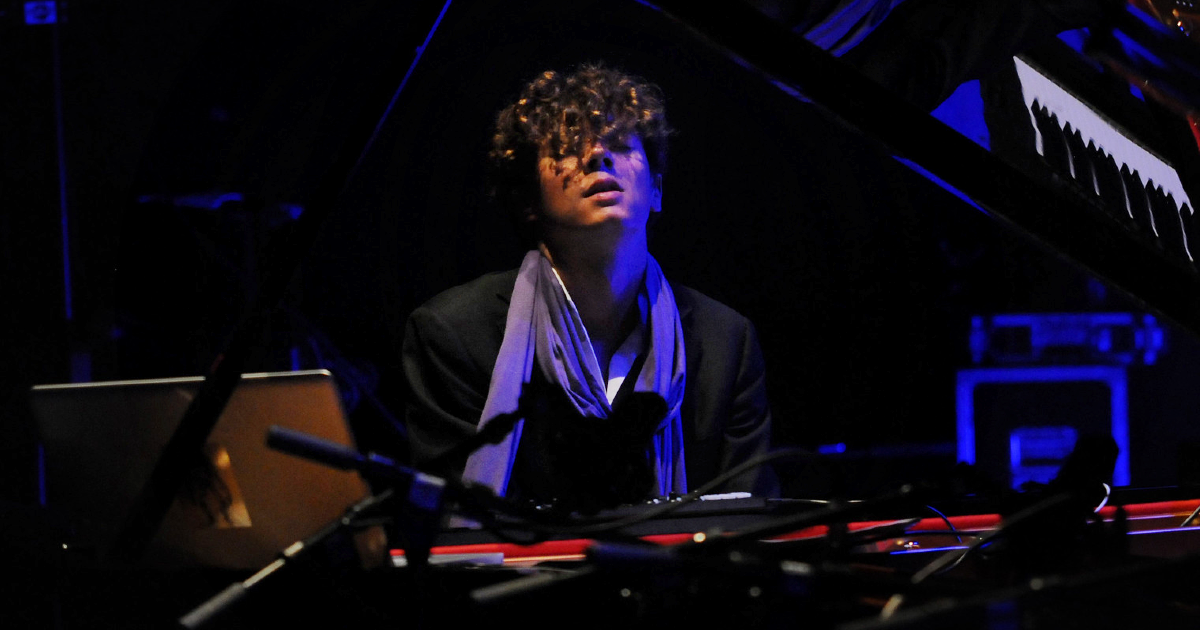 Image Description: Francesco Tristano performing on piano with a laptop by his side

Pianist and Composer Francesco Tristano is somewhat of a musical vagabond. Still in his thirties, he boasts an incredible career which unceasingly voyages through the distinct artistic realms of classical, contemporary and techno music. Having prioritised the music of Bach during his conservatoire studies, he made the composer central to his own identity as a ‘classical pianist’. Meanwhile, his subsequent engagements with contemporary and electronic music through his studies fuelled a desire to study the associated techniques and engrain them within his own identity as a performer.

Yet, as demonstrated in a brief documentary about the artist (produced by the German broadcasting company WDR), this multifaceted commitment to music proves exhausting, as well as exciting. On one particular day, Tristano is filmed flying from his home in Barcelona to Zurich for a rehearsal with the Zurich Chamber Orchestra, where he is booked as a soloist for Mozart’s Piano Concerto No. 8 for a concert the next day. On the same day, Tristano flies to Malaga to perform a live-set at a nightclub, where he is mixing from the decks and improvising on a synthesiser.

Tristano’s influential album, bachCage. Here, recordings of music by Bach and Cage are coloured by an assortment of techno and trance effects.

Ruthless? Tristano would believe otherwise. From what I understand, this strenuous artistic project strives to show audiences that the contrasting genres he engages in share a lot more in common than divide. In his own words: “Music is part of the same river of sound: universal, one and indivisible”(Tristano, 2016). Tristano’s enthusiasm is admirable, but my position as a musicologist awkwardly impels me to scrutinise the wording of his proposal. I say ‘wording’ here because, as discussed later, what he writes here does not reflect what he actually means. To open, there is that convoluted discourse surrounding the dichotomy between ‘sound’ and ‘music’, but that merits no unpacking here. But it is Tristano’s own understanding of musical ‘universality’ – far removed from what musical universality actually entails – that I take issue with here. Simply put, music as a ‘universal’ language is understood not in terms of what musical genres and cultures have in common, but heralds their distinct features, which demonstrates the vast diversity of music across cultures. Consequently, this understanding of ‘universality’ enables us to appreciate Baroque, Electronic and Contemporary music as clearly delineated genres, which is a liberating thought.

In my opinion, Tristano’s prose is at times not clear, but I still get where he is coming from. In the documentary, he describes Bach as “some kind of ‘proto-techno”, because the machinery of the basso continuo reminds him of thumping bass of techno. As an avid listener of both baroque and electronic music, Tristano’s discussion of Bach through the lens of techno was certainly illuminating. I believe he’s onto something. Through his unique position as a musical polymath, Tristano’s use of ‘techno’ terminology to illuminate stylistic features is a tremendous way of introducing audiences to Baroque music, and vice versa. Especially with Baroque music, whose features are taught through the conventional avenue of classical performance, explaining musical genres through normative terms can greatly improve musical ‘accessibility’. This is what I believe Tristano actually means.

To close, I would like to illuminate my points with reference to Tristano’s influential album, bachCage. Here, recordings of music by Bach and Cage are coloured by an assortment of techno and trance effects. In the liner notes, Tristano justifies his use of electronic effects as a way to “blur the borders” between the two composers. Hearing these works through this electronic filter was certainly refreshing, but it did not bring these composers together for me. They are all but too dissimilar. Bach’s music zings and is full of artifice. Cage’s music is contemplative and zen-like; the piano is transformed into a gamalan. The electronic tinge was certainly provocative, but in a different sense. By hearing the added reverb in the Gigue of the Bb Major Partita, I could not help but experience Bach’s well-known movement as a techno track, excitedly waiting for the climax to arrive.

Accessing the Baroque repertory through the lens of electronic music can certainly attract new audiences who would not have experienced baroque music otherwise. This is what I believe Tristano’s legacy should entail.

You can listen to Francesco Tristano pieces to accompany this article in a spotify playlist curated by Filippo Turkheiumer by clicking here .