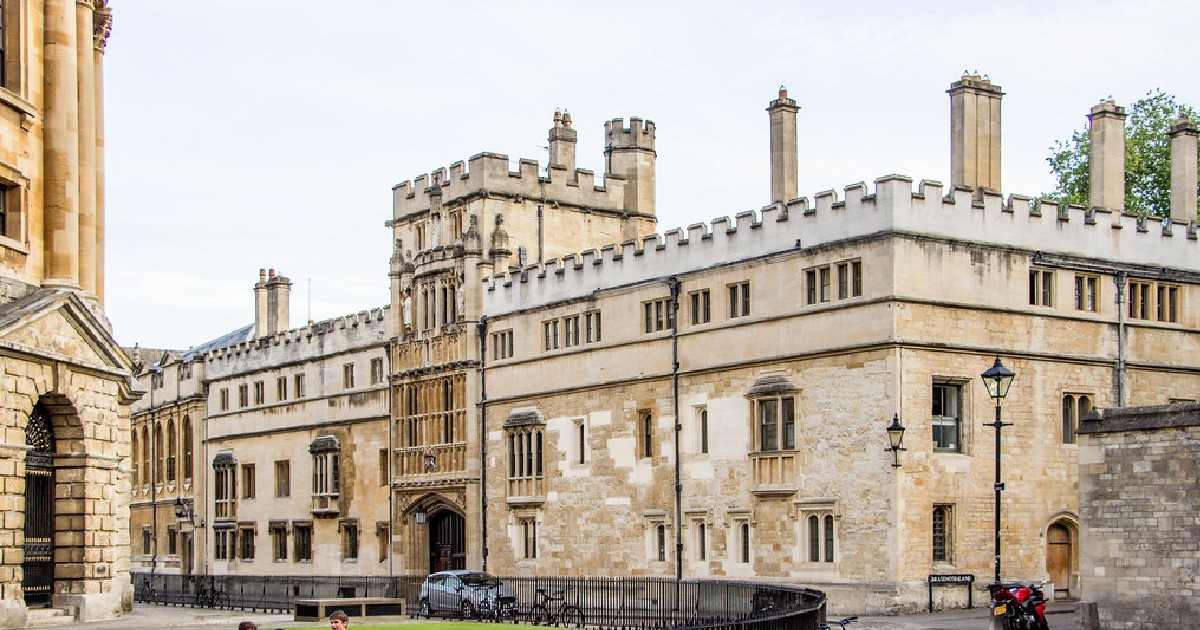 Image Description: the front of Brasenose College, from the steps of the Bodleian library.

Brasenose College has been criticised by the student campaign group Oxford Worker Justice after a job vacancy advert appeared to pay less than the Oxford Living Wage, and seemed to inform applicants that there would be no break on a ten hour night shift.

The campaign group, which describes itself as “a group of students and workers campaigning for justice for workers at the University of Oxford and its constituent Colleges”, criticised the listing in a series of tweets last week.

The first in the series of tweets reads: “Another week, another chance to apply for a terrible job at Brasenose”. The series of tweets then goes on to claim that the minimum wage listed in the advert, £9.02 an hour including holiday pay, would equate to around an £8 an hour real wage. The campaign describes this as a “poverty wage”.

The job listing itself specifies that wages for the casual Reception Porters positions will vary between £9.02 and £9.99 depending on age. It also appears to say that there will be no break given on night shifts, which are between 9PM and 7AM. The campaign argues that this would contravene employment law, which guarantees the vast majority of staff a break of 20 minutes for every 6 hours worked.

The Oxford Living Wage, which is set by Oxford County Council and is a voluntary hourly rate, was increased to £10.31 in April this year. Oxford University made a commitment in 2020 to pay all workers above the Living Wage, but this decision does not automatically apply to individual colleges. The national Living Wage is £8.91, and minimum wages for people under the age of 23 are lower.

Brasenose was among colleges that were criticised in a piece by the Financial Times earlier this year, after it was revealed that several colleges were paying staff less than a living wage. The investigation published in May 2021, found that almost 1,000 workers across 31 colleges were payed less than the Oxford Living Wage. According to the report, Brasenose College had paid 22 workers under the age of 21 £8.05 an hour. Brasenose told the Financial Times that it often employed students for bar work or for open days.

In an exclusive statement to The Oxford Student, a spokesperson for the Oxford Worker Justice campaign stated that the job listing was “sadly unexceptional”, and emphasised that many workers who were immuno-compromised had felt fearful of missing work even if sick.

“This post is sadly unexceptional in Oxford. The colleges have long relied on, and profited off, a low-paid precariat — largely made up of migrant workers and women. In a city where rents are exorbitant, childcare expensive, and remitting money home is simply non-negotiable for those with families overseas, it is without doubt that the colleges’ policy of poverty pay has made the COVID-19 situation even more lethal over this past year.”

“The salaries that many workers receive leaves them with no choice but to rely on informal childcare arrangements, live in overcrowded housing, and they are left fearful of missing work even if they are sick. This has clearly put them at greater risk from COVID-19, especially for those who are immuno-compromised.”

“As students we must demand a complete overhaul of employment conditions at Oxford. If you recognise the importance of decolonisation of the institution, then your focus must extend to the continued exploitation of migrants and people of colour that keeps our university running.”

Anvee Bhutani, the SU President, also criticised the college for failing to pay the Oxford Living Wage, and emphasised that she would be campaigning to encourage Brasenose and other colleges to pay their staff in line with the recommended wage.

“It is disappointing to see that Brasenose College are still advertising and employing people in positions that pay less than the Oxford Living Wage, despite the University’s commitment to pay living wage last year. With one of my manifesto priorities being to campaign for the living wage to be paid across colleges in line with the University policy, I have already emailed the Brasenose College Domestic Bursar with my concerns. I will also be bringing this up in relevant committee meetings with the hope that Brasenose and the other colleges that don’t yet pay a liveable wage raise this soon and promote better working conditions for their staff.”

A spokesperson for the college responded to the claims made by the campaign group:

“The College considers many factors when setting pay rates and the overall package of benefits offered to our staff. We know from feedback and from our application and retention rates that the non-pay benefits offered to our employees are highly valued, so take this into account when determining the appropriate package to offer for each post. But we are also aware that the jobs market has changed a lot since the start of the pandemic, so we continue to monitor and adapt pay across different parts of the college. We are already reviewing the way we recruit and reward additional porters, in advance of our next round of recruitment.”

They further added: “The College is very proud of the professionalism and dedication of all our employees, as we work to support our student and academics. We were pleased to be able to protect jobs and wages for staff and casuals during the pandemic, and are determined to continue to offer satisfying jobs on competitive packages to recruit and retain excellent people throughout the college.”

This piece was updated to include comment from Brasenose College on 16th September 2021.