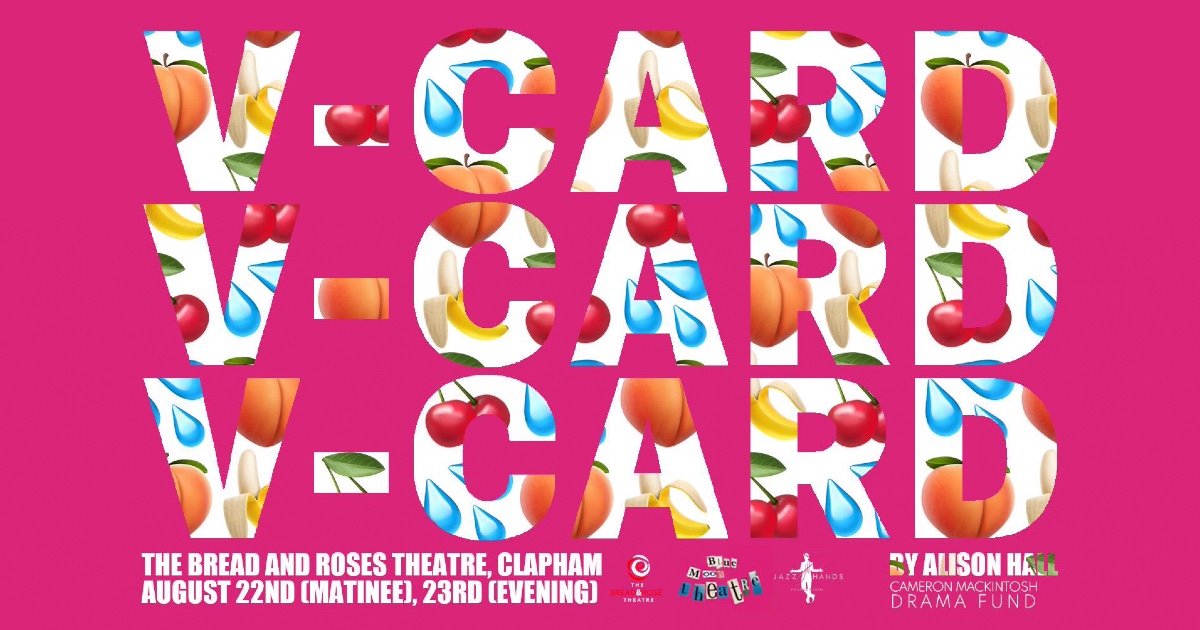 Image Description: The words ‘V-Card’ repeated three times on top of each other in white with peach, banana, cherry, and water emojis against a bright pink background.

When a play that looks at sexuality, relationships, and being yourself is as sharply written as V-Card is, one has to laugh, cringe, and cry, sometimes all at once. Performed at the Bread and Roses Theatre in Clapham last week, along with a radio performance at the Edinburgh Fringe, Alison Hall’s debut play provides a brilliant insight into life at university: one so realistic you have to applaud and shout ‘Fuck it!’ in self-celebration by the end of the show.

Despite starting out as a stage play to be performed many moons ago, the twists and turns of life and the pandemic led to V-Card being first cancelled, then re-staged last Michaelmas, then turned into a radio play, then cancelled again, before finally making it to the stage in Clapham. Thank God (who does actually appear in the play!) Alison and producer Ana Pagu persevered. The physical comedy and quiet intimacies onstage provided the dialogue with the necessary presence to remain touching as well as funny, and the costume design captured the university vibe perfectly. Performed in a black box space with minimal set design, the focus remained squarely on the relationships between the characters, allowing each actor’s portrayal to shine (and still being better furnished than your average student pad).

V-Card’s plot centres around Hazel, a girl trying to ‘get laid’ before her twentieth birthday. Played extraordinarily sensitively by Ellie Fullwood, it is not so much her aim to lose her virginity by this contrived goal, but rather that of her housemates. All three stooges are brought to life with comic skill and variety by Lorcan Cudlip-Cook, Pip Lang, and, of course, Gregor Roach, who deserves special mention for the sheer brilliance of his deadpan delivery as Dylan throughout (“Wouldn’t the V technically go ON her V? I’ve never really been sure how it all works”, he muses on the details of WLW). Together, Hall creates a comic but heartfelt depiction of university life, with all its sticky details: That friend’s band you never heard of after first year summer? That ‘Freaky Freddie’ you heard of doing the rounds at the club? ‘Adventures’ at Reading Festival or the RadCam? All find their way into V-Card, whose characters and dialogue made me alternate between worry and awe for Alison Hall’s own university experiences, and key comic eye for putting them onstage.

Yet behind this wry sense of humour and affection for university life lies a more heartfelt message to V-Card, regarding sexual consent and self-reflection.

While all of Hazel’s potential suitors run the gamut of university archetypes – Glyn Owen’s ‘Freaky Freddie’ as the posh boy wearing salmon coloured chinos, James Newbery’s nice guy performance as ‘Amazing Alex’, and of course Grace de Souza’s uber-cool Robin – Hall manages to deconstruct them all in meaningful ways: Freddie remains respectful of boundaries during an awkward trip to the bedroom, while Alex loses his cool when Hazel turns him down. Being able to turn the comedy into horror as the lovers buck the stereotypical trends is to Hall and the actors’ credit: James Newbery’s subtle shift from “I respect your position” to “you’re being such a bitch” shocked the audience and forced them to question notions of ‘good’ and ‘bad’ people and relationships pre-established by society.

And yet V-Card deepens even more, adding a very real God, Jesus, and Satan to the show to further deconstruct these societal preconceptions. Protesting at God’s “trying to guilt trip me”, Hazel’s ‘God dreams’ are a highlight. And with a delightfully camp Satan and immature Jesus multi-roled by Glyn Owen’s Freddie and Newbery’s Alex, respectively, the play cunningly links this religious guilt to societal expectations while remaining delightfully surreal. That the play climaxes (ho ho ho) with Ellie Fullwood clearly relishing being able to tell God to “fuck off” and wrestle Satan back into Hell adds a further verve to V-Card’s central message of self-realisation: Hazel frees herself from the expectations of God and ‘the flock’ to have sex at her own speed and discretion. Though there is no more introspective evaluation of a relationship within religion beyond this comic wrestling match, it is a small price to pay when the result is such raw entertainment onstage.

Alison Hall and her cast have put on an absolutely fantastic mix of comedy and heart, entertaining their audience while simultaneously alerting them to the truth that virginity – and sex in general – is no be all and end all.

Perfectly encapsulating university life, it remains clear that while this sell-out show is the first of surely many triumphs for all involved, it is hopefully not the last. Alison Hall may have to get herself to therapy for the experiences that went into creating the hilarious V-Card. But she should most certainly get to writing again.