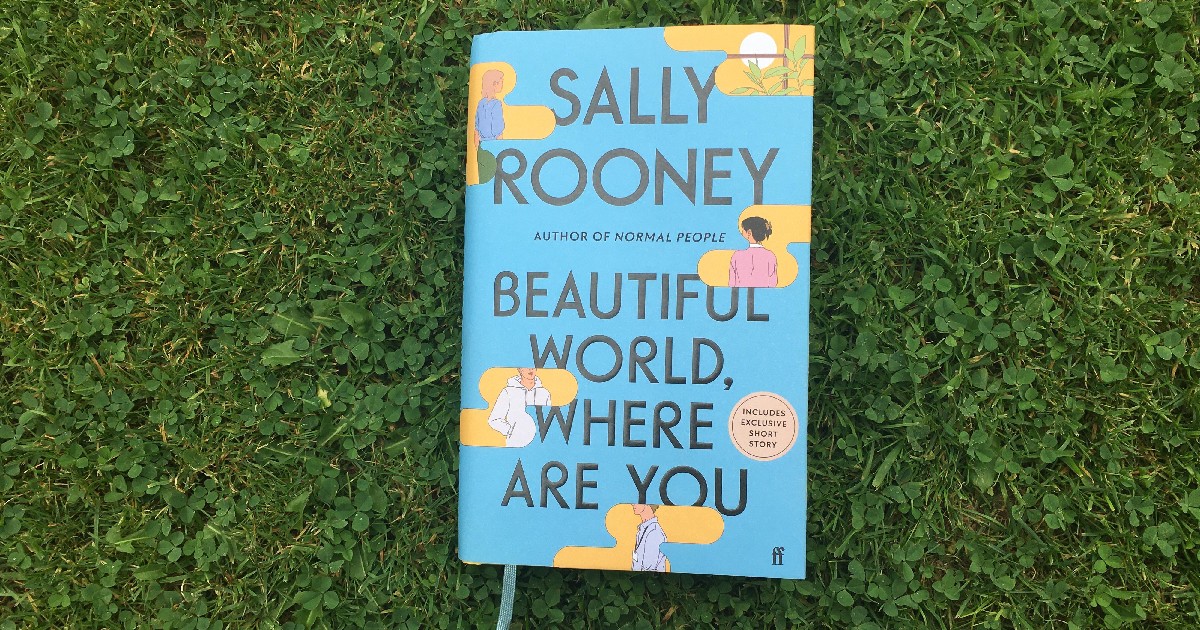 Sally Rooney’s ‘Beautiful World, Where are You?’ Review

Image description: the blue cover of Sally Rooney’s ‘Beautiful World, Where are you’ on a background of grass.

Sally Rooney writes books about people. This could be the main message of her new novel: the protagonist Alice is a successful author who writes books about people. She’s very wealthy, and the toast of New York, but she doesn’t like being famous. Could this mean that Sally Rooney doesn’t like the media rounds and endless publicity that come with being the next 20-year-old-something? Do we really care as long as she churns out the next great work that someone fit can play on TV? Do I still giggle every time there’s a penis shot in Normal People…? These are the central questions of her new work.

The novel centres around Alice, who is recovering from a mental breakdown by living for free in a massive house, and by taking Felix, who works in a warehouse to Rome. He doesn’t treat her like a celebrity, and somehow ‘knows’ her, and also at points in the novel wants to sleep with her mate Simon. But Simon is actually in love with both God and Eileen, Alice’s best friend from University, who works for a literary magazine. I won’t spoil the ending, but much like a Netflix rom-com, you might work it out before you get there.

The plot, such as it is, is simple, and the characters revolve around one another with just enough backstory to flesh out their reactions to the stimuli with which they are presented. The lack of punctuation for speech is clever/irritating/pretentious (delete as appropriate), but given that it is a technique Rooney has employed before, if you didn’t like it then you might not be onto a winner here. The emails between Alice and Eileen are a neat conceit to hide the growing chasm between the friends, but they are also arguably clumsy. The sex scenes are like the ones in Normal People i.e., when this is inevitably adapted for TV, you probably won’t want to watch it with your parents in the room.

Whether you enjoy the novel or not, I think, depends on how much of the wide-ranging pseudo-philosophical emails you are willing to put up with (or engage with, I guess). The emails between the friends are almost exactly like listening to English students at pres: fun occasionally, but you know someone is going to bring up religion or get upset about private schools. In fact, Eileen does argue whether she is working class with someone at a party, so it’s exactly the same as pres. Some of the discussions are clumsy, whether purposefully or not, and I agree with Alice that people only want to read about sex and friendship, which is why I skimmed the ‘thinky’ bits to get to the next scene about sex and friendship, which is without doubt where Rooney shines.

Whether you enjoy the novel or not, I think, depends on how much of the wide-ranging pseudo-philosophical emails you are willing to put up with

How good you think the book is, therefore, depends mainly on how much benefit of the doubt you are willing to give Rooney. Yes, the scenes with the characters are interesting and engaging, but that wouldn’t set the novel above many other writers who also write about sex and friendship, and do it very well. The emails are formulaic and potentially a little staid. If you are willing to grant that her ‘Former English students discuss things in an English student way’ is self-conscious, then the bounds of the piece grow wider and more interesting. This is especially so when you consider that the long-suffering Simon, who is in love with Eileen and also God, is ‘in politics’, and so is probably influencing the course of other people’s lives (he believes for the better, sort of). If you aren’t willing to give her that benefit of the doubt, then you will probably think that it’s all a little bit naive (unless you are 16, because then you will think it’s all-knowing, because that’s what people are like when they’re 16).

Yet, just like Rooney’s other works, I did devour this book. If you enjoyed her other stuff, you probably will too. If, however, you thought Normal People and Conversations with Friends were just middle-class white people complaining about middle-class white things and shagging, then I am afraid it is more of the same.