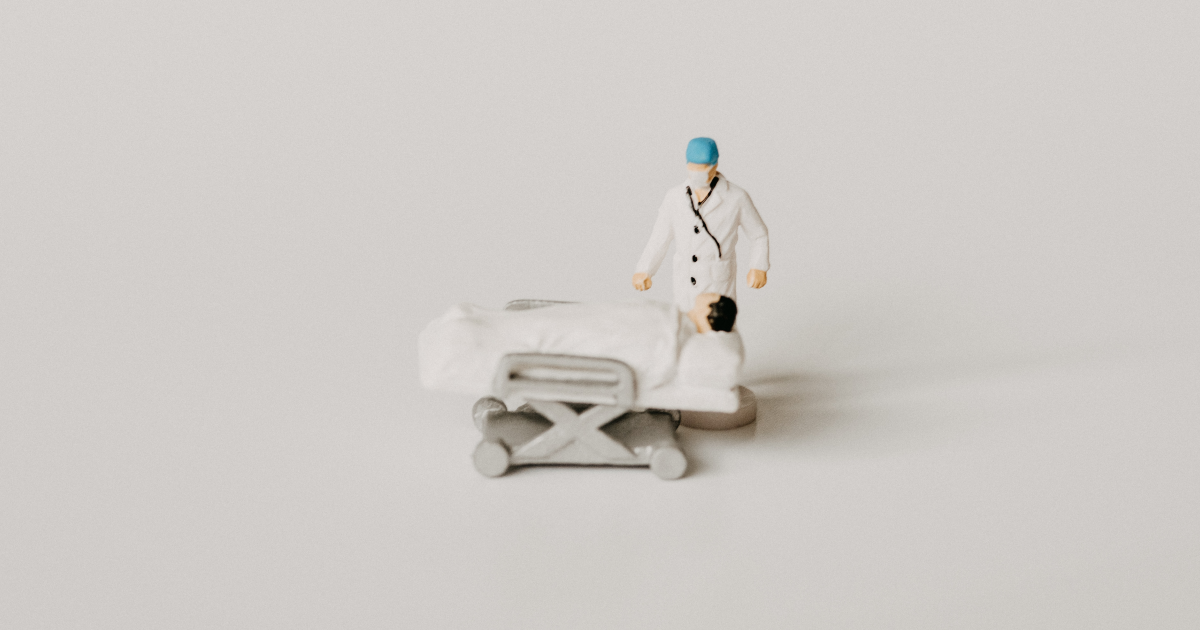 Image Description: figurines of a doctor next to a patient in a bed, against a white background

It’s October 2019; I have just started a gap year before taking up my deferred place at university. Hopefully, I think, this will be a year of rest and recovery and working with Birmingham Children’s Hospital. At the moment, however, I’m sitting in the neurosurgery waiting room of the Queen Elizabeth Hospital, here to receive the results of an MRI of my brain tumour. It has been more than three months since the scan itself. This appointment has been moved back on four occasions. This, along with my record of stable scans since my brain haemorrhage and neurosurgeries in 2015 and my clinician’s confidence that my tumour will remain stable, reassures me of good news. My neurosurgeon enters the waiting room to call me in. He is on time, which worries me.

My tumour, I was told, had grown. At this point, I instinctively shut off from my emotions: I needed to be alert, engaged, and incisive. I needed to understand exactly what was being said to me and exactly what I wanted to know. They showed me the scans and, even to my untrained eyes, it was obvious. The growth wasn’t huge, but it was significant, and it was a problem. They told me I would need treatment.

In December, my parents and I moved to Manchester for my six weeks of daily proton-beam therapy. Over the following year, I completed my treatment and moved back to bonny Birmingham. The following months are, for me, a blur of recovering from fatigue, starting my work at the Children’s Hospital, and then lockdown. Amidst all of this, my post-treatment scans were returning worrying results. It seemed my tumour had grossly enlarged. This increase in volume can apparently be a relatively rare side-effect of proton-beam therapy; it signals that the treatment has worked, but it can put pressure on other parts of the brain. Particularly unsettlingly, there is no definitive, non-surgical method of differentiating between this kind of expansion and actual growth. Judging that, on balance, this change was probably a reaction to my radiation therapy, my clinical team held steady and no surgical intervention was made.

The thought of more neurosurgery was too frightening to allow into my mind for more than a few fleeting moments.

Over the coming months, my scans suggested that the increase in my tumour’s volume was the result of post-radiation swelling, rather than the more malevolent possibility that it was actually growing. However, because of the tumour’s ‘nasty place’ (a masterful and wholly accurate description by my neurosurgeon), its swelling had some effect—potentially temporary—on my vision. In July, however, a scan suggested the tumour’s volume was decreasing at least, to my immense relief. Then in September, less than a week before moving to Oxford, I had another scan. This, I realised, would decide whether I could move to university or whether I would require further treatment. The thought of more neurosurgery was too frightening to allow into my mind for more than a few fleeting moments.

My neuro-oncologist—skilled, committed, and compassionate—agreed to analyse the results as soon as possible, so as to let me know the outcome before I moved on the 2nd of October. With this uncertainty I packed very little, knowing that I might have to stay in Birmingham if further treatment was required. I received her phone call on the evening of the 29th of September. I knew that what she said would decide whether I would have another year of treatment, or whether I would be able to go to university and have to speed-pack. The news was good, to my overwhelming relief. Her powerful relief radiated out, even over the phone: the scan showed the tumour decreasing in volume; the treatment was successful. Oxford, here I come!

Like all freshers, my first few weeks and even months at university were surreal. Meeting people, adapting to college life, and adjusting to the academic intensity seemed to take place along an indefinite and tangled timeline. Quietly, behind all of this, were the continuing ripples and waves which spread out from my diagnosis into my daily life. Each morning I would take my dose of dexamethasone, a powerful steroid, to further reduce the swelling of my tumour. At the same time, I was vigilant and watchful, subconsciously waiting for one of the many side effects listed on the leaflet to appear, which range from the mundane to the comic-book horrific. After this, I started to take another medication and had to clean the syringe used to dose it, which brought with it the daily challenge of navigating a sink stuffed full of plates, pots, and pans to sanitise the pipette. It created a surreal juxtaposition between a prototypical student kitchen and a morning medication routine.

The trauma of six years of medical turbulence created a poignant difference between the experiences of my peers and I.

It’s these discontinuities and contrasts that, at times, felt jarring and painful. My hospital check-ups continued, so it wasn’t uncommon for me to disappear for a day and then return to university life. Fatigue restricted the time for which I could work and socialise, and the trauma of six years of medical turbulence created a poignant difference between the experiences of my peers and I. Navigating this was difficult and was exacerbated by the pandemic.

Over the years, this boundary has begun to break, blur, and blend. Friendships are founded and based, I hope, on mutual respect, compassion, and interest. The academic life of Oxford is everything that I hoped it would be and more. I now realise, after months of doubt about whether it would be ‘right’ for me, particularly after my tumour’s growth and treatment, that I have made the right call. Sometimes, however, my tumour and its effects can feel like a smoke bomb. Something that, if mentioned and released, produces panicked shock and stunned silence, and is something to be avoided and retreated from.

This situation doesn’t have a definitive ending. Instead, it changes, develops, and, hopefully, keeps improving. For the start of my second year, I’m finally medicated with everything I need, unlike the last few years. This term will begin not with a surgery-deciding phone call, but with a return to the familiarity of Oxford. I will still live with the late effects of my tumour and with the emotional waves and reverberations those experiences have produced, but I’m also comfortable and confident with that part of me, far more than I was last year. I’m content that, far from being the frightening feature it can often be deemed to be, it’s an important part of me, one which I can be proud of and use to better listen to and learn from the lives of others.