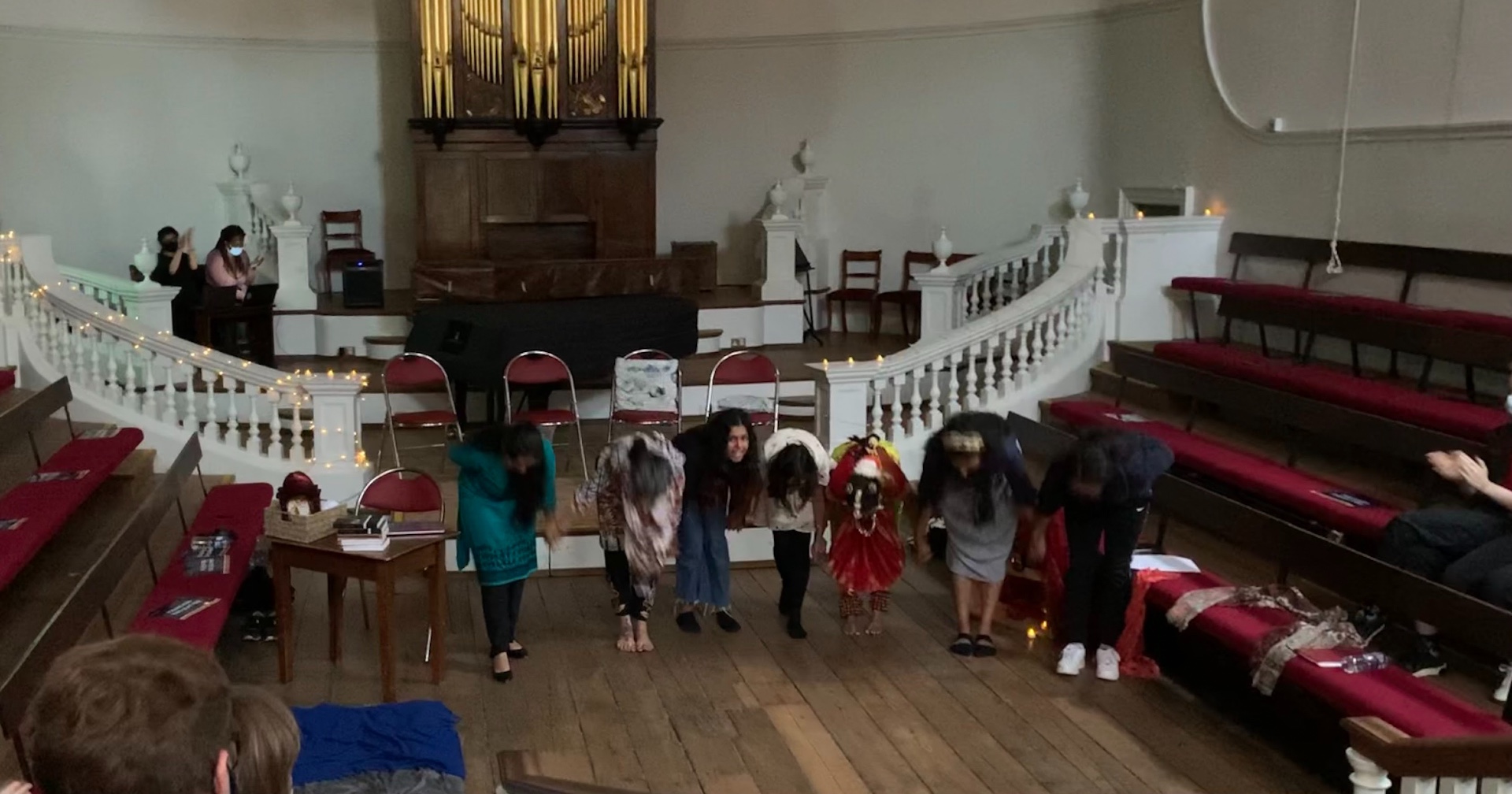 WHAT HAPPENS WHEN YOUR WORLD BREAKS DOWN?: A Review

Image description: The cast bowing after the performance.

In a very unusual academic year, the ninth week of Trinity saw Haldi + Co Productions, founded by Oxford student Neetu Singh, stage two highly successful live performances of their play ‘WHAT HAPPENS WHEN YOUR WORLD BREAKS DOWN?’. The play, which was also written, directed, and produced by Neetu, documented the lives of six South Asian women, some of whom are connected through their regular sessions at a university counselling service. The production was also advertised as ‘featuring heartfelt poetry & spoken word, Indian classical dance and a blend of Hindustani music and singing’, and I was excited to see how it would all come together.

The play took place in Wadham College’s Holywell Music Room. Considering that it was a last minute switch, the venue was an extremely good choice – small enough to portray the intimacy woven into the script, and varied enough to allow for creativity in staging direction. Having the therapist (played by Jahnavi Bhatia) standing behind the audience during the counselling session scenes was a staging choice I particularly appreciated, as the contrast of her disembodied voice with the highly personal view we got of the characters really allowed their emotions to shine through.

Grief and loss were the two main themes, and we got to see how each character struggled with these through heartfelt monologues, poetry (written by Cia Mangat), and even small relatable moments.

Grief and loss were the two main themes, and we got to see how each character struggled with these through heartfelt monologues, poetry (written by Cia Mangat), and even small relatable moments. Familial relationships formed a big part of the script, with Ibbani (played by Amira Izhar) having lost her grandmother, and Firdous (played by Avanthika Balaji) having lost her sister. On the other hand, Devi (played by Pragna Challapalli) had lost her partner, revealed matter-of-factly to be female during her later dialogue, a quiet but important moment of queer representation amongst a highly cultural play.

Therapy being the connection between the different women was another important moment of de-stigmatisation that should be highlighted.

Jahnavi, who played the therapist, argues that mental health and therapy unfortunately remain taboo topics in Indian culture, stating that “They are grossly misunderstood, and that allows people to get away with being dismissive and insensitive to it. In some ways, it’s appearing to get better but this is limited to select sections of society and therapy still remains largely inaccessible, which makes it hard to break the stigma.”

One element of the play I enjoyed immensely was the presence of Dadi (played by Jigyasa Anand), Ibbani’s grandmother, who is only revealed to have passed away halfway through the play. She sits next to Ibbani in all the counselling sessions, kneels in quiet prayer with her, and is a constant presence in the background of Ibbani’s individual scenes. The clever reveal – that she was the object of Ibbani’s loss all along, and isn’t actually there – is an excellent portrayal of how physical the presence of those we have lost can seem, especially in the spaces and activities they used to inhabit.

Dadi’s character is not just a manifestation of Ibbani’s difficulty in letting go, but is also fleshed out within the script in a monologue that grounds the play firmly in historical context.

As Jigyasa stated, “Central to Dadi’s character is her experience of the 1984 Sikh genocide. Before this play, I was already extremely tired of seeing plays about World War One and Two and the suffering it caused England. It is really important not to forget the experiences of all the places in the world that have seen – and are still seeing – unrest often as a result of British occupation. I was really happy to see this acknowledged in Dadi’s dialogue.”

The actresses were all phenomenal, producing visceral performances that explored the different facets of grief and reactions across different people. Ibbani, described as sarcastic and witty, oscillates effectively between resentment and an ugly grief thrown into sharp relief by her raw dialogue. In contrast, Firdous is highly expressive in her anger and sadness, while Devi’s sadness is quiet and contemplative, often overshadowed by the other women in the counselling group. However, the intensity of their respective individual monologues sends a strong message about the disparity between outward perceptions and inward experiences of grief and pain, acknowledging that we all respond to and carry pain differently.

Dadi’s character is not just a manifestation of Ibbani’s difficulty in letting go, but is also fleshed out within the script in a monologue that grounds the play firmly in historical context.

The cultural elements to the play were highlighted by gorgeous musical performances (Shreya Banerjee, Scott Hexall, Surat Mahato) and traditional dance (Sharvi Moheshwari). Sharvi performed twice in traditional garb, and notably choreographed one of her dances to Missy Elliot: an unexpected bold choice but one that definitely paid off.

Speaking about combining the elements of traditional Indian Dance with songs that are not traditionally Indian, she said, “With the moving times, as an artist, rather than treating fusions as an act of indulgence, we should perceive it as a chance to grow and evolve. You not only learn new things as a dancer, but it also gives you the scope to understand and amalgamate different traditions to reach a wider audience!”

Overall, the play was very well put together, and all credit has to go to the crew and production team for a valiant effort that really shone through: Jenna Colaco, Susmita Dave, Cia Mangat, Fatima Mohamed, Aman More, and Libby Russell. Haldi + Co Productions also donated all profits from ticket sales to charity; £200 was donated to Medical Aid for Palestinians to help supply urgent medical needs to the people of Gaza, and £210 was donated to GiveIndia Fundraisers, specifically to SNEHA, to fund healthcare for women and girls in India. To keep up with Haldi + Co Productions, they can be found on Instagram at @/haldicoproductions, or on Facebook at ‘Haldi & co productions’.