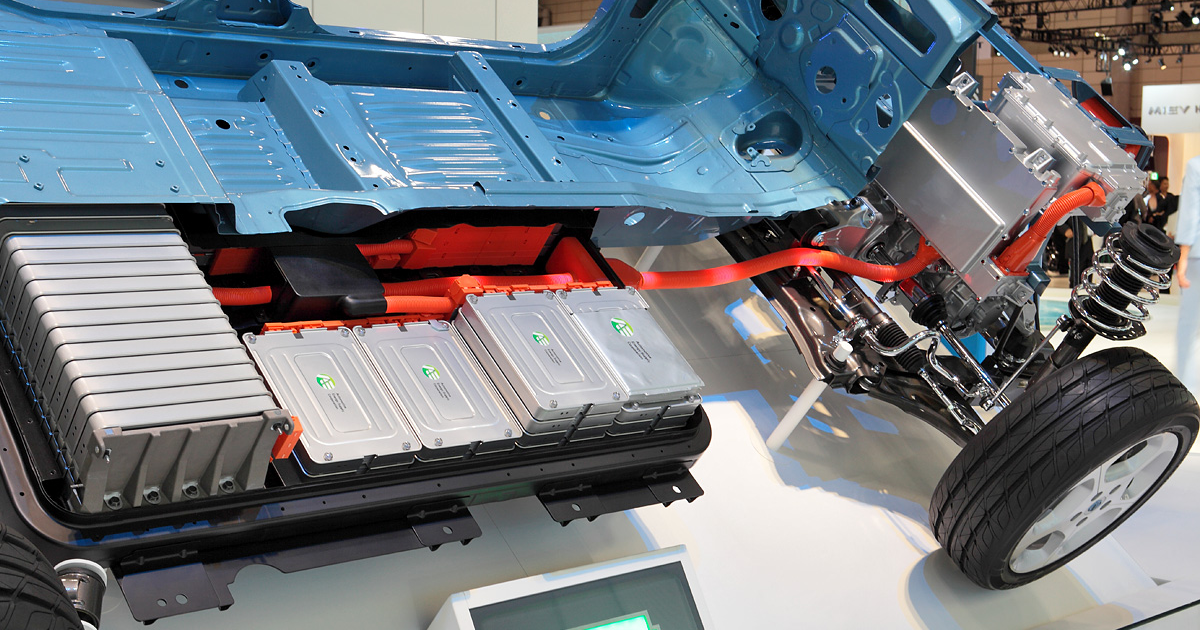 Are batteries ready to power the green future?

Image description: The lithium-ion battery pack inside a Nissan Leaf

When evaluating what technology has shaped the 21st century, the lithium-ion battery stands out. From our phones and laptops to mobility aids, it is difficult to picture our lives without this seemingly simple piece of electrochemistry. Their importance is highlighted when considering that batteries seem to be at the centre of a shift towards a low-carbon future. So it might come as a surprise that lithium-ion batteries should not be seen as a long-term solution.

After being developed by Stanley Whittingham, Akira Yoshino and John Goodenough (who was at that time the head of Inorganic Chemistry at Oxford!) in the 70s and 80s, winning the Nobel Prize for Chemistry in 2019 was long overdue. During the discharging process, positive lithium ions travel through the electrolyte from the graphite anode to the lithium oxide cathode. These materials are important as they allow the lithium ions to intercalate between their layers. There are currently many classes of oxide cathodes discovered by Goodenough’s group. Still, by far the most widely used is lithium cobalt oxide, as cobalt leads to a higher energy density and longer battery life. During the charging process, the reaction is reversed, allowing for 300-500 charge cycles before replacement. Many scientists are pushing for lithium-ion batteries used in electric vehicles, which are normally discarded at an early stage, to be recycled and used for different applications. This would pave the way for a more sustainable industry.

Since these batteries are very versatile and efficient, why do we need alternatives? There are many reasons, but one that stands out is using cobalt as the cathode material. With most of the cobalt production being in the Democratic Republic of Congo, relaxed labour laws have led to the exploitation of miners, including children as young as seven working under dangerous conditions. By 2030 the global demand for cobalt will rise to 235,000-430,000 tonnes, and for batteries increasing over four times within the same time. At our current rate, we could run out of cobalt within 65 years and this has caused prices to rise. Currently, most electric vehicle batteries have nickel-manganese-cobalt cathodes. Solid-state chemists are pushing to have nickel go from 60% of the total composition to 80%, with some researchers wanting to eliminate cobalt.

Lithium also has many issues. Extracting it involves an energy-intensive process known as ‘hard rock mining’, which releases 15 tonnes of CO2 for every tonne of lithium. If we instead use extraction from underground reservoirs, the water and land needed leads to issues for indigenous communities. The ‘triangle’ of Bolivia, Chile and Argentina, which contains half of the world’s lithium supply, is one of the driest regions on Earth. As hydrochloric acid is used in processing lithium, there is a risk for leaks into the water supply (alongside other waste products) which has led to many issues for farmers. Studies have shown that their impacts are found in local fish for up to 150 miles due to soil damage and air contamination.

Currently, most batteries end up in landfills, which has the added problem of electrolytes leaking and harming the local habitat.

To be more sustainable, many car manufacturers have turned to using lithium already in circulation, which would have to be paired with having better recycling processes. Currently, most batteries end up in landfills, which has the added problem of electrolytes leaking and harming the local habitat. Recycling batteries is made even more difficult as many battery manufacturers are unclear about the composition of their batteries, and due to the separation of metals by incineration wasting lithium.

Potassium batteries, with the metal’s high abundance and low extraction cost, are one alternative. There have been developments in ionic liquid electrolytes which would replace flammable organic electrolytes and allow for safer batteries. With cathodes being developed by a group at the University of Texas at Austin led by John Goodenough, they have a relatively high energy density. It is not certain that they will be as widespread as lithium batteries due to issues with potassium’s reactivity and because it melts at a lower temperature than lithium or sodium. However, they seem suitable for large-scale grid batteries due to their reduced costs compared to lithium. This would be vital when we move towards green energy sources, with the added benefit of charging faster than lithium batteries.

In June 2021, the Mayor of London, Sadiq Khan, launched England’s first-ever hydrogen double-decker buses as a push to reduce emissions in the capital. Hydrogen fuel cells are a greatly cost-effective and carbon-neutral alternative to lithium batteries. They work by passing hydrogen through the anode and oxygen through the cathode, with water and heat being the only products. The advantages of hydrogen fuel cells include a ten times greater energy-to-weight ratio when compared to lithium batteries, alongside having faster charging times, being lighter in vehicles, and, most importantly of all, being renewable and zero-emission. Nevertheless, hydrogen poses its issues, being very difficult to store and transport, producing emissions during production, and being extremely flammable – all leading to increased costs, as well as safety concerns. However, hydrogen fuel cells are still an attractive option for transport due to their high energy efficiency and reduced emissions, which is key when many cities are looking at ways to improve their air quality and shift away from fossil fuel engines.

There is no one perfect replacement for lithium-ion batteries, and chances are a variety of technologies are going to meet our demands. This problem is not going to be fixed overnight: research needs to be funded in developing new batteries that do not have the same issues as lithium ones. Manufacturing processes need to be pushed towards being more ethical and safer for workers. What I am not saying is to throw away your phone and wait for Apple to start using zero-cobalt batteries, but there should be better battery reuse and recycling programmes instead of letting them pile up in a landfill. With a projected growth of $100 billion by 2025, batteries are going to play an even more crucial role in our shift towards a greener planet but remain riddled with environmental red flags.