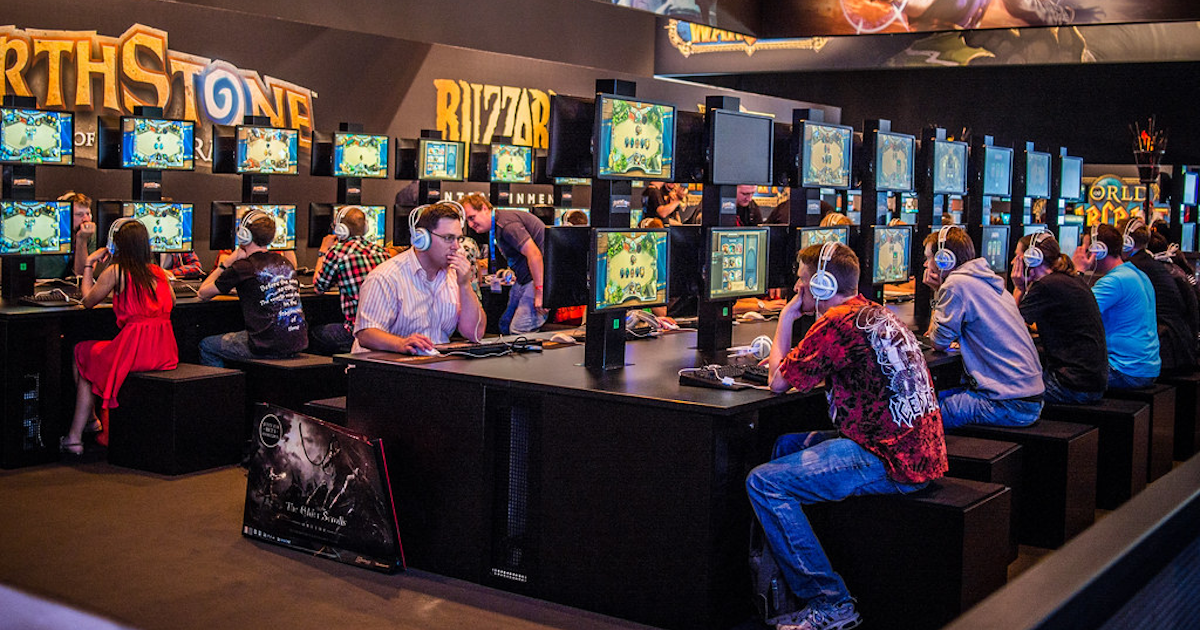 Image description: A convention of people all playing Hearthstone on PCs

Video games have the potential to produce the most varied and revolutionary experiences of all media. Through programming, one can create complex games that require a player to think in new and interesting ways that other media such as films and books cannot facilitate. In such a world of endless possibilities, however, many popular, large-studio games do not push the boat out too much, instead developing further tried and tested game structures such as RPGs and platformers. A case could be made to claim that this is simply down to bigger businesses wanting to minimise risk – there is certainly more innovation in terms of game structure by indie studios. However, I’d like to take a look at the phenomenon seen particularly in multiplayer PC games where the games seem to be more innovative because of, not despite, the limited tools at a certain developers’ disposal.

Video games have the potential to produce the most varied and revolutionary experiences of all media.

Early PC games that focussed on their single-player campaigns often had multiplayer support of quite a basic deathmatch system. They also allowed players to create their own multiplayer modes using the assets from the game. Two prominent games with such capabilities for modding were Half Life and Warcraft III. It seems the limitations imposed by having to create a game using only the assets and functions of an existing game encouraged creativity rather than restricted it.

These mods are often bought out or imitated by other companies when successful and thus thanks to the modding communities of these games we can be thankful for games such as League of Legends, Overwatch, CS:GO, and Dota 2. Other massively popular game genres have stemmed from other modding communities as well, such as battle royale games from Arma 2 and imposter games from Garry’s Mod. A perfect example of the impact and pervasiveness of games that started from mods is the recent rise of auto-battlers which I have followed from their inception.

Dota Auto Chess was a mod for Valve’s Dota 2 (the original DotA being a mod for Warcraft III) that rose to massive popularity in 2019. In the game, you create a team, bought using gold, during a shopping phase, before your team battles another players’ automatically in the fighting phase. The complexity and fun of the game come in managing your economy effectively: spend too much and your options are limited, spend too little and your team won’t be competitive; and also in finding new and interesting synergies and structures for your team.

The complexity and fun of the game come in managing your economy effectively.

The game provides a flashy, satisfying payoff in the fighting phase, which is lacking in most strategic economy management multiplayer games which often reduce to watching numbers tick up on a screen in slow turn-based gameplay. Like other games that come from the modding community, its popularity was soon capitalised upon, and adaptations of the mod were produced by Valve (Underworlds), Riot (Teamfight Tactics) and the original modding team Drodo with the support of Epic (Auto Chess).

The spread of auto-battlers has gone further than just adaptations of the game, however. The economy and team management elements have clearly sparked the imagination of many developers. Two fun examples are Luck be a Landlord and SNKRX, single-player games which take the gameplay of slot machines and snake and apply auto-battler concepts.

The economy and team management elements have clearly sparked the imagination of many developers.

Image credit: “Hearthstone at Gamescom 2013” by Sergey Galyonkin is licensed under CC BY-SA 2.0