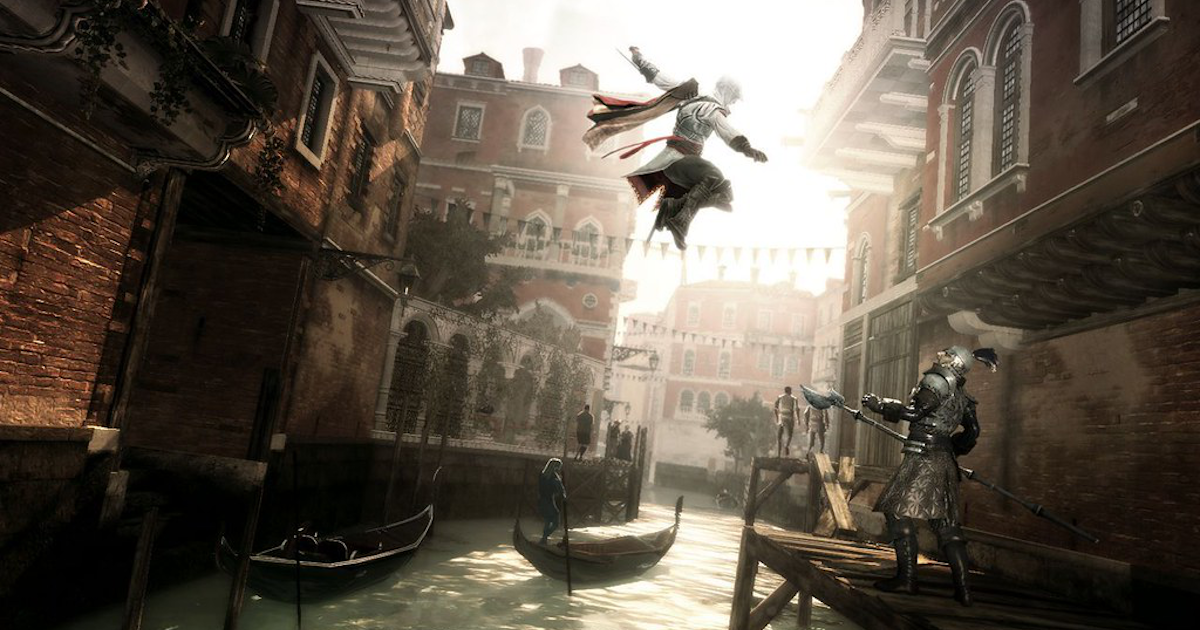 Assassin’s Creed and the problem with the ‘Ubisoft formula’

Picture this: it’s March 2021, I sit down in front of my TV, overly excited to have finally been able to acquire a PS5 (after being scammed out of money on my first try, don’t worry, I got it back), and I pop in the only disc I own, the one that came with the box: Assassin’s Creed: Valhalla. The Ubisoft logo appears in anticipation for what is sure going to be a next-gen experience. I begin the trials and tribulations of Eivor Varinsdottir, excited for more open world action, and… boredom sets in, I stop playing the game an hour in, and put OlliOlli 2 back on.

Some may just accuse me of an increasingly low attention span because all Gen Z are like that nowadays, some may say it’s just Valhalla specifically which loses grasp of its own ambitions and world, but, after a similar experience with many other similar types of open world, story-focused, action-based games, there is case to make that it’s not only a problem with Ubisoft, but a problem with the genre as a whole, and its commodification within the AAA market.

Boredom sets in, I stop playing the game an hour in, and put OlliOlli 2 back on.

Ever since Assassin’s Creed II in 2009, this type of open world sandbox, which finds itself more influenced by such previous linear, story-based games as the Prince of Persia series or the early Tomb Raider games than the RPGs of old, has solidified itself as the dominant genre within the AAA world. As soon as Ubisoft translated its formula for Assassin’s Creed over to Far Cry 3 in 2012, the floodgates were pushed all the way open, leading to a domination within the industry for this style, spreading to Batman: Arkham, Middle-Earth, Horizon, with even elements of it being found in previous RPGs such as the Fallout series.

We all know what this style I’m talking about entails, it’s the ‘Ubisoft formula’. A giant sandbox world, that usually opens up gradually throughout the game, towers to climb/puzzles to solve in order to reveal the following on the map: camps to take down, many many many various different types of collectibles to search for, and the barest minimum of side missions, with all of this vaguely propelled by a main story that usually involves taking down whoever controls this region.

We all know what this style I’m talking about entails, it’s the ‘Ubisoft formula’.

It may be surprising nowadays, in a time when the announcement of a Far Cry 6 barely amounts to more than a shrug, but there is a reason this formula has become as prevalent as it is. The extreme number of collectibles provides longevity and vast endgame content, whilst also satiating completionists, the towers and camps and sidequests mean that it is easy to create a seemingly living, breathing world, without having to actually write or animate any genuine deep RPG-style side quest.

The problem with this however, is already evident: it’s accessibility unfortunately also causes its monotony and potential for commodification. As this style became more and more prevalent, from Tom Clancy to Mad Max, the desire to continue playing the same game over and over again lessened. Combine that with a push by studios to create bigger worlds, with longer stories, and more ‘immersive’ games, and you get a style and system which is no longer appealing within the current gaming world.

A style and system which is no longer appealing within the current gaming world.

After the success of such multi-layered RPGs as The Witcher 3, AAA gaming took the wrong lesson from it. Rather than thinking it had to just more in-depth characterisation and storylines, the words ‘bigger’ and ‘more bloated’ simply flashed up in the minds of devs, leading to, as aforementioned, the likes of Assassin’s Creed: Valhalla, which attempts to both maintain this Ubisoft-style, whilst attempting to build a world with equal breadth as The Witcher, ending up just being a boring slog through monotonous side content.

Valhalla is only the peak of this downward trend, however, and it can be seen throughout the industry. Watch Dogs Legion, whilst innovative with its computer-generated protagonists, is brought down by its similar commitment to this formula; Ghosts of Tsushima attempts uniqueness with its call-backs to samurai cinema but is once again handicapped by its commitment to being a giant open world; even Horizon: Zero Dawn, a game that was critically acclaimed, I find can fall into collectible monotony and a world that’s too big for itself.

Valhalla is only the peak of this downward trend, however, and it can be seen throughout the industry.

The solution it seems, is for AAA devs to stop attempting dream of producing a deep and complex RPG that contains no RPG elements, relying on an engine that was built for an action-adventure franchise. Some good news I feel, is that my feelings about this have seemed to have caught on in other circles. More and more I see the the most noteworthy and acclaimed AAA games recently being more of the linear variety, from Sony’s excellent run of story-based exclusives in The Last of Us, or God of War, to the newly successful and engaging Soulsborne genre of games, to even smaller and much more interesting games like Deathloop. The general perception about these games is starting to shift, and people are becoming to notice their easy commodification into product. Is the industry finally taking notice? I certainly hope so.