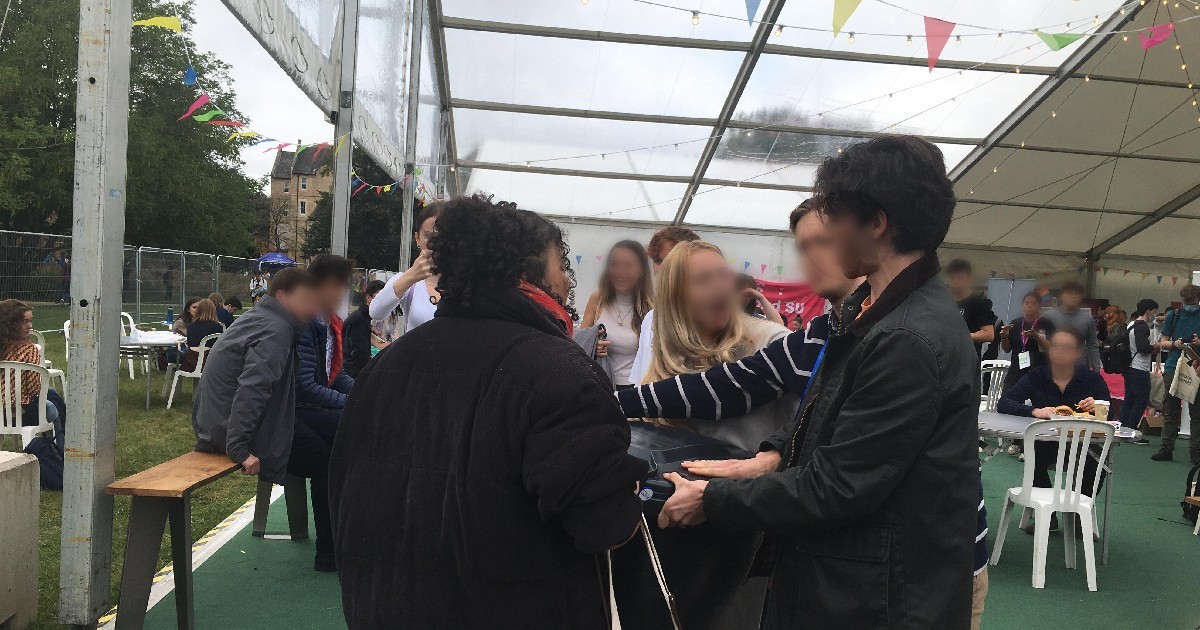 Image Description: a group of students tussling over a black bin, which contained the contents of the OSFL stall.

A group of students have in the past hour removed the Oxford Students For Life stall from this year’s Freshers’ Fair.

The contents of the stall were placed in a black bin which was then dragged outside, before the protestors were loudly and aggressively stopped by security. They refused to leave until they were assured that the stall would not be reinstated, and claimed that if the stall was put back up, it would simply be taken down again by another group of students.

This comes after the presence of the anti-abortion society at the freshers’ fair was criticised by other students and student societies, including the Oxford Feminist Society.

Oxford Students For Life is a society that describes itself as a “non-sectarian, student-run society… [that] seeks to promote a culture of life at the University and in the wider community, advocating the protection of human life and dignity from conception to natural death”. The group has preciously attended anti-abortion rallies, and pictures from a recent event in Parliament Square include placards reading “This is what a pro-life feminist looks like”, and “Life from conception: no exception”.

OSFL had shared pictures of its stall at the freshers fair on Wednesday, and drew criticism online for their presence at the event. One Twitter user wanted to reassure freshers that the society represented a minority of students.

The Oxford Feminist Society also published a statement, criticising the involvement of an organisation that represents a “threat to the safety, health and autonomy of women”.

“Oxford Feminist Society takes a firm stance against the pro-life organisation being promoted at the SU’s Fresher’s Fair. The stalls’ ideology is a threat to the safety, health and autonomy of women*. The reproductive policy of the SU to ‘support the right to choose’ and to ‘campaign and extend students rights of practical access to an abortion and extend rights of choice over pregnancy’ are undermined by having an anti-abortion stall.”

The SU’s Women* Campaign, or Wom*cam, also gave a statement, assuring students that they would continue to advocate for students’ reproductive rights, and urged OSFL to consider the impact of the messages they were sharing.

“In response to the presence of Oxford Students For Life at Freshers’ Fair, we at Women*’s Campaign would like to restate our commitment to ensuring all students at Oxford are educated as to their choices and the control they have over their reproductive health.”

“We firmly believe that abortion is a human right, and we are concerned that a student society whose ideology revolves around the removal of reproductive freedoms was allowed to promote such views at an SU event. We understand the importance of free speech, but we also think that the resources they were distributing had real potential to trigger students who may have had to deal, or are currently dealing with, decisions to do with reproduction and pregnancy.”

“Wom*Cam stands in solidarity with all women and people assigned female at birth who have had abortions for any reason, and we urge Oxford Students For Life to consider the impact their message and resources could potentially have on the wider student community.”

This comes as a petition has garnered over 7,400 signatures after a pro-life society was established at the University of Exeter.

The President of OSFL defended the group’s presence at the event, arguing that discussion around abortion was not only worthwhile, but necessary.

“Like most student societies of the University, we use the Freshers’ Fair to promote our mission and events. We are a secular, non-sectarian society, seeking to promote the culture of life at the University and beyond, by fostering discussion and education on beginning and end of life ethical issues, from a pro-life perspective. As someone who describes herself as a pro-life feminist, I believe promoting discussion and serious reflection on issues like abortion which affect women so profoundly is not only deeply worthwhile, but necessary.”

“Many students from all sides of the abortion debate have engaged positively with our stall over the Fair, and we’ve had a huge amount of compassionate and respectful conversations about these ethical issues. We are disappointed that a small group of students decided to take direct action against our stall, and are grateful to those working at the fair who have worked to protect our right to maintain our presence there.”

“Oxford SU has a current and live policy on supporting reproductive justice which was voted in by Student Council. This represents the views of Oxford SU on reproductive rights, as well as that of the student body. Oxford SU is unequivocally pro-choice and supports all people’s right to make their own decisions regarding their bodies.

We believe that no one should have to see their fundamental rights being up for debate, and for that, we apologise. We understand, and to some extent anticipated, the emotive responses and frustrations towards the presence of an anti-abortion stall at the Freshers’ Fair. The stalls present represent only their own views, and not necessarily those of the SU, and the Students’ Union has no say over the creation and existence of student societies. Societies are registered and approved by the Proctor’s Office and we are not a part of this process.

Oxford SU also has to adhere to the University Freedom of Speech regulations which we are mandated to follow. This is especially the case for events hosted on University-owned sites, like University Parks. We hope this goes some way to explain the presence of this stall at this year’s fair, as well as every year before. However, Oxford SU has to stand with and for its students. As an organisation, we want to learn from this to ensure that this policy does not overshadow our commitment to student mandates and welfare. We understand student concerns and have linked our complaints and scrutiny procedures below, alongside other resources students might find useful.

We would also encourage any students who are concerned with the University’s and Government’s stance on freedom of speech to get in touch with either Oxford SU or the University directly.”

The SU also provided a list of resources for students worried about the issues raised by the incident. Students seeking support should visit:

This article was updated at 15:18pm