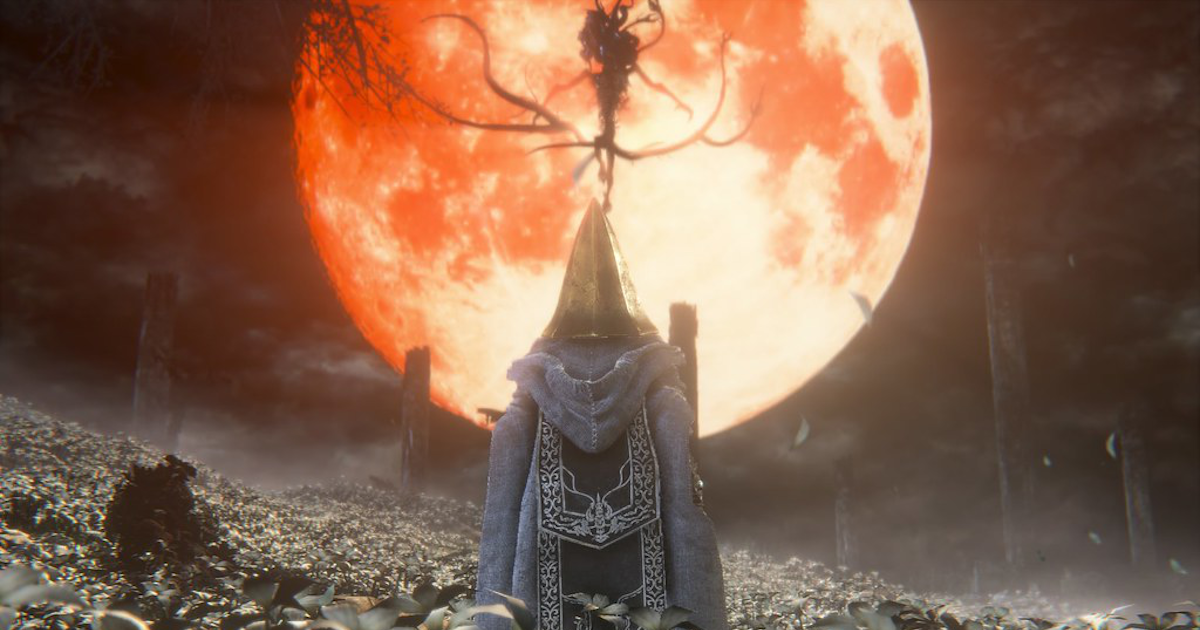 ‘Bloodborne’ and the art of adapting Lovecraft

Image description: the protagonist of ‘Bloodborne’ falls to their knees in witness of a Lovecraftian nightmare

The question of video games as art is one that, as someone who somewhat stopped playing games regularly once I left my teen years, I often struggle to reconcile with my other pretentious English Lit student leanings, and my friendship group of all very much non-video game playing hipsters (sorry, me included). Most of my knowledge of the current culture and discourse surrounding them really comes from my strange obsession with internet rabbit holes and reading articles that have nothing to do with anything I’ve ever done, of which I then memorise the details to such an extent you would think I was studying them for my degree. There is one exception, however, that stops me from turning in my hypothetical grave at the thought I actually enjoy playing video games, and that is my absolute adoration of From Software and Hidetaka Miyazaki’s seminal work, and by far the best thing Sony have ever got their hands on, Bloodborne.

This first paragraph was mostly tongue-in-cheek of course: as much as my pretentious attempting-to-be-cool hipster brain doesn’t want to admit, I do have an affinity towards video games. I wouldn’t be writing for the Gaming section of my university newspaper if I didn’t! But one thing from that opening that is very much true is that Bloodborne is still by far the most artistically creative, emotionally and intellectually impactful, and just generally most immersive game I have ever played. It can be argued, therefore, that this is entirely to do with how perfectly it ‘adapts’ the work and themes of H.P. Lovecraft, in every aspect of its presentation, from gameplay, to progression, to world, to atmosphere, to score, to story, to even the menu screens.

Bloodborne is still by far the most artistically creative, emotionally and intellectually impactful, and just generally most immersive game I have ever played.

If you haven’t played the game, and have only seen vague promo shots and trailers, you may be thinking: “H.P. Lovecraft? Intellectually impactful?? Menu screens???”, but this is exactly what makes it so perfect. Using the exact same ambiguous and non-user-friendly structure as Dark Souls, in which Miyazaki simply thrusts you into the lavishly realised world with only annoyingly obtuse NPCs and ominous one sentence phrases to guide you, Bloodborne initially seems to be, and has been accused to be, ‘Gothic Dark Souls without shields’. However, whilst in Dark Souls this serves to immediately introduce the barebones brutality of the medieval-styled world of Lordran, in Bloodborne this style is used to induce something even more interesting.

Whilst the game starts off, and was advertised as, an almost-cliché rendition of the Bram Stoker style of gothic and monster horror, complete with spiky Victorian spires, church bells, low sunset skies, evil pitchfork-wielding villagers and big scary werewolves, this sense of the cosmic and unknown has already started to burrow deep within the player’s brain through the game’s very deliberate mechanics. I’ve heard many people cry out about the game’s difficulty: “wow…Bloodborne huh? oof!” they say when I tell them it’s my favourite game, but the reason for this is difficulty is inherent to its very nature.

The game wants you to feel tiny and small, helpless and scared, as you wander about the streets of Yarnham, not sure what will pounce round the corner from one moment to the next, ready to end your proud streak of blood echo collection with a few swift blows. The sound design creaks and groans, strange noises being panned to the direct left and right of your speakers, tricking you into thinking some… thing may be lurking in the shadows and the smog. The levels duck and weave, turning in on themselves, leading you further and further away from safety, into the unknown, only giving you relief when you realise you have perfectly doubled back on yourself and are back in the safe grips of that faint purple glow of a lamp. The lack of shield, and the pitiful damage done by your mediocre weapon selection, only further add to this sense of it being you against the world.

The game wants you to feel tiny and small, helpless and scared, as you wander about the streets of Yarnham.

You are alone and outmatched, and you must make your way through without guidance, leaning only on your skill and wit to survive. I mentioned earlier about the menu screens, because I cannot be the only one who already feels a delicious sense of dread from that haunting music and simple command to ‘Continue’. Literally the very first thing that most players will do, something which is deliberately scripted in the game, is for you to be killed in the first room you step in. There is no greater evidence from the very first moments what the intent of the designers is in this world they have created.

This means that when the game finally reveals itself to be the true Lovecraftian story it is, after hours of miraculously slaying bosses, being confused by how you’re meant to be progressing, and being sucked into this rich and horrifically beautiful world, it doesn’t feel jarring. The newfound world of mindsucking monsters, Cthulhu-like aliens, literal nightmare worlds, beings of ambiguous mass being summoned through clouds of blood ends up not feeling so out of place after hours of the game forcing this feeling of cosmic.

I have focused in this article on the gameplay, and that is because I wanted to focus on the aspect of the game that is not so obviously Lovecraftian, but perhaps is even more important in its adaptation of it. The rest of the game, the story, the names, the subtle art design, already does a lot of the heavy lifting work, but it’s the gameplay that solidifies Bloodborne as the perfect depiction of cosmic horror in any medium. Through such tentacled, horrific bosses as ‘Ebriatas, Daughter of the Cosmos’ and ‘The One Reborn’, and such mechanics as the collection of ‘insight’ (in which it turns out that the more one collects, the more the cosmic world reveals itself), the thing that stuck with me most within the idea of cosmic horror’s inherent existential dread, was the dread I felt by simply playing the game.

The thing that stuck with me most within the idea of cosmic horror’s inherent existential dread, was the dread I felt by simply playing the game

Whilst the gothic is often a visual aesthetic, Lovecraftian and cosmic horror is a feeling, and there is no more pertinent medium that utilises feeling in such a necessary way than video games. What most adaptations of his work, in either plot or imagery, fail to recognise, is that the presence of some tentacle monster is not enough to make it reminiscent of the work. It’s the feeling of hopelessness and helplessness, brought about by a sudden understanding of one’s place within the universe and the greater, more unknown and terrifying forces therein, that defines the horror of Lovecraft, and I’ve never seen a greater piece of art than Bloodborne that has so wholly and perfectly adapted, distilled and evoked my favourite brand of horror, and I don’t think I will ever again.