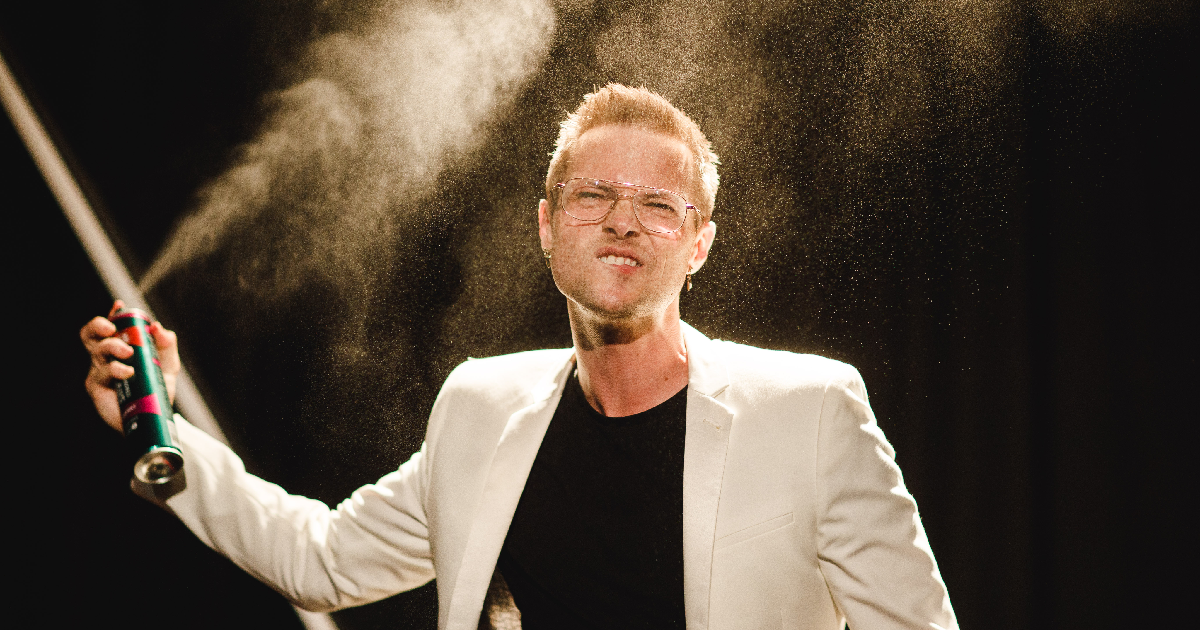 Image Description: Nathaniel Hall spraying an aerosol can in front of him and smirking.

Starring in Russell T Davies’ channel 4 series, Its a Sin, Nathaniel Hall is a director, actor, and storyteller. He’s performing his play ‘First Time’ at the North Wall Gallery in Summertown on Tuesday 19th October. First Time is a raw, honest and funny play presenting Nathaniel’s experience of living with HIV.

From Stockport, Nathaniel has a northern charm that made me feel comfortable instantly. In his own words, Hall is ‘bold and brave and authentic’. You’d have to be, to pull off a piece of theatre that explores a very personal aspect of your life, attached to so much stigma. When describing his motivation to create the show he said ‘I often work with other artists to tell their real stories… I needed to take a dose of my own medicine’. Nathaniel explained to me that the show itself ‘was a way of forcing myself to tell my family.’ Diagnosed with HIV after his first time having sex at age 16, he was still not open about being HIV positive 18 years later.

When I asked Hall why he would choose to tell a story that was about a difficult time in his life so publically and in a way that has also been described as funny. He said that he ‘Never set out to make a piece of comedy theatre, it’s dark and it’s sincere. ‘ He explained that comedy can be a way to approach topics that people don’t normally talk about. ‘We’re not very good at talking about sex’ and that the added stigma of queerness and STI’s makes it even less likely. This is why comedic elements of the show are so important ‘Comedy helps the audience to feel comfortable and safe … even though I take you to vulnerable places. If there was a feeling that I was talking about things I hadn’t processed, it would be very uncomfortable’

‘I often work with other artists to tell their real stories… I needed to take a dose of my own medicine.’

Homophobia plays a large role in the stigma of HIV and AIDS, he said that ‘HIV is really deeply connected to gay men in the British Psyche.’ (despite the fact that it can be transmitted through heterosexual sex too). The added effect of Thatcher’s Section 28, (legislation that made it illegal to talk about anything to do with LGBTQ+ people in schools) had made it harder to educate people against common misconceptions about HIV and AIDS: ‘We’re still unpicking the effect that had’. He told me about a study that had polled the British public and found that less than a quarter of them knew that HIV positive people could have sex without transmitting it to their partner.

This is a fact that alleviates a lot of stress for Hall, who told me how having HIV affected him at a ‘Moment where I was coming to my sexuality, it had a painful impact on my relationship with sex’. This was only exacerbated by the uncertainty over transmission when he was diagnosed in 2003 – ‘the science wasn’t clear that I couldn’t pass it on’. He says ‘’infectious’ isn’t a word I like to use but that’s the way I felt’. With the medication he’s on he says the anxiety surrounding this has all gone. People who are particularly medically vulnerable can pre-emptively take medication before sex to be extra safe.

‘With medication, people live a long and happy life.’

Still, it’s not always been easy. ‘It’s been a long journey to get here, a lot of therapy – a lot of rejection as well- I’ve been called all sorts’ but Nathaniel is now ‘happy and healthy and thriving, I’ve done and achieved everything I wanted in my life, I just needed a bit more help. ‘It’s a Sin’ was an amazing opportunity I have wake up moments where I realise how lucky I am… if I had been born 20 years ago, I would be dead.’ Medication was introduced in 1996, 7 years before Hall became HIV positive, but he told me how some of the people who took early versions of the medication experienced long term side effects. Even now ‘38 million people are HIV positive around the world – access to the medication I take isn’t universal, 100,000s of people die every year’

Now Nathaniel uses his platform to be an activist and spread awareness about HIV- ‘If you’re having sex, gay sex, straight sex, having sex once or having lots of sex, it doesn’t matter, there’s still a risk’. He uses his platform to amplify stories from people living with the diagnosis in a series called HIV + Me. To young people who are HIV positive or thinking about getting tested he says: ‘It’s still a life-changing diagnosis, I understand the fear that people have of being tested… don’t do what I did, talk to people- find the people who are supportive around you’ and that ‘With medication, people live a long and happy life’.

You can buy tickets here to see the show on Tuesday- when I asked Nathaniel what we should expect, he said ‘Very funny theatre that entertains as well as educates… with all the stops pulled out to tell the story’.