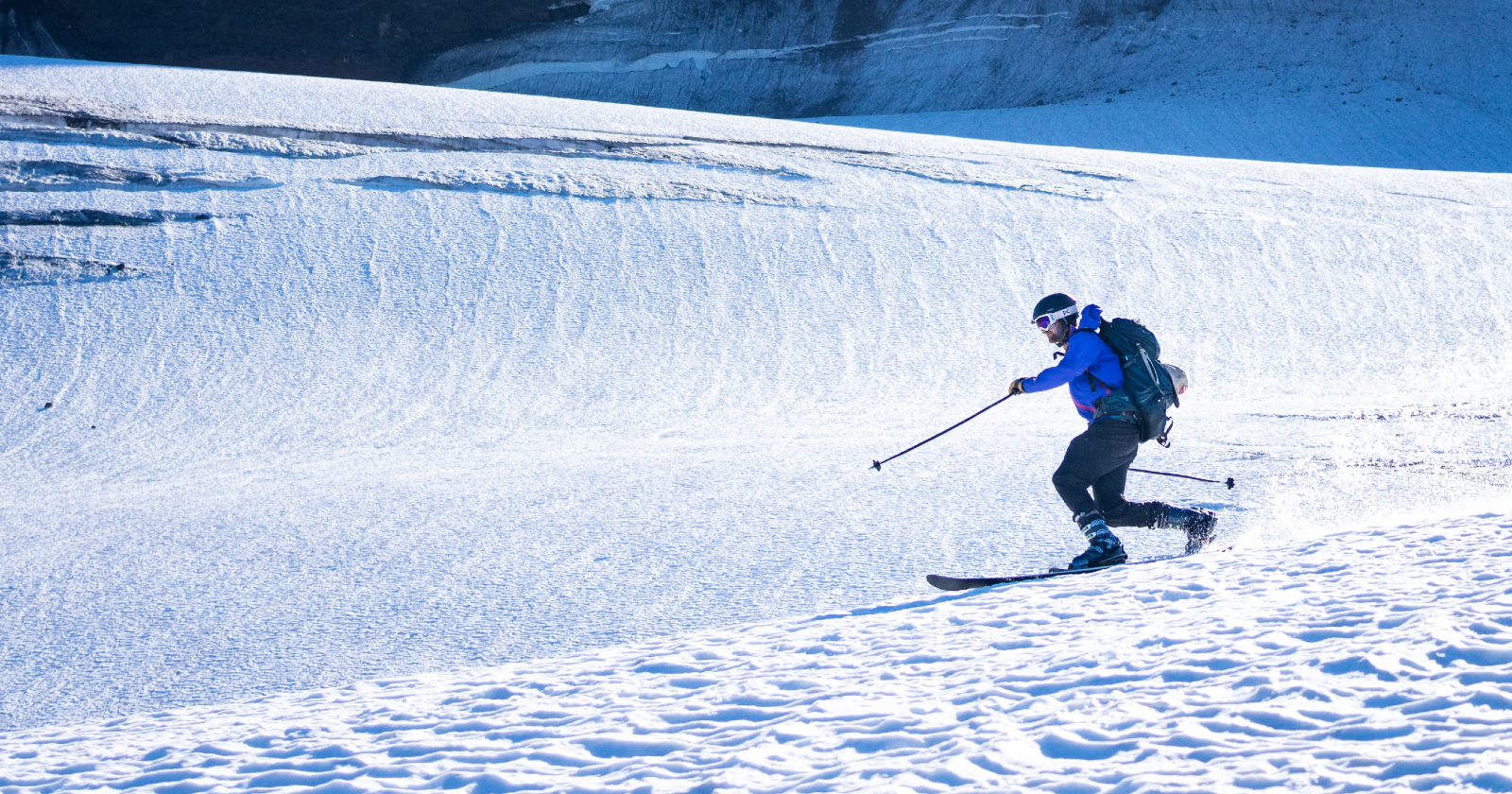 Telemarking, the type of skiing which needs more recognition

People often think that alpine skiing – the most popular type, where the whole foot is attached to the ski, and the two skis are parallel to one another – is descended from Nordic cross-country skiing. This is true, as cross-country skis have been used for thousands of years by the indigenous Sami people in Scandinavia; the light, narrow ski provided ideal transportation across the snowy plains long before there were roads or motorised vehicles. However, another branch of Nordic skiing developed around the same time as alpine skiing, and its versatility gave skiers freedom to inhabit the space between alpine and cross-country – a ‘best of both worlds’.

Named after the Telemark region of Norway, telemark skiing is a bit like cross-country skiing, in that the heel of the foot is not attached to the binding (or ski). Yet the modern versions of telemarking and alpine skiing were developed around the mid-1800s, when skiing was becoming more recreational, and both skis became wider than cross-country skis to provide more stability on the downhill slopes. The Norwegian Sondre Norheim pioneered the slalom style race, used in both alpine and telemark events today, and is considered to have been the first person to demonstrate the ‘telemark turn’ in a race. This telemark turn, where the downhill ski is positioned in front of the uphill ski, became the model for modern-day telemarking. The lead change required to keep the downhill ski at the front (in other words, leading round the turn), and the free heel are the most striking visual distinctions from alpine skiing. Telemarking therefore has a unique aesthetic, and many have called it the most graceful type of skiing. It even has its own cliché – ‘free the heel, free the mind!’

Telemarking is still popular in Norway, as well as the USA. A lot of military units, such as the Marines, undergo telemark training, especially as telemark skis lend themselves to backcountry ski touring. In this sense, the growing interest in ski touring for both military training and for recreational skiers looking for greener, ski-lift-free transportation, has spread knowledge about telemarking. Nonetheless, outside of touring, it is still considered a small movement; some may even argue that the discipline is simply an attempt to recapture some ancient, dying tradition. Yet, the growth of clubs like the Manchester Cross Country Ski Club, which has the largest civilian telemarking community in England, and the achievements of athletes such as Jasmine (Jaz) Taylor – who recently became the British skier with the most World Cup and World Championship medals – show that the telemark community is very much alive. In a quick interview, it was interesting to hear Jaz’s views on the place of telemark, the 2022 Olympic bid, and her own sporting background.

Hannah: Most people who start telemarking are already competent alpine skiers. What are the main differences between telemark and alpine skiing, both in terms of technique and components of fitness?

Jaz: In telemark we lunge, compared to a more squat-like position in alpine, where the body weight is more evenly distributed between both feet. Balance is challenged laterally, just as it is in alpine, but there is an additional challenge with fore-after balance as the free heel allows more movement. For the average recreational skier, most find telemark more physically demanding and it is maybe a bit harder work on the muscles, but the greater range of movement available in the equipment means less forces absorbed into the joints. So basically, it is more forgiving on joints but asks for more balance and muscle power…

H: How did you first get into telemark skiing?

J: I was an alpine ski racer on the dry ski slopes (at Suffolk as a young teenager), before getting spotted and invited to train out on snow with the British Ski Academy. It was here that we all tried telemark and I just loved it and couldn’t wait to go again. The guy instructing us on those first lessons is now Head Coach of the GB Telemark Ski Team; it has been quite the adventure.

H: Was it a difficult decision to move your racing and training focus away from alpine skiing to telemarking?

J: Not at all, I applied the same way of working and thinking to telemark but with a brand-new motivation and, with a new unknown path to figure out, it was a really exciting time in my life.

H: Do you still ski on alpine gear sometimes?

J: Yes, I am a ski instructor and am working my way through my BASI [British Association of Snowsport Instructors qualifications] and work in the ESF [Ecole de Ski Français] in Les Houches where I am based for the winter season. I also ski alpine for fun when I have time and feel like it. I am much better now than I ever was; telemark, along with all the physical preparation I do, has transformed my alpine skiing.

H: Why do you think telemarking is not more popular or well-known, or skied by more people?

J: There are too many barriers! It is difficult to find kit, to learn the technique at first, to find others to telemark with. I could go on, but I think these are some of the main reasons.

H: What can be done to get more people telemarking?

J: I would say, break down those barriers; have kit available, resorts advertising their instructors, promoting the sport in a positive light.

H: You have been active in trying to make telemarking an Olympic sport, although the proposal to include it at Beijing 2022 was voted down by the International Olympic Committee. What do you think the next phase should be in pushing for telemark’s inclusion into future Olympics?

J: This was the furthest point telemark has reached as a sport in regard to Olympic inclusion which is a huge achievement in itself. In the racing world, we need more resources, which could include sponsors, athletes of all levels, races of all levels held in resorts all around the world.

Overall, telemarking is the most versatile style of skiing, suitable for many different purposes and terrains: touring, doing the telemark turn on resort slopes, and even skiing with the legs parallel like alpine skiing. Perhaps, if telemarking is given even more media attention, the community will continue to grow and flourish as more people are introduced to this beautiful and rhythmic style.