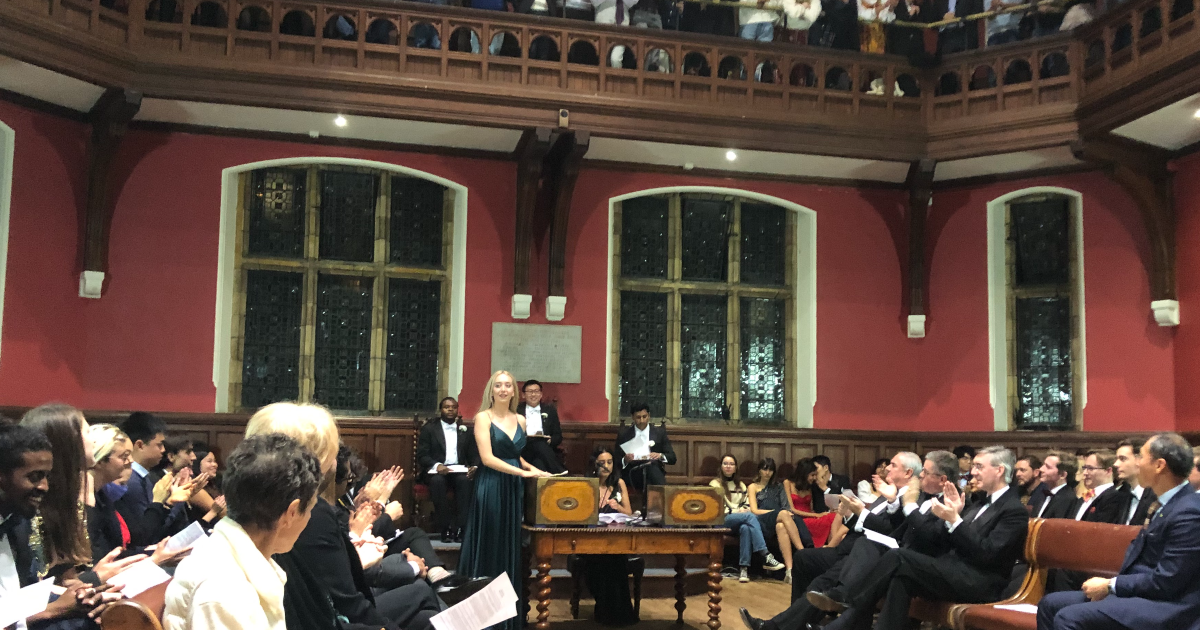 Union votes no confidence in the Government

Image description: The Union chamber at the start of the debate

The Oxford Union passed a motion of no confidence in Her Majesty’s Government on Thursday night by a resounding majority of 228 to 95.

The vote is a stinging rebuke to Boris Johnson, a former president of the Union. The ‘no confidence’ debate is held annually at the start of the academic year and has been lost by the Government for the past several years.

Defending the government were the Rt Hon Sir Geoffrey Cox QC MP, a former Attorney General; the Rt Hon Robert Buckland QC MP, a former Lord Chancellor and Justice Secretary; and the Rt Hon Jacob Rees-Mogg MP, the Leader of the House of Commons. Earlier in the day, Mr Rees-Mogg had addressed MPP students at Oxford’s Blavatnik School of Government.

The evening’s event was the Union’s first major in-person debate since the COVID-19 pandemic. The chamber was packed, with reports of up to 200 people being turned away, and there was some booing as the Government speakers entered.

Amber Warner-Warr, Chair of the Union’s Consultative Committee, opened the debate. She argued that Boris Johnson’s administration governed based on rhetoric and empty promises. “It is easy to have faith in populism until we don’t see any real change,” she said.

She attacked the Government’s failures over the recent petrol crisis and the “shameful” bungling of the withdrawal from Afghanistan, and said that the Government had either “passively ignored or actively betrayed” large sections of society.

“It is easy to have faith in populism until we don’t see any real change,”

Even Conservatives, she argued, should have no confidence in the Government because Johnson’s policies have led to “bigger government with higher taxes”.

Union Treasurer Arjun Bhardwaj then began the case for the defence with a polished and methodical exposition of the Government’s achievements.

“Regardless of which door you walk out tonight,” he said, “you only have the power to do that because of this Government’s vaccine success.”

When it came to Brexit, the Classics student remarked that “alea iacta est” (the die is cast) and highlighted the Government’s achievements in moving forward with striking new trade deals. He said that this “shows what Britain can achieve as a sovereign trading nation”.

Lastly, Mr Bhardwaj trumpeted the Government’s £36 billion investment in the NHS. He conceded that tax rises were “a necessary evil” to combat historic underfunding and the impact of the pandemic.

Branding Labour as “distracted and divided”, he asked: “How can Sir Keir Starmer lead the whole country if he cannot even lead his own party?”

Mr Thomas-Symonds began his rousing address by praising “how the British people came together” in the “dark time” of the pandemic. He said that Boris Johnson was not fit to “lick the boots” of key workers and castigated the ending of the £20 uplift in Universal Credit.

“I used to teach about soup kitchens as a part of history,” he said. “I never thought I would see food banks in my own lifetime.”

The Shadow Home Secretary attacked the Government on law and order, claiming that it was “soft on crime and soft on the causes of crime.” Referring to the newly-formed Department for Levelling Up, Housing and Communities, he joked that “they’ve started naming Government departments after policies they’re failing at.”

He called the Afghanistan debacle “the worst foreign policy crisis since Suez.” In contrast to past Labour governments, he said, this was an administration lacking both in “competence and compassion.”

Sir Geoffrey rose next to deliver a theatrical and humorous performance, filling the chamber with his booming voice.

“Any government worthy of approval must capture the spirit and the essence of their age,”

He praised Boris Johnson as an authentic and charismatic politician who “understands the seismic shift” of the political landscape after Brexit. “There is but one politician, and one Government today”, he said, which understands “the neglected swathes of millions” who voted to leave.

Sir Geoffrey lauded the Government for delivering “one of the world’s most successful vaccine programmes” and for their progress on the economy. By contrast, he attacked Labour as in the grip of “the serpentine coils of the hard left.” 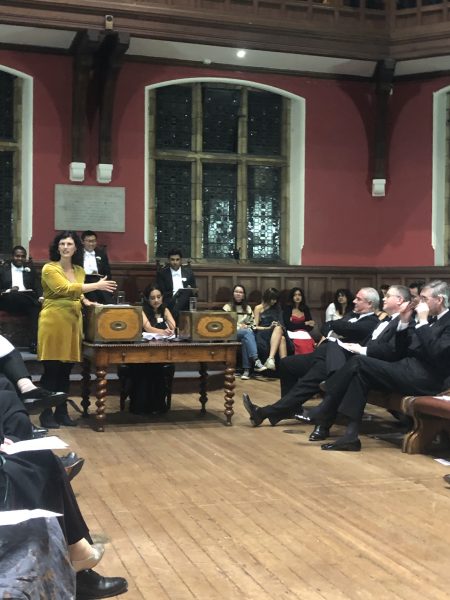 Ms Moran chose to focus her speech largely on the impact of Brexit. She called the Government’s handling of the Northern Ireland protocol an “utter embarrassment” and a betrayal of the “British values” of honesty and commitment. She asked: “Is [the Prime Minister] dim or just dangerous?”

She said that current supply shortages across the economy are “utterly pitiful” and passionately accused the Government of creating an environment “so xenophobic, so unwelcoming, that [EU workers] decided they would rather leave and not come back.”

Ms Moran, who represents Oxford West and Abingdon, emphasised the impact of Brexit on the local area through problems like staff shortages in the hospitality sector. She won applause with her claim that the success of the COVID-19 vaccine rollout was not due to the Government, but because of “scientists here in Oxford.”

Looking to the future, she warned that the Government’s “incompetence” meant that the pandemic was merely “a dress rehearsal for what comes next.”

Mr Buckland dismissed his opponents’ criticisms as “a string of complaints, whinges and moans.” Wagging his finger like a schoolteacher, he instructed his audience not to “buy the tired old rhetoric” of the left.

He told the chamber how he had joined the Conservative Party during the miners’ strike 35 years ago because he opposed the idea of “unaccountable power challenging democracy.” He said that he remained “deeply proud” to support a Government committed to the “rejuvenation of society.”

Addressing the welfare cuts, he said that “Universal Credit delivered for millions of people during Covid” and that Labour was originally opposed to the benefit. Calling coronavirus the country’s “biggest challenge in peacetime”, Mr Buckland said that the Government had invested £400 billion into the economy and saved 14 million jobs.

The floor was then opened up for four student speeches, including one from former Union presidential candidate Amy Gregg.

Mr Streeting compellingly concluded the case for the proposition, homing in on the Government’s mismanagement of the pandemic and Brexit. He slammed the Government for cutting Universal Credit and abolishing the Department for International Development. “That’s not levelling up, it’s punching down,” he contended.

He won the loudest applause of the night when he declared that the offensive comments which Mr Johnson has made about minorities in his newspaper columns are “below the dignity of the office of Prime Minister.” 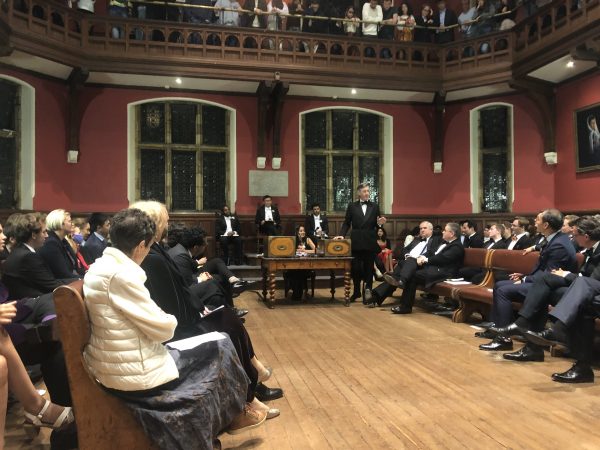 Mr Rees-Mogg delivered a hotly-anticipated closing speech, rebutting what he called Labour’s “bunkum, balderdash, blithering bottiness.” He said that the proposition were foolish to believe that life before the current Government was a “Garden of Eden”.

He cautioned that increases in public spending would have to come from “hard pressed taxpayers”, to which a heckler shouted that “it should come from you.” Mr Rees-Mogg attacked Labour’s internal divisions and praised Boris Johnson for his calm handling of the pandemic, adding that Britain could not have solved the Afghanistan crisis on its own.

Mr Thomas-Symonds then loudly heckled when Mr Rees-Mogg accused Labour of being soft on crime, and the two traded barbs on which party had done more for law and order.

When the House finally divided, the result was decisive. The Conservatives had made the more stylish speeches, but it was Labour and the Liberal Democrats whose arguments had won the day.