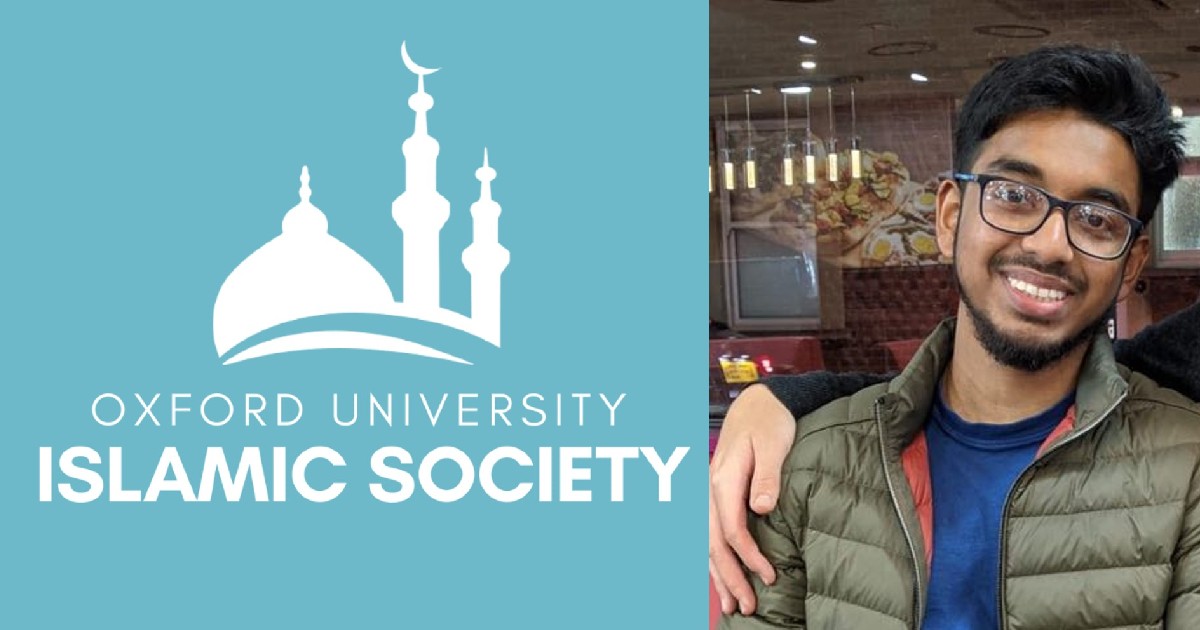 Image Description: the President of ISoc, and the logo on a blue background.

What is the Oxford University Islamic Society?

The Oxford University Islamic Society (ISoc) is a student-led society that caters to the needs of Muslim students studying at the university and provides a community whilst we’re away from our families and in the unfamiliar waters of Oxford. The ISoc is one of the largest and most active student-societies at Oxford, with a very active termcard and events ranging from talks and lectures to socials and even community wide initiatives. To use the cliché phrase, it provides a home away from home –  it provides a Muslim community away from home.

How did you get involved with the ISoc?

I was introduced to the ISoc in freshers’ week, attending the events that were going on. The first event I attended was the freshers’ quiz night at St Hilda’s, where I learned that there was a sizeable Muslim community here at Oxford. As most ISoc events tend to have, there was free pizza at hand which definitely helped me settle in! At this social, I felt a sense of ease and familiarity that I hadn’t found anywhere else up until that point. I found myself being drawn to the people at ISoc and the events put on and constantly wanting to feel part of this society.

What’s your favourite thing about OUISoc?

My favourite thing about the ISoc is the opportunity it’s given me to meet such a diverse range of people and to benefit personally and spiritually from all of them. If you ask people from ISoc to sum up the society in one word, most will say ‘community’ and that’s exactly how I’d describe the ISoc. The community that I’m a part of here really does make you feel at home and it’s as though whatever college you go to, you’ll find someone to give you a warm embrace and make you feel welcome.

Is your job a lot of work? How do you balance it with academic work?

To be completely honest, it is very time consuming but it’s also very rewarding and enriching. Interacting with the committee and the wider community is extremely refreshing and I’ve had the chance to meet lots of new people that have benefited me in more ways than I can comprehend. Balancing my academic work requires a lot of discipline! You have to be wary of how much time you’re spending socialising as that could be eating into precious study time. What I’ve found is that when you’re given a responsibility that affects other people, your sincerity to do it well increases tenfold and you naturally give it the time and effort it is due.

What’s the best way for people to be allies in the fight against Islamophobia at Oxford?

I think the biggest reason people may have contentions about Islam is due to a gross misunderstanding of it’s teachings. Often certain topics, such as women in Islam, are misrepresented and as a result, this incorrect notion is perpetuated and we as Muslims aren’t given a chance to demonstrate what the religion actually teaches. Learning about Islam from people who are sincere and trustworthy is an extremely useful way to educate yourself about Islam. Any Muslim friends that you have would be a great place to start! It’s when you can learn what Islam really teaches that you’re able to understand and sympathise with why certain things may be Islamophobic, and spot it when it does occur.

What’s one thing that you want people to know about the ISoc that lots of people don’t know?

There’s probably someone at your college or even friendship circle who’s very involved with ISoc, reach out to them and speak to them about ISoc! We put on a lot of events all year round and all our events are open to anyone. In fact, we often host events tailored around allowing non-Muslims to learn about the faith and meet Muslims over some free food. During Hilary, we have a flagship campaign titled ‘Discover Islam Week’ aimed at introducing Islam to non-Muslims, so do have a look out for that. We also have a dedicated prayer room in the Robert Hooke Building which hosts a lot of events and we’d love to have you over for some of them!

What do you have coming up?

The Islamic Society always has a packed term card full of loads of events that everyone can get involved in!

We will be running our Charity Week campaign in week 3 including our annual Snowdon hike with Cambridge ISoc. This is definitely an event to look forward to as we weren’t able to run it last year! We also have the Oxford Muslim Research Conference coming up featuring Sheikh Yasir Qadhi as a keynote speaker, and a career’s week later in term with a variety of events on different sectors delivered by former students.

We have a series on Women in Islam coming up, a “Come Dine with ISoc” hosted in our prayer room and plenty of other events! We are really excited to be able to return to in-person events again and so are extremely looking forward to this term.