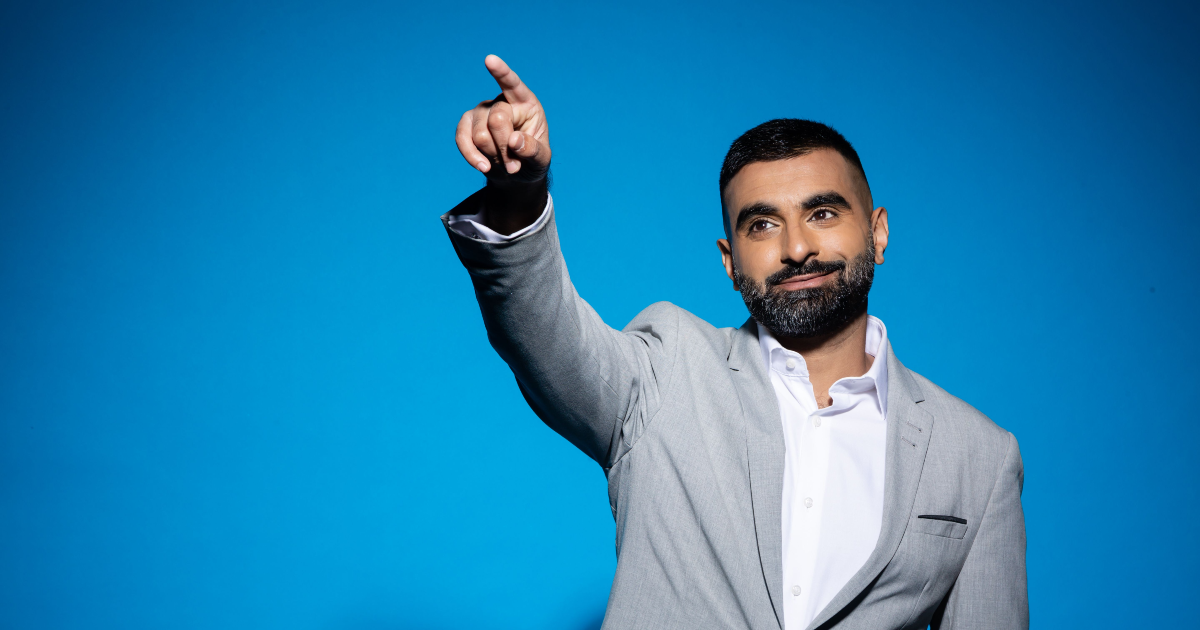 Tez Ilyas is a British Pakistani comic from Blackburn. He’s known internationally for his stand up, appearances on panel shows such as Mock the Week and the Last Leg, his Tez O’Clock show and most recently for his debut novel- The Secret Diary of a British Muslim aged 13 ¾.

OxStu and Danial Hussain – Vice President of Oxford Pakistan Society, had the chance to interview Tez ahead of his new tour Vicked. Although we interviewed him over Zoom, Tez’s personality jumps out at you immediately. He has a confidence that makes you feel at ease. He joined us from his car, explaining that he had his phone balanced on his car steering wheel so that he could move his hands while he was talking to us. Even when he’s not on stage, Tez is always performing.

During our introductions, Danial told Tez how much he enjoyed his work. He remembered watching Tez in the show Man like Mobeen before he came to Oxford.  He said it was a space where he felt that British Pakistani culture is represented and celebrated.

We went on to discuss being a British Pakistani within the comedy and wider entertainment industry and whether that representation that Danial had enjoyed watching in Man like Mobeen was becoming more commonplace. Tez mused: ‘It’s definitely getting better, I started doing comedy 11 years ago in 2012.’ He described Riz Ahmed as a pioneer, leading the way for the recognition of British Pakistani culture in entertainment, winning Best Actor and Best British Film BAFTAs this year. He said; ‘I think these steps are being taken and talent is being recognised’ but with the caveat that: `There’s been positive change but it’s not perfect… Hopefully in the next generation with you guys, things will be better’.

His main words of advice for someone who wants to break into comedy were: ‘Be resilient- resilience is a massive thing- and persevere’.

‘It’s hard for everyone, even if you’re a white middle class privately educated white guy. It might be easier but it’s still not easy. There are barriers that are huge that may not be to do with your background. The most important thing is that you have to want to be in it…Take the rough with the smooth and be prepared for rejection.’

‘Be resilient- resilience is a massive thing- and persevere’

Somewhat counter-intuitively, when Danial asked Tez what made him really want to be a comedian as a young man he replied: ‘I don’t think I did bro. I started at 27, had zero background in the arts, dropped drama at GCSE… I didn’t grow up with an ambition to be a stand-up comedian, I actually wanted to be a doctor when I was a kid’. Tez got into comedy later when he moved to London and tried to find a creative writing course as a hobby while working as a civil servant. He ended up on an open mic course instead, and the rest is history. What is clear is that he adores being a performer and making people laugh.

He says he ‘truly love(s) it- a lot of the time it doesn’t feel like a job.’ Standup in particular is a passion for him. ‘Standup is my wife, everything else, acting or whatever, is my mistress. The feedback is in real-time and you’re so vulnerable – I love the feeling when you make a room full of people laugh…I feel blessed’.

Tez’s comedy often features debunking of misconceptions about British Pakistanis and Islam more broadly. He deals with these topics and challenges popular perception but does so in a way that avoids preaching and keeps the audience laughing. He never tells us what we should think, he just presents the facts alongside funny but striking anecdotes about his own life and lets us come to our own conclusions. In Teztify (available on youtube) he tells a story about his third-generation niece coming home from school and thinking Punjabi is a racist impression of a South Asian accent. You laugh at his story – lost in it –  then think about how wrong it is, and that sticks with you. Tez’s comedy is always raw, provocative, but most of all, funny

We asked him whether the educational aspect of his comedy was a part that was intentional and something he wanted to portray in his shows. ‘I want to say no – I create things that make me laugh and I find interesting – if the audience gains any value beyond entertainment then that’s great.’

‘More and more I leave some of the stuff in the subtext,’ describing this as a skill he’s worked on and honed throughout his career. He says there’s a danger of social commentary in comedy being ‘too in your face and then some people switch off’.

Tez then went on to discuss how overt social commentary is overused or perhaps misused in comedy. ‘If I go up on stage and talk about how much the government has messed up the pandemic, it’s a cheap way of getting a round of applause… but preaching to the converted isn’t very funny’.

‘I’m more of the American School. Even if I don’t believe in it, say something cheeky and provocative that makes me laugh.’ He says he would rather watch Dave Chapelle than someone who he agrees with more politically. Tez takes inspiration in this respect from Chappelle and Norm Macdonald – quoting the late comedian: ‘Comedy should surprise not pander’.

So we asked Tez what we can expect from his new show Vicked which is coming to Oxford on the 27th of October (you can buy tickets here). He summed it up like this: ‘Laughs and cheeky provocations’. Tez’s closing words for you, Oxford: ‘Come and have a good laugh- we’ve been through this crazy time, 18 months of madness – I just want people to have a really lovely time.’