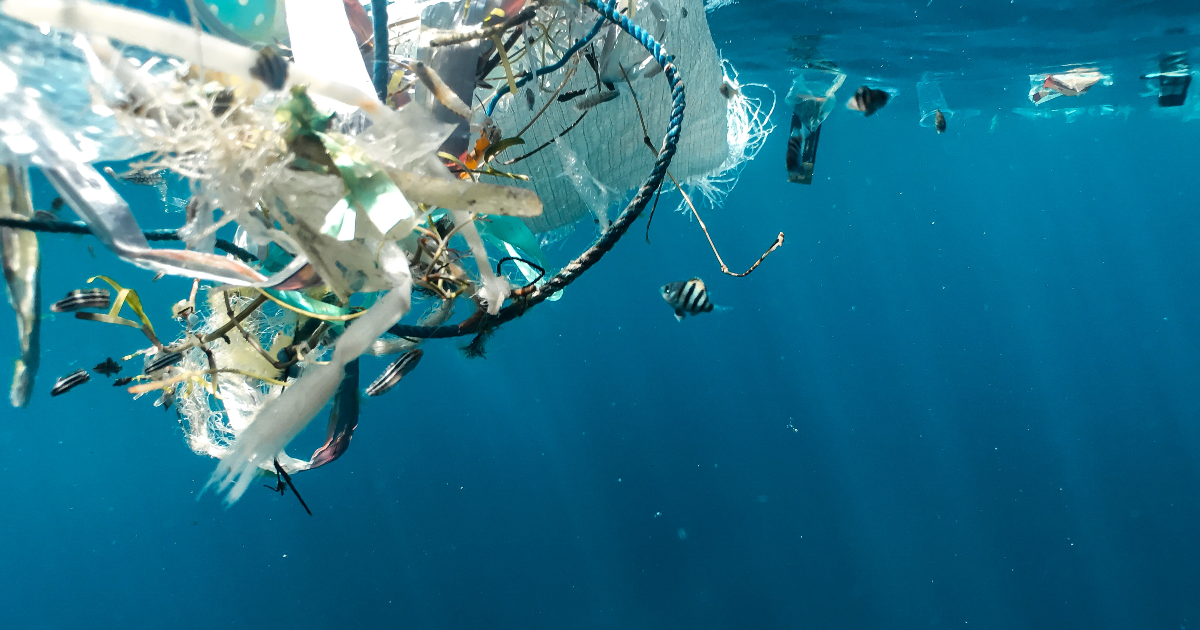 Image description: plastic waste floating in the ocean by a small fish

The earliest investigations of microplastics focused on microbeads found in personal-care products and pellets of virgin plastic that can escape before they are moulded into objects, as well as on fragments that slowly erode from discarded bottles and other large debris. These are then washed into water-bodies (both opened and closed). In 2015, oceanographers estimated that there were between 15 trillion and 51 trillion microplastic particles floating in surface waters globally. Other sources of microplastic have since been identified: plastic specks shear off from car tyres on roads and synthetic microfibres shed from clothing, for instance. These particles blow around between seascapes and landscapes.

Researchers have been worried about the potential harms of microplastics for almost 20 years — although most studies have focused on the risks to marine life. After his team found them on British beaches, Richard Thompson, a marine ecologist at the University of Plymouth, UK, coined the term in 2004 to describe plastic particles smaller than 5 millimetres across. Scientists have since seen microplastics everywhere they have looked: in deep oceans; in Arctic snow and Antarctic ice; in shellfish, table salt, drinking water and beer; and drifting in the air or falling with rain over mountains and cities. These tiny pieces could take decades or more to degrade fully.

One thing is clear: this problem will only grow exponentially.

From limited surveys of microplastics in the air, water, salt and seafood, children and adults might ingest anywhere from dozens to more than 100,000 microplastic specks each day, Albert Koelmans, an environmental scientist at Wageningen University in the Netherlands, reported this March. He and his colleagues think that in the worst cases, people might be ingesting around the mass of a credit card’s worth of microplastic a year.

One thing is clear: this problem will only grow exponentially. Almost 400 million tonnes of plastics are produced each year, a mass projected to more than double by 2050. Even if all plastic production stopped tomorrow, existing plastics in landfills and the environment — a mass estimated at around 5 billion tonnes — would continue degrading into tiny fragments that are impossible to collect or clean up, constantly raising microplastic levels. Koelmans calls this a “plastic time bomb”.

The larger microplastics are more likely to exert adverse effects, if any, through chemical toxicity. Manufacturers add compounds such as plasticisers, stabilisers and pigments to plastics, and many of these substances are hazardous — for example, interfering with endocrine (hormonal) systems. But whether ingesting microplastics significantly raises our exposure to these chemicals depends on how quickly they move out of the plastic particles and how fast the specks travel through our bodies — factors that researchers are only beginning to study.

Another idea is that microplastics in the environment might attract chemical pollutants and then deliver them to animals that eat the contaminated specks. But animals ingest contaminants from food and water anyway, and it’s even possible that plastic specks, if largely uncontaminated when swallowed, could help to remove pollutants from animal guts. Researchers still can’t agree on whether pollutant-carrying microplastics are a significant problem, says Jennifer Lynch, a marine biologist affiliated with the US National Institute of Standards and Technology in Gaithersburg, Maryland.

Perhaps the simplest model of harm — when it comes to marine organisms, at least — might be that organisms swallow plastic specks of no nutritional value and don’t eat enough food to survive. Lynch, who also leads the Center for Marine Debris Research at Hawaii Pacific University in Honolulu, has autopsied sea turtles found dead on beaches, looking at plastics in their guts and chemicals in their tissues. In 2020, her team completed a set of analyses for hawksbill turtle hatchlings under three weeks old. One hatchling, only 9 centimetres long, had 42 pieces of plastic in its gastrointestinal tract. Most were microplastics.

How to reduce micro-plastics

Wastewater and drinking-water treatments are highly efficient in getting rid of microplastics. Studies, albeit limited, show they remove more than 90% of microplastics. But there is a lot that individuals can do to reduce microplastics too. Perhaps the most critical step lies in changing the way we think and behave. Modern lifestyles are full of single-use plastic items such as straws and cups. It is thought that we use plastic cutlery once for an average of three minutes, but it remains in the environment for hundreds of years. Single-use plastic, including food packaging, is also one of the biggest contributors to plastic pollution. Thinking about how plastic is made and what happens to it after it has been used makes a difference.

However, there are limitations to changes in plastic consumption from the medical industry to accessibility. Therefore, changes in what plastics are used, their disposal and management, must be analysed further.

Recycling is one of the most effective means of reducing the use of virgin plastic, but first, it has to be collected, and today two billion people lack access to waste collection systems. By 2040 that number will double to four billion, mostly in rural areas in middle- and low-income countries.

The coronavirus pandemic has added to the disarray. Falling oil prices have made the production of virgin plastic cheaper than ever. Demand for consumer goods sheathed in disposable, single-use plastic has soared as shoppers seek protection from the virus.

Before the pandemic, industry resisters argued that systemic change was too big, too complicated, too expensive, and time-consuming to pull off. COVID-19 put the lie to those arguments after shortages of toilet paper and other goods scrambled the supply system and upended shipping lines. We can see how fast supply chains can adapt and keep up.

On another note, clothing is one of the world’s largest sources of pollution. Most of your clothing probably has polyester or other forms of microplastics in it. When you wash these clothes, microplastic fibre leaks out into the water. A single load of laundry can release over a million microplastic fibres. In order to combat this, you can install a filter in your washing machine to catch these plastics. Then, you can properly dispose of them. You can also wash your clothes on a lower setting, wash by hand, try to buy less synthetic clothing, or just try to ensure you do loads of washing that fill up the machine entirely.

Strategies for buffering marine biodiversity against global threats, such as climate change and ocean acidification, include reducing additional stressors, such as pollution and overfishing. Because plastic waste is one of the most prevalent of marine pollutants, reducing plastics input should be a high priority. Given the impossibility of removing all microplastics contamination from the oceans, the impetus is on all of us who are able to make the change—governments, scientists, and individuals—to reduce our levels of plastics consumption and waste before we induce permanent alterations to our fragile ecosystem and planet.