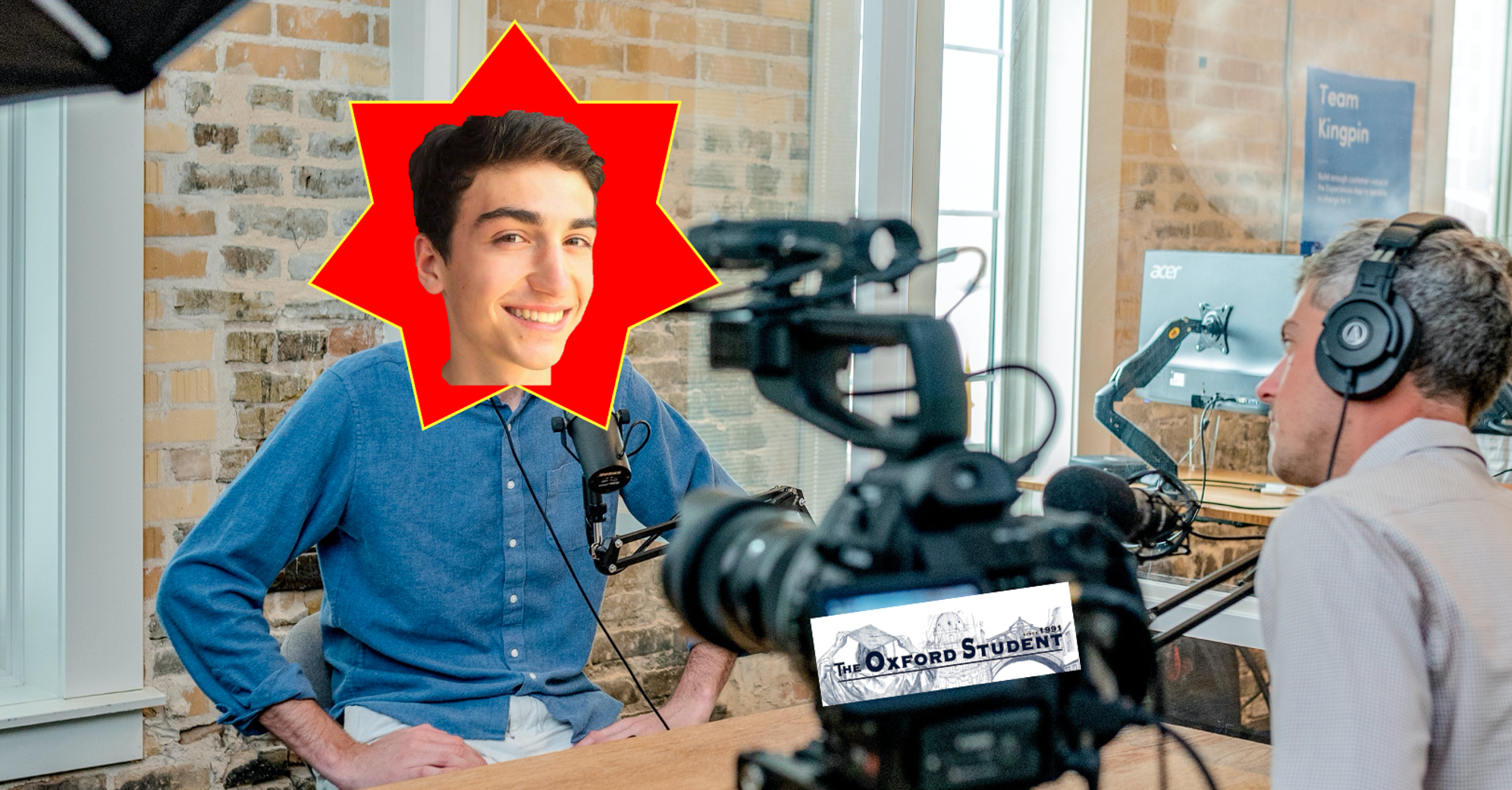 Is student journalism a waste of time? Nothing could be further from the truth…

Image Description: Jamie’s head superimposed onto an image of a man sitting in front of a camera.

There is something fascinating about the rather widespread cynicism about student journalism: the activity of the hack, a worthless contribution, something no one reads. This is strange, untrue, and self-defeating.

First, it’s strange when you consider that students don’t earn any money out of it. Many believe student journalists are only in it for the CV-bolster but the reality is that most of us aren’t in it for that. For a start, many are in it because it is a social extracurricular activity where one can meet people: I met my girlfriend on the OxStu. It’s a good way to develop one’s own journalistic skills. But crucially, I think most are in it out of a sense that news, criticism, and public communication is important. And they’re not wrong. Local news is crucial to maintaining strong democracies, enlivening communities, and keeping people in the loop. And student news is vital for foregrounding student interests (often missed or belittled in the national media), representing the under-represented (see sections like Pink, Green, Identity), and challenging the country’s orientation towards the middle-aged.

Let’s start with democracy: Pulitzer board co-chair Joyce Dehli’s article summarises this point nicely: “rebuilding local journalism [i]s an essential democratic force”. This is a strain of thought advanced by many—from those concerned with the state of democracy to those worried about journalism ecosystems. So many of us were disappointed by national news media during Brexit, Trump, and beyond. The reality is that the news can be skewed—and skewed towards the interests of wealthy media moguls, the news can perpetuate misinformation (c.f. climate change…), and the news fails to represent the interests of the disenfranchised, marginalised, and those in the minority.

the typical attitude towards student journalists is unfair—even if you don’t think our work is quality (more on this in a second), we’re not harming anyone

As Dehli notes, there used to be a patchwork of journalism such that local journalism covered the interests of the aforementioned people. This local journalism was covered more effectively by those properly embedded in the community—like us students. The product of this was then studied by and, when appropriate, amplified in the national media. But “today, less local journalism—and less meaningful journalism—moves through a diminished network.”

The reality is, local journalism is under threat because of lack of funding. But we have plentiful funding at the student level, in part because students are happy to work for free. So a solution to this problem is sitting at our feet. No, I’m obviously not suggesting that The Oxford Student alone will uphold democracy. But democracy has always been an institution which can only be upheld by the efforts of all people—we must all do our part. And I think this is definitely one way to contribute positively. Indeed, during my time a number of student stories have been reflected in national newspapers from The Telegraph to The Guardian—directly shining student interests onto the national scene.

It’s in this sense that the typical attitude towards student journalists is unfair—even if you don’t think our work is quality (more on this in a second), we’re not harming anyone. At worst, we are rehashing existing journalism to a student audience; at best, we are supporting and developing students in their ability to write and report, and circulating novel and student-focused journalism to students. And we are doing it for free.

It keeps us all in the loop, which isn’t something to be underestimated—especially in a place as atomised and decentralised as Oxford.

Furthermore, Oxford as an ecosystem is greatly ameliorated by the existence of student journalism: it serves to spread news across the community—about COVID, student interests, and interesting opportunities. It keeps us all in the loop, which isn’t something to be underestimated—especially in a place as atomised and decentralised as Oxford. Different political views will frame this variously as a service or a socially useful activity—either way, the fact that students are producing this—and for free—shouldn’t be overlooked. It allows for the sharing of more and more diverse experiences to more and more diverse students. It breathes life into debates and discussions that shape the institution we live in. It’s an information lubricant that keeps the wheels of communication turning.

Onto the matter of quality—many people I know at this point retreat from cynicism that others may be doing something of value to a claim that student journalism is poor quality and self-indulgent. Well, I suppose I should leave it to the reader to determine quality, but let me suggest one thing: of course, student journalism is generally not quite as good as national journalism (although I’m not sure if it’s any worse than The Oxford Mail…). But so what? Some of it is actually very high quality (in my opinion), and some of it is a great way for students to develop their writing and journalistic abilities while performing a useful function. And frankly, why shouldn’t students be “self-indulgent”—why shouldn’t they write about what they are interested in? To fall into this narrative is to fall foul of toxic narratives about productivity and efficiency. Sometimes self-indulgent writing is the most important precisely because it promotes writing that wouldn’t otherwise be considered ‘utility-maximising’.

the more newspapers there are, the better news becomes. The more, the merrier.

I finish by discussing the controversy, at points, about the creation of two new Oxford student newspapers in the last three or so years. But personally, I think it is great—the greater the diversity of opinions and writers and the more newspapers there are, the better news becomes. The more, the merrier. Not just because each of the student newspapers must improve to keep going, but also because more perspectives are considered and discussed, more people are writing and reading news, and there is more accountability and debate in the student journalistic world.

I wonder what readers will make of this. Is this another self-indulgent piece of personal justification? Have I convinced anyone—at least to stop portraying student journalism as a blight on Oxford, and ideally to recognise the value in student journalism? Hopefully you will join the cause to ensure that we do produce good student journalism—not only to justify student journalism, but also to further some of these causes. I suppose my parting message is simple: remember the true enemy—it is not our fellow students, but those who snub our concerns and deride our perspectives.