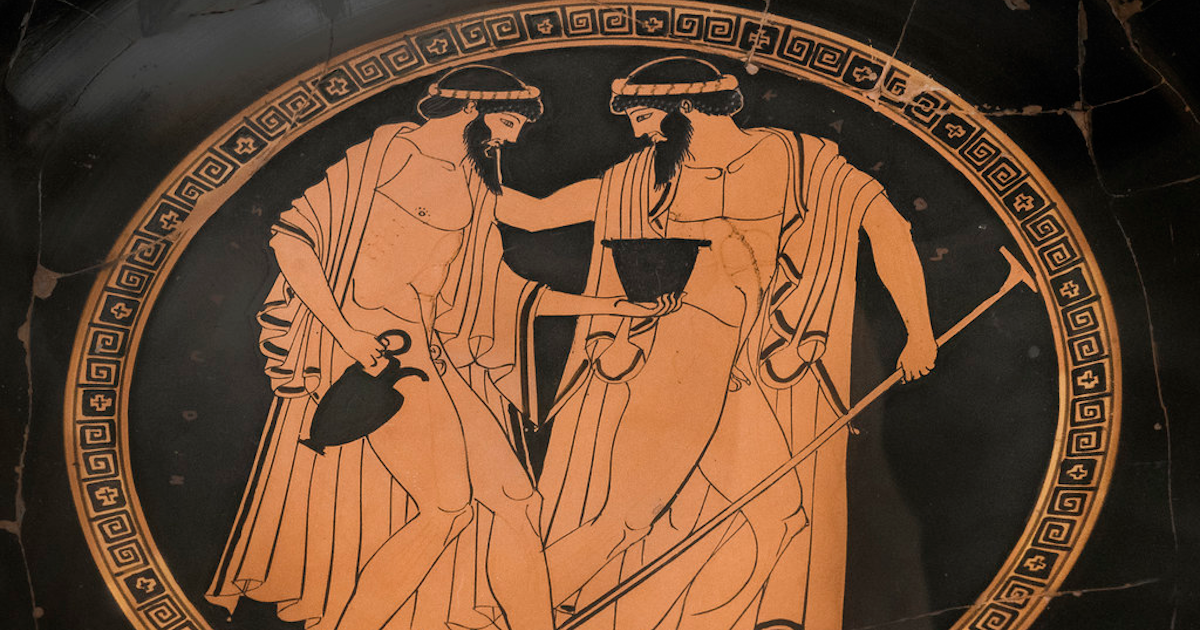 Pederasty, Pornoi and parties: the Greek symposium and homoeroticism

The Greek symposium was a respectable affair… until it wasn’t. The men of ancient Greek societies gathered in small groups with their friends and enjoyed a night of engaging discussion, exciting entertainment and (most importantly) copious amounts of alcohol. The event was used to make connections and further a male’s education, particularly younger men who had a lot to learn about the complicated politics of the Greek polis. However, the symposium was, at its heart, a party, and the Greeks knew all the best ways to have fun.

Poets and vases describe and depict scenes of hilarious entertainers, musical accompaniments and the most beautiful foreign women reclining alongside the gentlemen attendees. However, this is the Pink section and we aren’t here to discuss the females invited to symposia: instead we will focus on the pederastic relationships of erastes and eromenos, the presence of naked slave boys as well as the pottery and poetry inspired by these private gatherings. This article will focus on the homoerotic side of Attic (Athenian) symposia, as this is were most of our evidence for symposium, and homosexual relationships within them, is found. I will also discuss the poetry of Theognis from Megara Hyblaea, a Greek colony in Sicily, whose work reflects the scenes found on Attic pottery and other fragmentary sources.

The Greek symposium was a respectable affair… until it wasn’t.

The symposium took place in the andron, a special room lined with couches that opened out into the street, away from the main body of the house. It was a male room, no women allowed (except gorgeous foreign prostitutes of course) so male relationships were explored and strengthened within them. And I mean relationships~. The most commonplace of these was the erastes and eromenos, an educational relationship between mature men and younger, less experienced, boys. They taught them everything; philosophy, poetry, politics and how to party! This was especially common in aristocratic families, these young men were able to network and build political links alongside their erastes.

This was, for the most part, a normal educational relationship, the erastes would mentor their eromenos and teach him how to succeed in the world. Of course, there is one skill in which every man needs an education: the art of pleasuring a partner! No well-educated Athenian man could fall into his marriage bed with no previous experience, and you can only be taught so much by… you know… the women you are expected to pleasure. Instead, the erastes would teach their young partners exactly how it’s done, through demonstration. The eromenos would submit to his erastes and would be shown how to give his future wife pleasure, as well as experiencing some himself! This pederasty was socially recognised, and standard, particularly in powerful poleis like Athens and it was often depicted, in great detail, on vases.

Of course, not every relationship between males was as respectable as formal pederasty. The Athenains needed no excuse to seek pleasure in any partner they chose, especially after a few kylixes of wine! No symposium was complete without a selection of hetarai, pornai and (of course) pornoi. Pornoi were male prostitutes, depicted on vases as young, handsome, naked slave boys often serving reclining symposiasts. Unlike eromenos, pornoi did not recline alongside the more mature attendees (unless in the process of pleasuring them) nor did they sit at the symposiasts feet. They are usually depicted standing, serving wine to the Athenian citizens until they require further services.

This pederasty was socially recognised, and standard, particularly in powerful poleis like Athens.

Pornoi were only required as sex-slaves and servers, their female equivalent being Pornai and their female superior being the educated, metic hetarai who were allowed intellectual freedom due to their non-Athenian backgrounds. Unfortunately, we know little about pornoi as individuals, they are often referred to as ‘boys’ in poetry alongside descriptions of their youthful beauty and ability to perform their job well. Several poets also name their favourite boys, some even recording competitions to win over individual boys for the night, or for life.

The poet Theognis addresses many of his poems to his beloved boy, Cyrnus. Though the poet detests the constant political conversation and backstabbing aristocracy in the symposia he continues to attend, not just for fear of social rejection but also for love. He is completely obsessed with the young pornoi, dedicating several poems to him in an attempt to win his heart. His book II is focused on homoeroticism and his love for Cyrnus. “Happy is the man who goes home and engages in amorous exercise, sleeping with a handsome boy all day long” (1335 – 36). Moving on from the couples apparently impressive stamina, the poet clearly finds happiness in this relationship with Cyrnus. It is unclear whether this was reciprocated, or if Cyrnus cared little for Theognis, however, it indicates that the symposium and Greek homosexual relationships could mean more than simply mutually beneficial, ultimately educational, sex.

This depth is not as clear on vases where the focus is a combination of the realistic depictions of male bodies, clothed or naked, and sexual actions. This ranges from kissing to penetration and all of these scenes have a marked power difference between the two males. The maturer men, the erastes or the citizen males depending on the scene, is taller and, usually, broader than the eromenos or pornoi. These images appear on sympotic wares like kylix cups and kraters, they would have been used and displayed while symposiums were taking place reminding the participants of the fun yet to come.

“Happy is the man who goes home and engages in amorous exercise, sleeping with a handsome boy all day long” (1335 – 36).

On the surface, this open homosexual culture may seem like a good thing. A step forward, even, from our judgemental society. Certainly, when it comes to men having the freedom to explore their sexuality without it being taboo, there are good elements in Greek sexual culture. However, it is extremely dubious how consenting the pornoi, and to an extent the eromenos, were. It is unlikely that these sex-slaves had much choice as to whether they went to symposia and entertained certain men. It is also uncertain that all symposiasts treated their boys with the same apparent love and affection that Theognis did Cyrnus. It would be wrong of me to do an article on this homoerotic culture as if it were all sunshine and rainbows, there were definitely a lot of flaws with this system.

Ultimately, men were still expected to marry a female and have a family regardless of their behaviour in symposia or their actual sexuality. To the other extreme, pederasty was expected even if a young man, or even the older men, had no sexual interest in males, which was probably fairly traumatising for them. Sympotic culture was a lot more open and accepting than many modern societies but it still had major issues and, for the most part, wasn’t healthy. Though we may laugh at the ridiculously explicit images on Greek vases and we may find Theognis’ gay crush on Cyrnus both amusing and cute, we need to bear in mind the consequences of such a culture for young males and not hope for a reversion to this kind of society. Instead, let’s work towards a nice middle ground where all LGBTQ+ relationships can be open and accepted without the forceful or public nature of display.