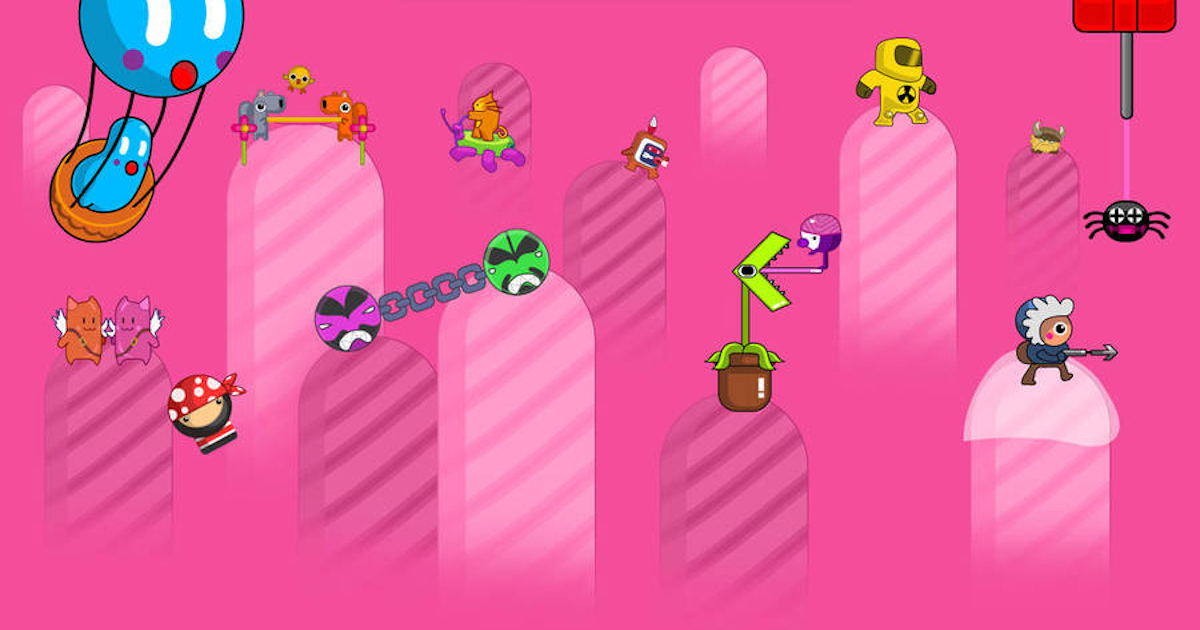 A fond early memory of gaming for me is playing browser games on the computer. Whether it was being allowed computer time as a kid whilst my parents wanted to relax, or sneaking a short game into an ICT lesson in year 7, the idea of the browser game always brings me nostalgia. The classic sites for such enjoyment were Miniclip, Friv, and of course Coolmathgames. Some of the gameplay and aesthetics of those early games have really shaped my tastes to this day. In particular, the simple but well-explored gameplay mechanics, and bold visual and sound designs of the games developed by Nitrome have had a great impact.

Nitrome as a company is a London-based video game developer, founded in 2004. Formed by a partnership of graphic designers intending to make games for early mobile phones, they set up their website nitrome.com to demo their first idea – Chick Flick – as a flash browser game. In the 17 years since, the company has developed over 140 flash games, which they often license to other websites such as Miniclip and Friv.

The simple but well-explored gameplay mechanics, and bold visual and sound designs of the games developed by Nitrome have had a great impact.

Even before I had discovered Nitrome’s own website, their games stood apart to me on Miniclip for their fantastic style. Like a film production company, Nitrome games open with a chiptune jingle and a stylised logo before showing you a menu introducing you to whatever highly characterised world the game is set in. Nitrome’s games use pixelated art with bold colours, taking whatever theme the game has and really running with it. Gameplay elements also reflect this idea, with earlier levels often being very simple mechanically, but with later ones stretching the concepts as far as they can go.

Other games on Miniclip and Friv often lacked this unity of design that Nitrome games always succeeded in delivering. I can remember too many games that, whilst fun, had poorly drawn or massively out of place visual assets. Other games looked good, but were eerily quiet with little gameplay further than the initial idea. Nitrome’s bold, unique designs created a complete experience, whilst at the same time the things that the games held in common – pixelated art and constant chiptune sound – made you feel like you were enjoying part of a collection.

A few games which I have the fondest memories of include:

“Rubble Trouble”, a demolition game in which you have to demolish a building with the tools provided (think angry birds without the catapult). This was my first Nitrome game, and the progression of the gameplay combined with the bold yellows and cute pixel demolition workers has held my attention all these years later.

“Square Meal” is a game with a quite simple premise of controlling a troll trapped in a maze and trying to eat all the enemies within. The style of the game is good, but the real memories I have of this game is from the multiplayer experiences I had with my little brother in which we would largely devote our time to ‘griefing’ each other rather than getting through levels.

Another game I played with my brother often was “Flipside”, in which you race tron style bikes. We were absolutely terrible at “Flipside”, I don’t recall ever making it through the first level. Often the split screen would show the two of us in wildly different areas on the course, with one of us floundering upside down in some unknown area. What really made the game appealing was the simple but flashy gameplay, that was extraordinarily satisfying when you finally built up enough speed to ride up over the walls.

Nitrome has transitioned, over the course of the last 10 years, away from browser games, instead focusing on mobile games, and even releasing some on console. Since the discontinuation of Flash on adobe has rendered many of their games unplayable, they have recently undertaken a project to republish ports of the games onto html5. This move has been controversial, however, as there have been complaints about the quality of these ports, and Nitrome has been taking a litigious attitude to any attempted fan ports made in order to experience the games with the quality fans remember.