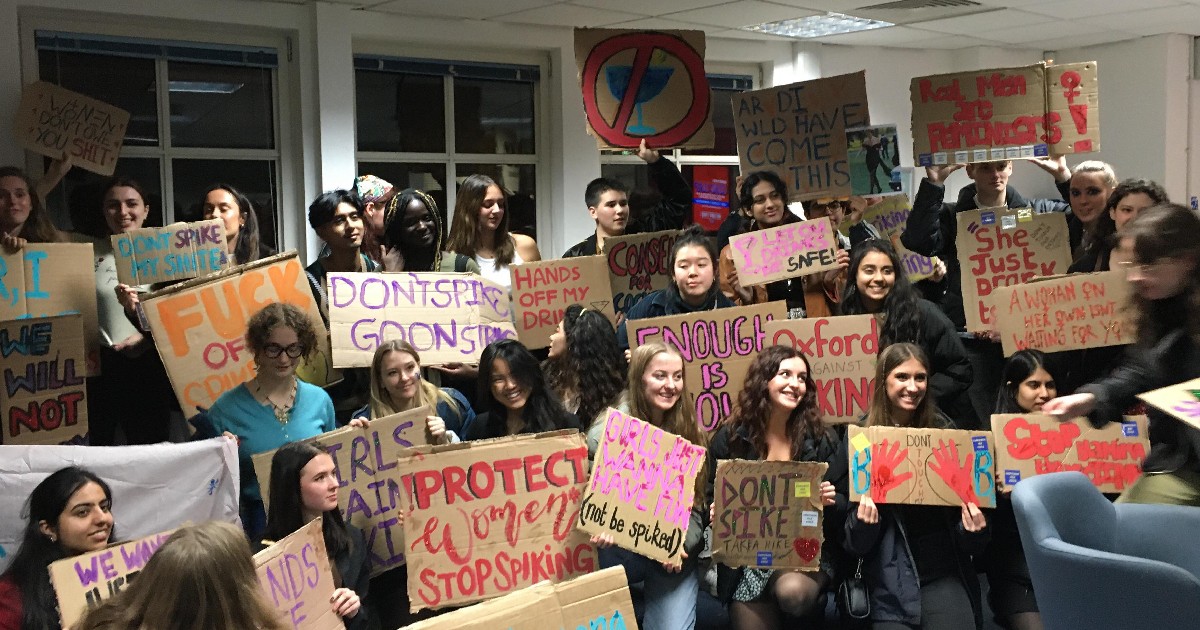 Image Description: a group of protestors holding banners and signs in the SU Building.

In response to the rise in drink-spiking cases in the country, 20 JCRs have signed an open letter to nightclubs in Oxford demanding the implementation of more safety measures to prevent drink-spiking, ensure the safety of customers and hold perpetrators accountable.

It has been reported that drink-spiking can cause hallucinations, seizures and loss of consciousness, and can lead to theft and sexual assault or violence.

The open letter was addressed to nightclubs in Oxford and urged clubs to follow national demands made by Girls Night In after several nightclubs admitting that their CCTV does not cover all areas of their clubs.

These demands include asking for regular and comprehensive active bystander training for all bar and club staff, anti-drink spiking devices, a published written procedure on spiking and a clearly written procedure on reporting to staff. The letter also called for clubs to undertake Active Bystander training such as ‘Good Night Out’ at least twice a year and designate a welfare officer (or officers) who is identifiable with a high visibility jacket to provide a safe way home for female clubbers and intervene in cases of sexual harassment and hate crimes. Nightclubs are also asked to provide drink covers and test strips for both prevention and detection, set up further CCTV which covers all areas of the nightclub and publish posters and publicise on social media to affirm their zero-tolerance policy on spiking. The letter stated that the aims of implementing these measures is to “deter criminals before crime is committed, avoid trauma being caused and hold criminals accountable”, writing that it is morally right and economically beneficial for clubs do so to uphold their duties of care to all students on a night out.

Holly Housden from St. Hilda’s College and author of the letter told the Oxford Student that she wrote the letter because she found the news about spiking “frightening and traumatizing”, adding that “it’s so difficult to go into a club and feel safe anyway, let alone with the added addition of worrying about being spiked”. Given the urgency of the issue, “[the demands in the letter] need to be met” and that the letter is a clear message to clubs that they “can’t get away with” spiking happening in their establishments and “need to listen to students”. When asked about potential future actions colleges and JCRs can take on anti-drink-spiking, she suggested having more drink-spiking awareness events as part of freshers’ week, possibly as a part of consent workshops so “students know what to look out for, [especially] when it happens to their friends.”

The letter was sent to clubs after ‘It Happens Here’, a campaign group run by the SU staged a ‘Girls Night In’ protest on October 27th (Wed) outside the Clarendon Building on Broad Street as part of a boycott of nightclubs to demonstrate against drink-spiking. Other Oxford organizations such as the Oxford Union also expressed their support of the movement, with the Union closing its Members’ Bar on Wednesday and a screening of ‘On the Basis of Sex’.

Atik Oxford, also known as Parkend, responded to the open letter to assure customers that all the measures requested in the letter were in place. The nightclub was also closed on Wednesday night, in support of the boycott.

“After much consideration and after listening to both our staff and our guests, we can confirm we’ve taken the decision to close our student night on Wednesday 27th October in solidarity with the nightlife boycott. Our commitment to guest safety remains our number one priority and we will continue to improve the measures we have in place with improvements to our training programmes, communication of our We Care programme and anti-spiking devices being made available. We will continue with our 100% search policy, our security wearing bodycams and our specialist welfare team including onsite medics and first aiders managing our medical room. We would like to show our support to our student partners this Wednesday in raising the awareness of safety in the night time economy. Let’s work together to stamp this out.”

The JCRs are still awaiting a response from the other nightclubs.