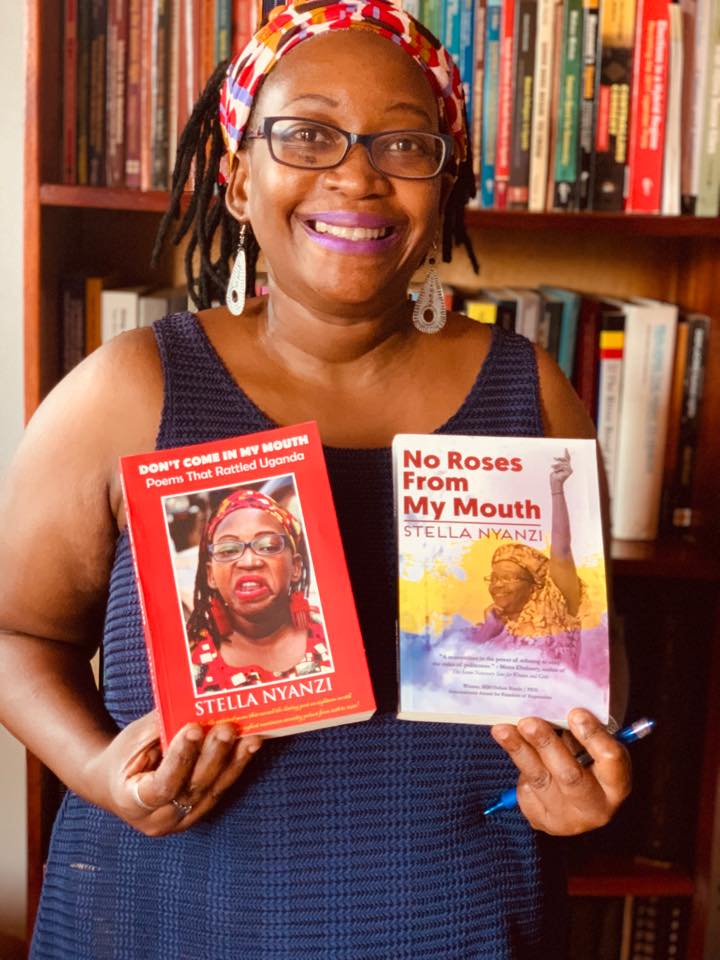 Protest, Profanity, and Poems from Prison: In Conversation with Dr Stella Nyanzi

At the time of my interview with Dr Nyanzi back in March, she informed me that she was currently in Kenya, having sought asylum after fleeing her hometown, Kampala, Uganda, after the January 2021 elections. In 2017, she had been convicted and sentenced to prison for her criticism of President Yoweri Museveni.

Over the years, Dr Nyanzi has made headlines for her radical honesty, charming cynicism, and fearless displays of profanity. She is no stranger to the Ugandan public and the controversy that comes along with her bravery. “Radical rudeness” is a brand of activism which she is known for: including stripping naked in protest at Makere University, baring her breasts in court, infamously writing a poem about Museveni’s mother’s vagina, and comparing him to “a pair of buttocks.”

Leading up to the Ugandan elections in January 2021, she had initially ran for office and campaigned under the hashtag #FromPrisonToParliament. My interview with Dr Nyanzi had given me a meaningful opportunity to learn more about her journey and the many roles of a writer, activist, academic and mother that she wears with unwavering pride.

Considering how Dr Nyanzi had initially been imprisoned for ‘cyber harassment’ due to her criticisms of Museveni, I began the interview by asking her about what she thinks of social media and its role in shaping the trajectory of modern-day activism.

“Right, so I mean, one of the things you begin with is the fact that I’m known for provocative Facebook posts, right? And I just think that, out of all the posts that I have made since I joined Facebook, there are probably (only) a hundred of those posts I’ve written on Facebook that are provocative. So I’ll be dismayed if people know me for just so little out of everything I do on Facebook. When I have access to the internet, and I’m living in the free world that is not behind bars of any form, I tend to write two times a day on my Facebook timeline… and my Facebook posts – many of them are very boring,” Dr Nyanzi responds.

“I think that there’s so much more to what I use social media for, apart from the those few Facebook posts that get international coverage. But in contexts such as Uganda, where things are highly repressive and we have a government that does not welcome criticism or critique… those of us who insist on free expression see a real positive link between social media and activism.”

“In Uganda, if you have access to data, or internet credit, or a wireless (connection) that’s constant and stable, it is a privilege in itself. To be able to read or type or even own a smartphone is a privilege, because the vast majority of people cannot afford this. So while I acknowledge that social media is powerful for activism, especially in repressive societies where the government can’t control the radio and TV and the print media, it has also become a totally different sort of ballgame for our government.”

That ability to connect immediately to a whole virtual world of netizens is important. And I think that’s the power of social media: the ease with which one replicates, shares a message.

“I think it has wide coverage, a way to reach beyond just national borders. It’s speaking to a whole group of netizens –  one can get collaborations and partnerships beyond  national borders. And I think of times where our repressive governments have shut down our internet – the entirety of social media was down during the elections. But it was allies and comrades in other countries who were Tweeting, Facebooking and hashtagging on behalf of Uganda and democracy. So that ability to connect immediately to a whole virtual world of netizens is important. And I think that’s the power of social media: the ease with which one replicates, shares a message.”

“I think that the platforms are vast, and the ability to organise discreetly, using these (online) groups that (would usually be) restricted, also where one determines how one can organise. When I was doing work with the LGBTQ community, we needed to communicate, and it was dangerous to meet in public spaces. It was much easier to meet secretly online. Which is not to say that social media or digital activism doesn’t have its forms of digital violence – there is trolling, bullying, harassment, misogyny and online homophobia… But I think that it is necessary if one is going to avoid physical harm from men with guns and women with guns and also freedom from being imprisoned.”

The topic of imprisonment thus leads me to enquire Dr Nyanzi about her own time spent in the Luzira women’s prison. She tells me about the poems she wrote while serving her time. “When the authorities found out that my poems were being smuggled out of prison, they tried to stop me. My diary and my book of poems were taken away and burnt.”

Dr Nyanzi’s collection of poems, ‘No Roses from My Mouth: Poems from Prison’, was eventually published as a book in 2020, the same year in which she was eventually awarded the Oxfam Novib/PEN International Award for Freedom of Expression. “Would beautiful poems dethrone a tyrant?” she writes in one of the introductory paragraphs of the poetry collection, a question so simple and straightforward, yet so equally profound.

As she speaks to me, Dr Nyanzi continues to describe how she still keeps in touch with the people she has met in prison, and how prison life differs significantly for men and women. In Uganda, most political prisoners are usually men. While the men’s prisons had allocated a specific section for political prisoners, this was not the case for female inmates.

When the authorities found out that my poems were being smuggled out of prison, they tried to stop me. My diary and my book of poems were taken away and burnt.

“Political prisoners who are men had access to TV, radios, medical facilities, but I was denied access to all that. I was even denied access to my own cousin who was a doctor, and denied access to post-abortion care.” In fact, one of the poems from her collection addresses the grievances of losing her pregnancy whilst behind bars.

I take this opportunity to ask Dr Nyanzi about her experiences of motherhood, and her family.

“What have you got to say regarding stereotypes of mothers expected not to be vulgar, expected to be ‘ladylike’ and polite and to embrace more ‘traditional’, submissive forms of femininity? How has motherhood shaped your activism, and what do people often perceive of it?” I ask.

Dr Nyanzi responds by telling me that, “I think if I weren’t a mother, I probably wouldn’t do at least ¾ of the activism I’ve done. If I were just thinking about myself, I wouldn’t know if I would be fighting for a better Uganda. In a way, motherhood keeps me very grounded. The children who play with my children reveal the reality of everyday Ugandans to me. I think I wouldn’t so much be interested in ‘a good world’ if I didn’t have any children of my own.”

“But I also just want to add that I’m a very different sort of mum than my own mum. My mother was the daughter of a Reverend. Her mother was very proper – they believed in Christian morality and how Christianity defined femininity and how to become a ‘proper respectable woman…” Dr Nyanzi says.

“Now, I am sure the poor woman in her grave… is shocked every time I perform my own version of womanhood and femininity,” she adds with a laugh.

“But my mother was not docile or submissive, she dealt with a lot of abuse from my father, publicly in court, but also in front of our family. And I am with her on this. My mother also went to a British colonial boarding school, which I also went to, and the sort of education which we received was to raise good wives for Chiefs who were working as administrators and collaborators for the colonial government. Many of us failed to achieve the high and unattainable standards of what it means to be ‘good’.”

“I feed my children with takeout, once in a while, and sometimes we even buy street food. But ‘a good woman’ doesn’t do that, for example. These stereotypes trap us, and they make us feel like failures if we cannot meet these very high standards.”

“I think it is very liberating to embrace the many forms of motherhood in all its diversity. We must not be trapped by homogenous ideas of motherhood.” Dr Nyanzi enthusiastically continues to tell me about how her sons helped choose her lingerie when she had decided to undress as a form of protest.

Dr Nyanzi addresses the frequent double standards in which highly educated women are often expected to not be explicit or profane. ‘I wear lipstick, I speak like an academic, I take off my bra… and this is usually not what politicians look like.’

Earlier in our interview, Dr Nyanzi also spoke about the Amuru land grab protests, in which a group of elderly women had stripped naked in defiance of government evictions from their ancestral lands. She argues how her radical activism is about an inversion of power metrics, in which, “the scandal, the disruption, the graphic form of protest,” in revealing her naked body in defiance of  the Museveni regime, “is what makes it so effective.”

Dr Nyanzi also addresses the frequent double standards in which highly educated women are often expected to not be explicit or profane. “I wear lipstick, I speak like an academic, I take off my bra… and this is usually not what politicians look like,” she insists.

“My daughter’s classmates wrote me letters and thanked me for protesting… When I die, I hope my children will be proud of me as a woman who at least tried to change things, instead of just waiting for the dictator to die,” she adds.

Before we conclude our interview, I also manage to ask Dr Nyanzi about her experience running as a member of parliament for the January 2021 elections. “Was there a turning point that inspired your trajectory to be involved with more constitutional forms of politics, instead of the radical activism that you had initially been involved in?” I ask.

She cites that her #FromPrisonToParliament campaign was driven by the desire to be part of change, especially considering the upheavals caused by the Covid-19 pandemic. “The lockdown, and the violations which were happening, was the biggest push… the fact that I was arrested for protesting the need for food,” had driven Dr Nyanzi to be even more involved. She had campaigned as a member of the Forum for Democratic Change (FDC) party, which she cites as, “isn’t perfect, but is anti-establishment.”

“So what did you learn most from the experience?” I ask, in conclusion.

“What did I learn most from the experience?” she echoes, laughingly. “I learnt that politics is a dish I love to eat… No one is going to make the world what I want to make it to be, unless I do it myself.”

Dr Stella Nyanzi is a Ugandan activist, academic, writer and politician. She has also worked to raise awareness on period poverty, through her #Pad4GirlsUG campaign. She has since returned to Kampala in April 2021, after spending several months in Nairobi, in the aftermath of the January 2021 Ugandan elections. Dr Nyanzi’s Facebook page can be found here, and she Tweets at https://twitter.com/drstellanyanzi. She is currently in the midst of releasing her second book of poems, ‘Don’t Come in My Mouth: Poems that Rattled Uganda.’  In August 2021, a feature-length documentary about Dr Nyanzi won the IDFA Spotlight Award in Durban, South Africa. The film, entitled ‘The Woman Who Poked The Leopard’, was directed by the Ugandan feminist filmmaker, Patience Nitumwesiga.