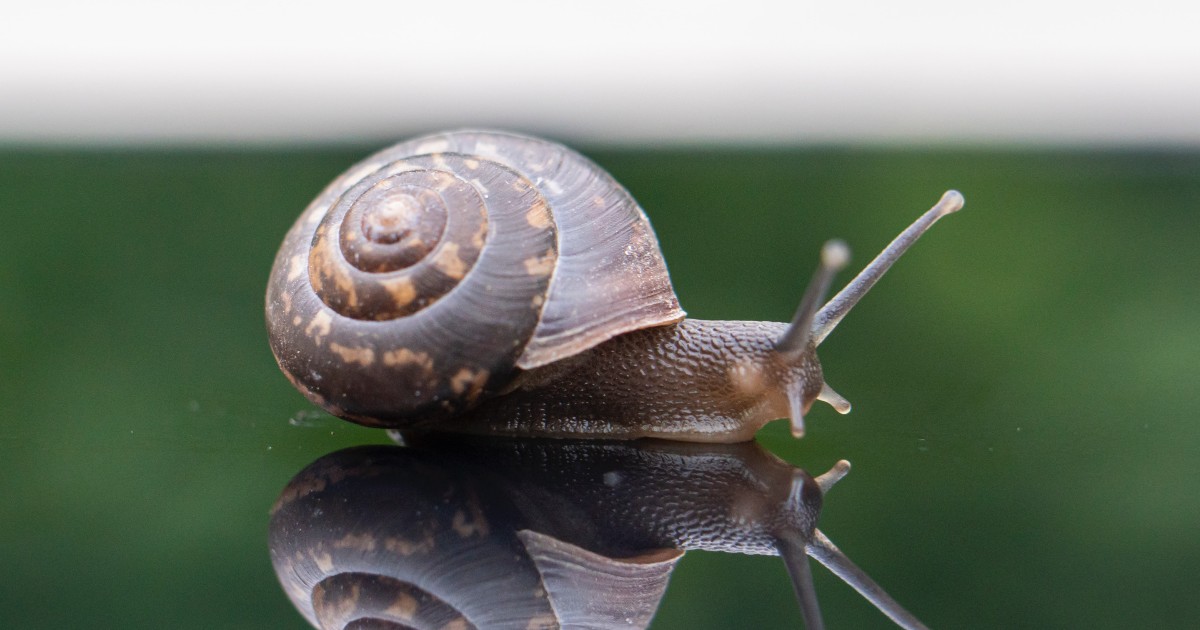 For the Love of the Immortal Snail

Image Description: a snail on a green background

“You and a super intelligent snail both get 1 million dollars, and you both become immortal, however you die if the snail touches you. It always knows where you are and slowly crawls toward you. What’s your plan?”

These words, originally from a post on r/AskReddit, form the basis of a trend that has taken TikTok by storm. Users have used various mediums to enact imaginary scenes that would follow from such a scenario, from drawn renditions of the grandiose meeting between the human and the snail at the end of the universe, to collaborative TikToks in which accounts representing snails and humans each try to outcompete each other. The question looming over this trend, however, is not only how people have responded to the hypothetical situation, but why TikTok has become so obsessed with it. Further examination of both these questions reveals that they are, surprisingly, interrelated. In fact, as most users have come to realize, the scenario is intended to be futile, but this futility is precisely what makes the scenario so alluring.

While countless users have attempted to provide proof to the contrary, these each fail to account for basic elements in the setup of the question. One TikTok user (@hyperfocuspod) highlighted that as long as you lived a normally mobile life, the snail would be mathematically guaranteed to get further and further from you. That is, operating off the perfectly reasonable assumption that the snail starts at least 30 miles away from you (or you are able to get at least 30 miles away from the snail at the start of the scenario), they claim to prove that “if you are a normal human being and leave your house a decent amount, you’ll continue to put more and more space between you and the snail”. However, this proof requires severely limiting the snail’s hyperintelligence – without these imposed limitations, there is no reason why the snail is confined to trying to take the most direct path, or even to only crawling as fast as it can instead of finding alternate methods of mobility. While many users argue that the original intent of the question was to provide the snail with just enough hyperintelligence so that it would always know where you are, moving the argument to focus on the question’s intent does not support the case of @hyperfocuspod. If the snail was only intelligent enough to track you, there would be very little point in the snail receiving 1 million dollars as well, according to the original phrasing of the question. The snail must be at least intelligent enough to strategize about how to spend 1 million dollars, already making it far more capable of critical thinking and planning than most humans. Hence, @hyperfocuspod provides a zealous but ultimately overwhelmingly weak proof that we can escape the snail.

The snail must be at least intelligent enough to strategize about how to spend 1 million dollars, already making it far more capable of critical thinking and planning than most humans.

A better proposed proof accounting for the unrestricted hyperintelligence of the snail was popularized by u/dirkson on the original subreddit post, and is generally accepted as proof of the feasibility of escaping the snail. u/dirkson spends 500,000 of his endowment to pay others to capture and seal the snail within various layers of metal, and then dumps the snail at the bottom of the Marianas trench. He then invests the rest of his money and waits for his wealth to snowball, meanwhile investing in space travel technology, whereupon he places the snail near a supermassive black hole and pilots his own ship away from the snail at near the speed of light. Theoretically, u/dirkson should have no problem surviving till the end of the universe. Here, while there are arguments that the snail can easily avoid capture and imprisonment with a combination of his own endowment and hyperintelligence (as u/Fish-Knight writes, “decoy snail”), such arguments do indeed miss the point. As the question pits your increased mobility against the snail’s potentially greater intelligence, trying to quantify how much more intelligence can compensate for reduced mobility is wasted effort.

Instead, as one particularly enlightened portion of snail trend Tik Tok recognizes, even momentary consideration of the experience of undertaking a successful escape plan makes it abundantly clear that the greatest obstacle to escaping is not feasibility, but willpower. As u/dirkson describes, his successful plan allows him to reach the end of the universe, a universe “with nothing it in except for infrared heat, one hyperintelligent snail suspended in an inky void, and one human screaming away from it at .99C.” This presents a truly dismal situation indeed – what a lonely universe that would be! If we limit our plan to focus only on maximizing survival time, even the most stubborn would find themselves succumbing to the absurdity of human existence likely before even the end of the solar system. Instead, at least as much of the plan needs to be devoted to identifying goals to pursue outside of survival, to finding reason to survive until the end of time in the first place.

There is little we desire that is not inexhaustible, and even inexhaustible passions lose their value once we gain the ability to enjoy them for eternity

Yet such a reason does not exist – there is little we desire that is not inexhaustible, and even inexhaustible passions lose their value once we gain the ability to enjoy them for eternity. Wealth becomes pointless once society ends, love is impossible unless any species can be made immortal as well. Perhaps we could devote our life to making society or our loved ones immortal, but this is working against entropy itself. And if we devote ourselves to learning, either knowledge is finite and will hardly entertain you for half of eternity or knowledge is infinite and all knowledge loses its value.

Very quickly, the question of the immortal snail takes on an existential grandeur, and it is this aspect that so intrigues much of TikTok. While TikToks discussing how to escape the snail or enacting competitive situations between snail accounts and human accounts are growing in popularity, the best TikToks on this trend in my opinion have always been the ones where we learn to face the snail. Will we welcome the snail with open arms long before the end of time, or will we survive to begrudgingly salute it as the universe collapses in on itself? The question was never how to escape the snail, but whether there is reason to escape at all – and as so many users have realized, I don’t believe there is.

After all, even an immortal soul must long for love, for passion, for meaning, and we exist in a universe where these things only exist because of our mortality. And when you have only the snail left, how could one not long for its touch?