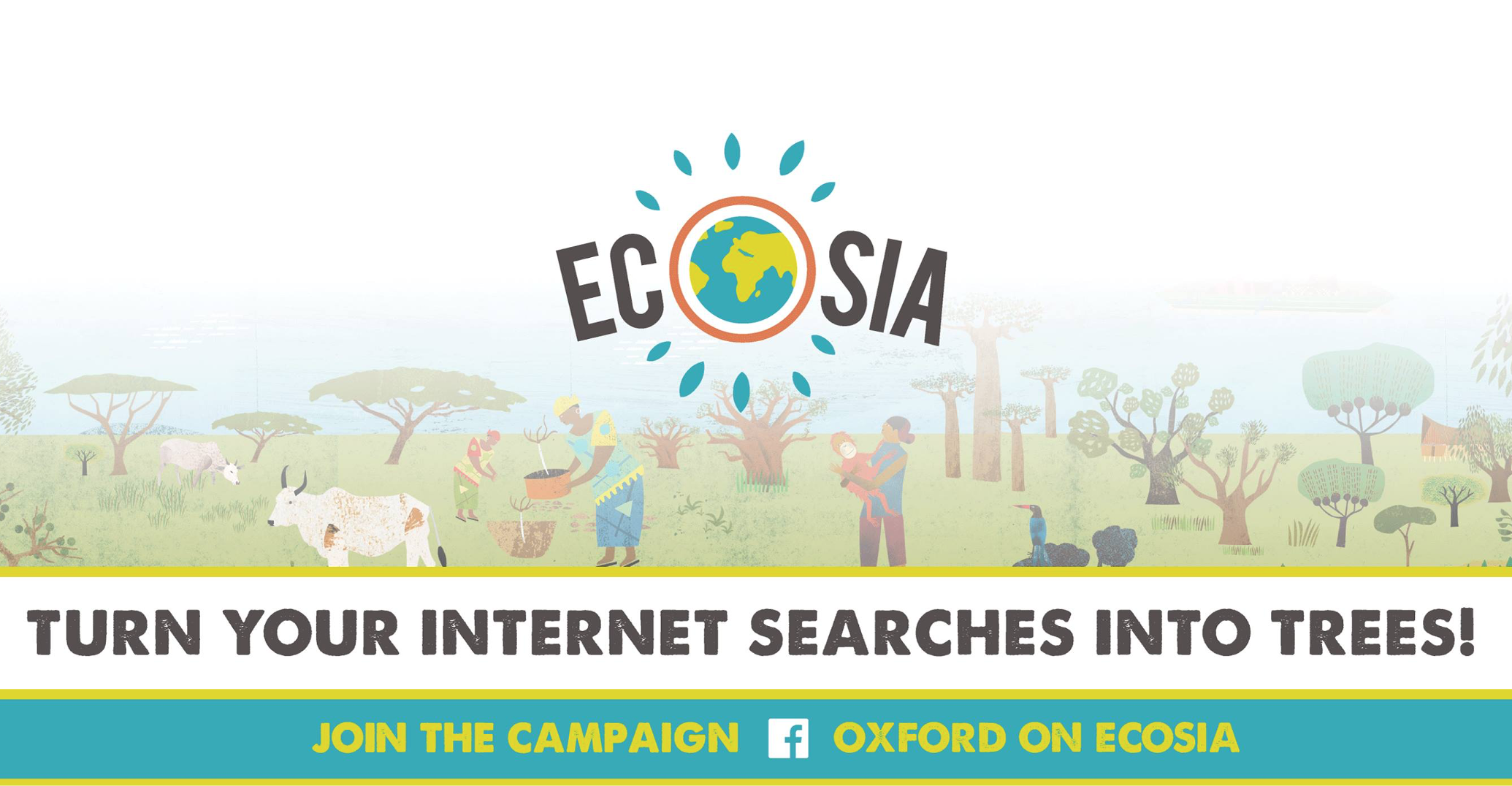 Image Description: Ecosia logo on background of trees, cows, and farm workers. Just underneath is the motto: “Turn your internet searches into trees!” on white background. Underneath this: “Join the campaign | Oxford on Ecosia” on a turquoise background.

Oxford on Ecosia is a growing group of students campaigning to make Ecosia the default search engine across Oxford’s campus. Their “campaign aims to promote Ecosia among the university’s student body and lobby IT to make the easy switch away from Google”. Their campaign suggests that this “is a simple, everyday action that can help us make a positive change for the planet”. You can change to Ecosia and support this movement here.

Oxford on Ecosia is part of the Ecosia on Campus global movement. This is a student-led movement at over 280 universities around the world. Over 20 universities have officially adopted Ecosia, including the Universities of Glasgow, Bristol, and Leeds, amongst others in the UK. They aim to raise awareness “through discussions and social media” and saw “a tremendous positive response” during the Freshers’ Fair.

Oxford on Ecosia state that over 140,000 trees have been planted by 20 universities who have set Ecosia as their default search engine so far and “want Oxford to show that it carefully considers its environmental impact and is willing to change”. They note that Ecosia gives 100% of its profits to “fund reforestation projects and green initiatives (e.g. solar power plants)”. It is also a certified B Corp and publishes publicly available monthly reports regarding expenditure.

So far, Ecosia has planted over 130 million trees worldwide and is carbon negative due to renewable energy servers. Each search request removes about 1kg of CO2 from the atmosphere. In addition, it does not create personalised advertisement profiles, sell data to third parties, or use external tracking tools.

Nell Miles, B.Sc. Biology, said: “Setting Ecosia as the default search engine at Oxford is such a simple change for the University to make, one that costs nothing but that creates incredible positive impact for the environment. Beyond the trees planted directly from University of Oxford searches, the move would signal to institutions across the world that it’s time to take action in all forms to prioritise and protect the environment, and could inspire widespread change with exponential impact.”

Fred Henderson, project coordinator at Ecosia commented: “Universities are some of the most forward-thinking institutions in the world and their student bodies are full of vibrant, creative young people who are determined to make a positive impact on the world. That’s why traditionally we’ve seen such a big take-up of Ecosia by students as it aligns with their values to make a difference. Ecosia on Campus is a brilliant way to challenge a university’s thinking around the tech it uses and advocate for a platform that is fighting the climate crisis in a clear and tangible way. We’ve been delighted to support 20 universities and over 300,000 students so far with Ecosia on Campus and look forward to planting more trees thanks to the searches of students around the world.”

One student at Oxford University, not part of the campaign, said: “I already use Ecosia and it is a really easy way to make a difference. For me, it is as much about sending the message that there are people out there – students very much included – who are willing to give up certain things in order to help the planet as it is about planting trees. It’s very symbolic. Oxford considers itself to be a leader, and universities across the UK and the world look up to it; so this is the perfect opportunity for Oxford to make a difference and lead the way.”