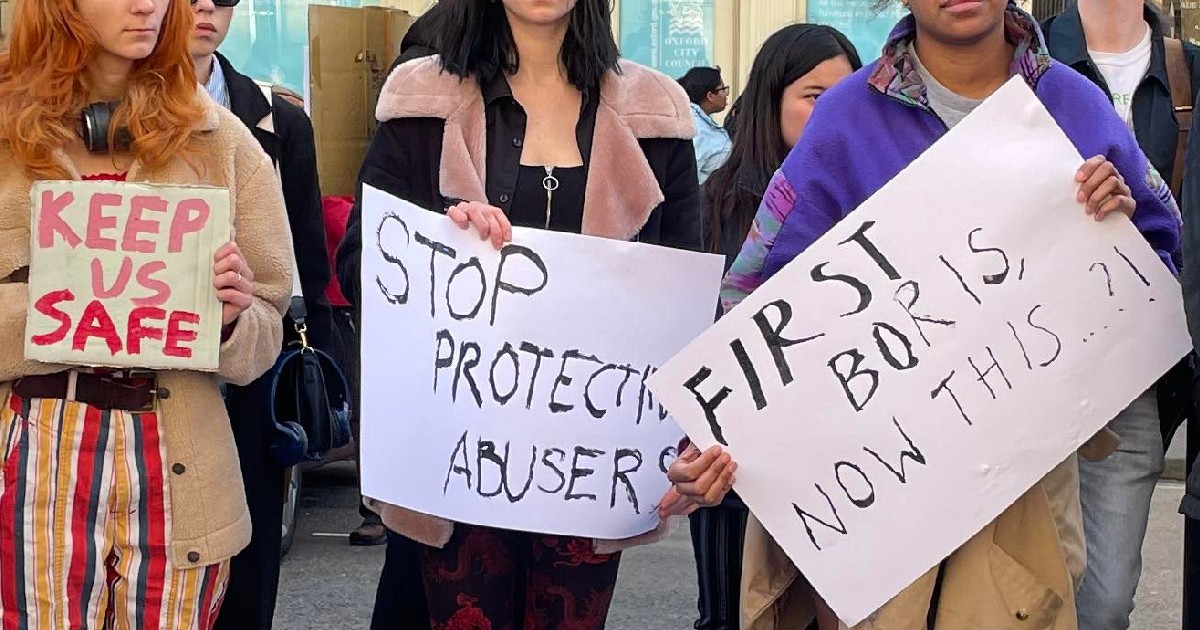 Image Description: some of the signs at the protest.

Students protested outside Balliol College last Sunday after a recent Al Jazeera investigation criticised the Decanal team for their handling of a sexual assault case within the College.

Students chanted slogans including “Balliol College protects abusers” and “Balliol College do better” during the protest, which lasted for approximately two hours. The chanting could be heard from the front quad of the College, and students were trying to persuade passers by to sign their open letter, which was handed to the College on Monday. The group sent the letter with 990 signatures.

Students at the protest spoke to The Oxford Student, emphasising how important they thought the protest was, and that they hoped that it would encourage the college to take action.

One student commented: “I think we’ve had a good turnout. Given that Balliol Community for Safety started really recently, I’m really impressed with how many people turned out. I think it’s very important that you do make it public, and I don’t think there’s been enough publicity about this. It’s kind of embarrassing that it has taken this long to become so public.”

Another student said that “it’s especially important to have things like this because it has become very clear that Balliol won’t listen to anything else. Obviously that’s bad, but they only listen if it’s clear that it will affect their reputation, which this will.”

The Balliol Community for Safety commented on the protests, thanking those who turned out to support the campaign and highlighting the current lack of communication from the College.

“We first of all would like to thank all those who have already signed our Open Letter, and attended the protest on Sunday to stand firmly in support of survivors and show Balliol College that their continued failure to appropriately address the allegations raised by the Al-Jazeera Investigation is unacceptable.”

“So far the only communications we have received from the Master in regards to our campaign have been hidden in a weekly newsletter, in the midst of discussions of Bonfire Night Celebrations and Lemony Snicket. Such references attempted to frame students as blowing the severity of the case out of proportion, instead assuring students they are taking due action, when in reality they have been aware of this case for almost two years and have only now taken action to consult the student body in light of the videos release. Moreover, they alleged our campaign to be part of an unconstructive public debate in which the College does not want to participate. Yesterday’s protest however, shows that the aims of this campaign are the antithesis of unconstructive. Swathes of students feel unsafe, unprotected and harmed by the current systems: and that must change, and despite their assurances of action and reform, Balliol College’s response simply is not good enough.”

“The cross-collegiate response to both the Open Letter and the protest, as well as the support of the SU President, It Happens Here, WomCam, FemSoc, OxWib and OULC demonstrate that our campaign has a base of support which acts as overwhelming evidence that Balliol College must take action. We are handing in the Open Letter to the Master on Monday evening and look forward to her response. Follow us on @balliolforsafety on Instagram for further campaign updates.”

Harriet Lester, whose story is covered in the Al Jazeera investigation, also spoke to The Oxford Student.

“So we’re here to protest due to the Al Jazeera investigation, and College’s response to the investigation and how they have dealt with sexual assault and sexual harassment cases. I am personally involved because I was amongst the stories that were spoken about. Essentially the College refuses to investigate any sexual assault claims, using their non academic disciplinary proceedings, in particular paragraph 2.7.”

“We’re protesting the fact that College has this ability to refuse to investigate any sexual assault or harassment on campus and that they will use this in order to remove their responsibility to survivors or to keep people safe.”

“I also personally think that the college has acted really irresponsibly with how I was treated as a victim. I was told to think about the man’s future, I was belittled, and I wasn’t treated with respect. I was put through a traumatic 5 month long investigation period, when I was told that I wasn’t allowed to tell anyone what had happened to me, so I had to go through that alone. At the end of it College pulled out paragraph 2.7 and said they weren’t going to do anything about it.”

“They’ve never offered me any support apart from to talk to the Welfare team, and that’s the problem. There’s no real support for victims and a lot of the time the people you are asking for support are the people who are victimising you. This is the problem with the College; they are acting very irresponsibly and recklessly when it comes to the lives of victims and people who speak out, and that’s why everyone’s scared. The students are terrified because they’ve realised that there isn’t really any safeguarding at Balliol, and that the people who are in charge are grossly incompetent.”

“They haven’t responded to this in a responsible manner. And they’ve taken zero responsibility. We’ve had no apologies at all and that just shows that they don’t know how to deal with situations like this.”