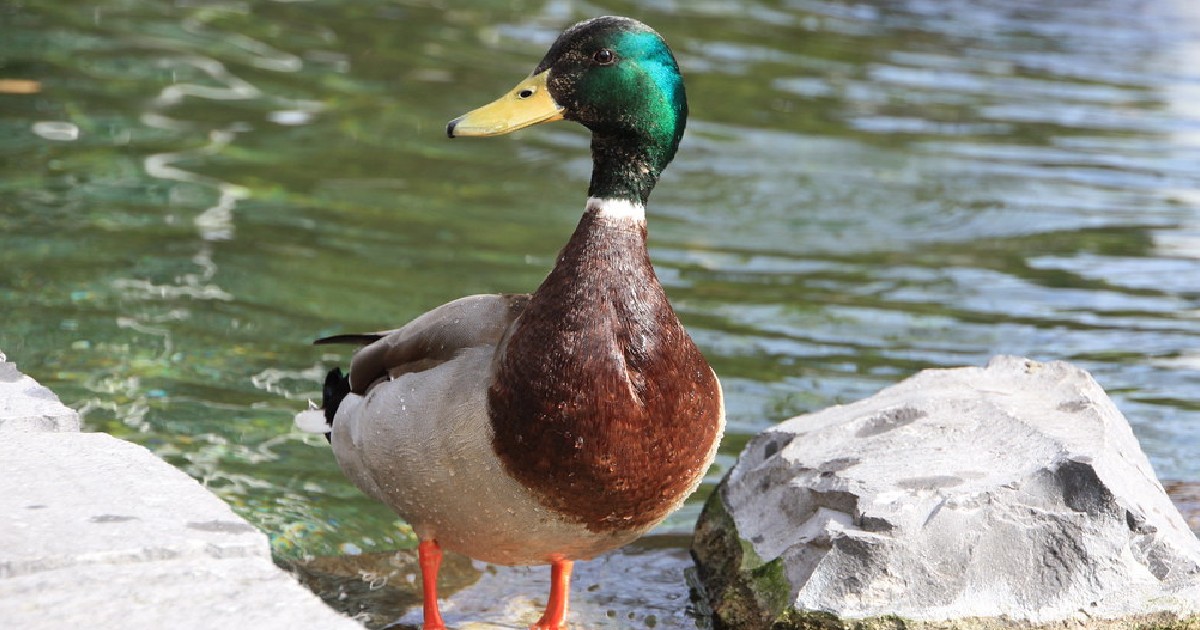 Image Description: a duck standing on a rock in front of a body of water.

Some of us at the Oxford Student have long suspected the presence of a mysterious force pulling strings and watching our every move from the shadows. While it has been commonly suspected that birds are government agents, investigations have tended to focus on city-dwelling birds such as Colombidae and Corvids. Ducks, having a more aggressive but also much more confined physical presence across campus, have generally evaded suspicion.
While we had originally planned to report solely on the recent and rapid growth in influence of the Facebook/Instagram account OxDuck, our seemingly innocuous interview with the mysterious group, upon further inspection, raised doubts internally that there may be more to Oxford’s ducks than previously thought. We now believe not only that the ducks hold incredible sway over the workings of the University and its powerful alumni, but also that it is moving to further conslidate its hold with OxDuck, a soft-power campaign.
Our Editor-in-Chief was able to identify, track down, and interview the human representative of this powerful and shadowy group. Since her interview, bizarre coincidences have repeatedly hindered the writing and publishing of this article. Despite these dangers, we present below the original report and interview. Intermittent analysis of the clues we believe Madeleine left us is provided in Italics.

At an undisclosed student political society event, a friend of mine revealed that they were in fact, the founder of the Facebook and Instagram phenomenon, OxDuck. For those of you not in the know, OxDuck is a place where lovers of ducks (and not geese or swans) gather to share images of Oxford ducks doing Oxford duck things. It has 1.1k likes on Facebook, and it shares duck content on the daily. Here’s how the conversation went. -We now believe this wholesome tone may have been forced, perhaps even under threat. Madeleine has not been acting the same since the interview.
MR: So I’m talking to the Founder, and current Chief Executive of OxDuck! Tell me, where did the idea for the page come from?
OxDuck: I just really like ducks. I noticed that there was a gap in the market for Oxford duck-related content, and decided to fill it. We had Oxfess, we had Oxlove, but where were the ducks? People need to be happy: you go on Oxfess and you want to cry because of the miserable content. It’s just awful. Most people aren’t getting Oxloves written to them, but people can see ducks.
MR: What’s your favourite kind of duck?
OxDuck: Mallard.
MR: Why? – Short, snappy responses indicate duress.
OxDuck: They’re shiny, they’ve got a bit of green and green’s a pretty good colour.
MR: How much engagement has your page had since it launched?
OxDuck: We’ve got upwards of 2,000 engagements every week. We usually post every day – that’s what I aim for. Sometimes I just forget.
MR: Who submits ducks to your page? How broad a range of people are sending you ducks?
OxDuck: I think we’ve had submissions from most colleges. We’ve had some from Worcester, Christ Church gets a lot because it is so big, and so does Magdalen. – Curiously, OxDuck names some of the most prominent (and well-endowed) colleges at Oxford as submitting to duck influence.
MR: Do you ever feature birds that are not ducks on your page?
OxDuck: No.
MR: Favourite ever submission?
OxDuck: My favourite submission? I don’t know off the top of my head. There’s a lot of good ones. There’s one with a duck coming into a punt and biting someone on the finger. That’s quite a fun one. – In a classic rhetorical manoeuvre, OxDuck downplays the urgency of the security threat posed by ducks.
MR: Have you ever been attacked by a duck? – Admirably, Madeleine continues to press on this clearly sensitive subject.
OxDuck: I have not, I am a friend of ducks. – OxDuck reveals their privileged position among the ducks and appeals to our desire to achieve the same sense of security in the face of the anatine threat.

Thus concludes the short yet incredibly tense interview and report we received. SInce the interview, we have experienced constant obstruction of its publication. From persistent technical issues even as I write this article right now, to heightened and constant surveillance by ducks throughout my day, it is clear that some powerful force does not want this piece to be published. This is not even mentioning Madeleine’s noticably different mental state after what should have been a lighthearted, wholesome interview, a strong indication that the tone of the interview was forcibly fabricated.
I have resorted to working on this publication in the middle of the night, and have kept the original unincendiary title in hopes of reducing unwanted attention.
In any case, Oxford is no stranger to political, intellectual, and scientific powerhouses. The University has existed for nearly a millenium, during which time it has produced countless prime ministers and nobel laureates. But throughout its entire existence, prime ministers and nobel laureates alike have bent to the will of the true seat of power in Oxford – the ducks. And, unknowingly, so too have we all lived oppressed under their webbed feet.