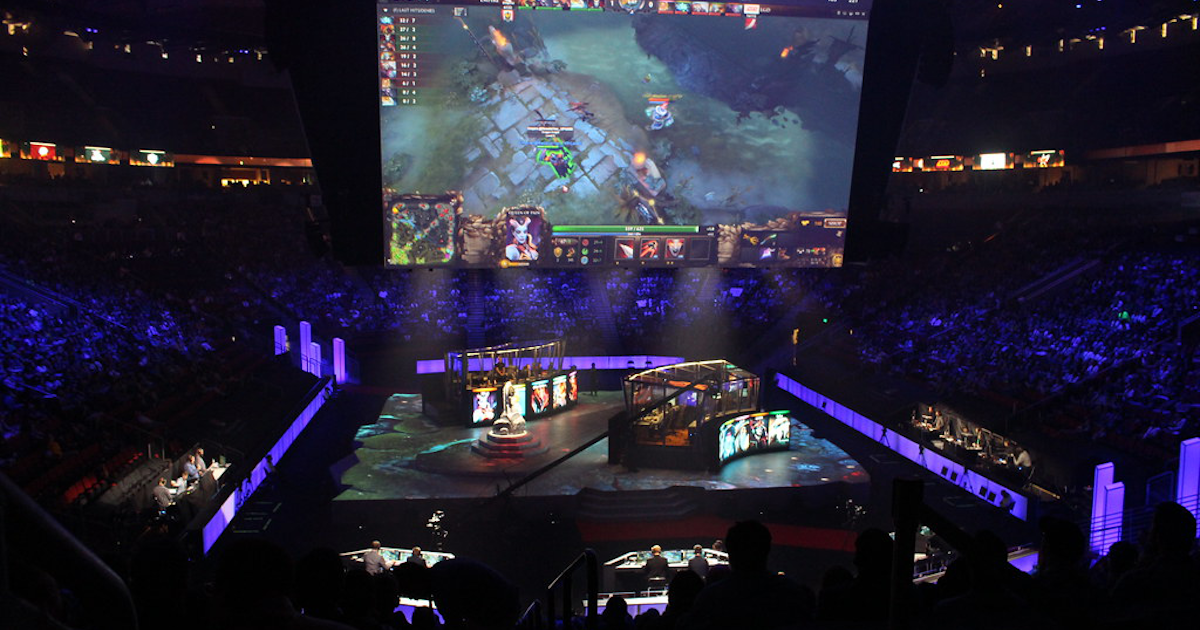 Image description: ‘The International 2015’ arena from an aerial view with ‘Dota 2’ on display

Over the course of the week beginning 11th October, 18 teams battled it out for the most lucrative prize in esports history at the 10th edition of Dota 2’s world championship: The International 2021. After a thrilling best of 5 Grand Final, Russian underdogs Team Spirit beat the favourites, PSG.LGD from China, 3-2. Team Spirit had also defeated the reigning champions 2 tournament’s running in OG on the way to the final.

Dota 2 is a MOBA (multiplayer online battle arena) in which two teams select heroes with various abilities and functionalities and play to destroy the base of the other team. Professional Dota players need excellent tactical brains in order to draft effective heroes, manage their team’s economy, and control the space of the map effectively. They also need excellent mechanical skills including speed and expertise in order to effectively use their heroes’ abilities to win fights. Dota is distinct from other MOBAs such as League of Legends for having a much greater focus on the former set of skills than the latter.

The International is a world-renowned tournament started in 2011, when its organisers shocked the world by offering a prize pool of $1,600,000 – completely unheard of in esports. This year the prize money for The International was generated through a ‘battle pass’ Dota players could purchase giving them in-game cosmetic perks, access to a ‘fantasy TI’ and a levelling system which rewarded those who played lots of Dota over the period. As TI10 was meant to happen in 2020 before COVID complicated things, the battle pass period was much longer, allowing the tournament to accrue an even larger prize pool. Only a quarter of the battle pass revenue goes to the prize pool, with Valve, the tournament organiser and game studio behind Dota 2, making a tidy profit even after booking stadiums and flying players out. The prize pool ended up totalling $40,018,195, with $18,208,300 going to the champions – the largest prize pool in esports history!

The tournament began with a round-robin group stage of 2 groups of 9 teams, each team playing each other twice. The top 4 of each team earned qualification to the upper bracket of the tournament – meaning a single defeat only knocked them down to the lower rather than out of the tournament entirely – whilst the loser of each group was eliminated. Whilst there were many popular and dominant strategies employed, a noteworthy one was the value of the hero Magnus at disrupting the enemy team during fights. Magnus has several abilities which move enemy heroes around, and one of which – Skewer – can (with the proper items bought) completely isolate your enemies’ vital heroes to be picked off by the rest of your team. In the Grand Finals, this strategy was successfully employed by the offlaner of Team Spirit, Khalilov ‘Collapse’ Magomed.

Valve uses the tournament to advertise its game and get people excited about Dota, at it has certainly reawakened a spark in me after a long absence.

Valve uses the tournament to advertise its game and get people excited about Dota, at it has certainly reawakened a spark in me after a long absence. To encourage more engagement, Valve gathers Dota 2 content creators as tournament talent, who do an excellent job of commentating on games, interviewing players, and producing content for between games. Valve also makes big announcements at TI; this year the largest was the introduction of a hero Marci, taken from the first series of the Dota 2 Netflix anime Dragon’s Blood that started this year, as well as the trailer of a second series to air January 2022.