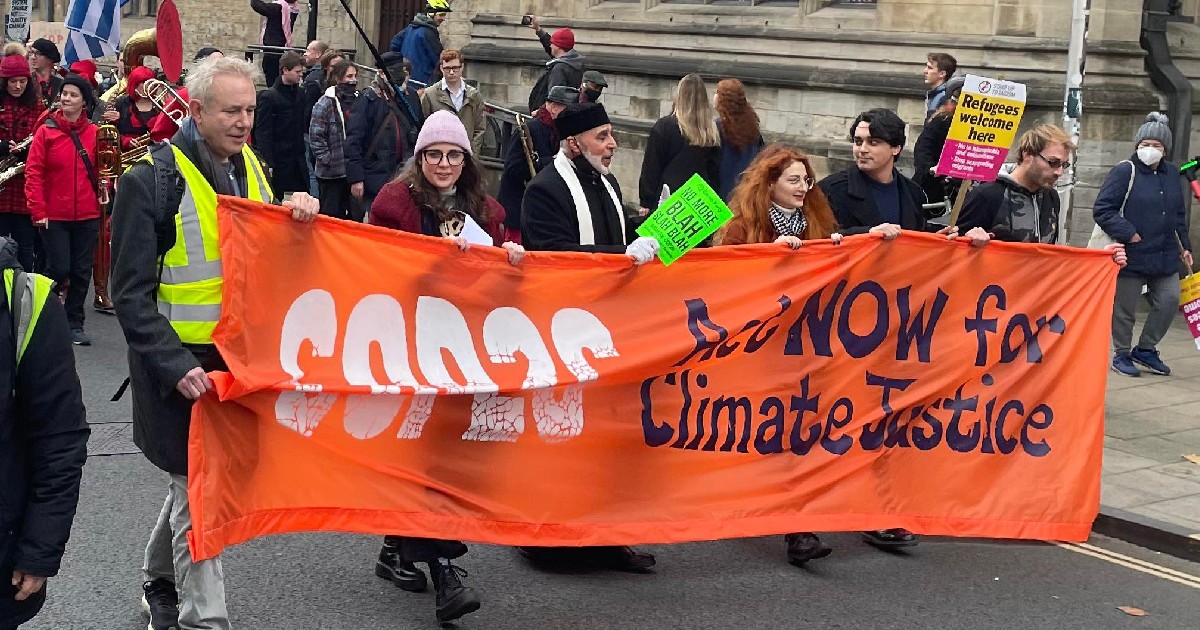 As is usually the case, the protest’s effects were felt before it could be seen. Longwall Street was filled with the cacophony of car horns blaring, a steady drum beat and the faint hum of brass instruments. Once on the High Street, the source of this noise could be determined: Thousands of people had taken to the streets of Oxford to protest for ‘Climate Justice’.

It was a cold late Autumn afternoon on Saturday 6th November; however this seemed to have no effects on either the turnout or the spirits of the protesters who showed up for what Extinction Rebellion Oxford describes as ‘Oxford’s biggest ever climate march’. The crowd was a varied blend of local residents, hardcore extinction rebellion protesters, and university students all coming together to support the message.

There was undeniably anger and a demand for action in the air, with shouts of ‘No more Blah Blah Blah’, and ‘We demand climate justice’ being the prevailing chants from the crowd.

Much of this anger was stirred by the 26th United Nations Climate Change Conference (COP26). This had been held in Glasgow over the last week. Particular focus was drawn onto the world leaders attending being ‘all-talk but no action’.

However, this was mingled with a feeling of hope. Signs saying ‘Act now for climate justice’, and ‘Be part of the solution, not the pollution’ suggested the crowd did not think that it’s too late for change to be made.

its unfair to ask countries in Africa to restrict their economy and suffer the consequences of climate change, while the countries that actually caused it aren’t paying for it

When asked about what they believe climate justice is, one of the lead protestors said: “What climate justice means to me is the fact that lots of people worry about emissions in India, and they worry about rising emissions in countries in the third world, but the problem is actually the countries that are responsible for putting us in this place in the first place, are the countries that have historically emitted the most carbon.”

“Sure, looking at the current emissions of countries like China and India is important, but actually the countries that made themselves rich by putting us in the situation we’re in are the ones that bear responsibility for it. So its unfair to ask countries in Africa to restrict their economy and suffer the consequences of climate change, while the countries that actually caused it aren’t paying for it; so climate justice is about recognising that most of the principal suffering is going to be felt by countries that didn’t cause the problem, and it’s really countries that caused the problem that have got to be the ones to foot the bill.”

In response to the question of what the University could be doing better to support climate justice, one Oxford University student at the protest said: “Stop accepting pay-outs. At the end of the day, this university is rich enough without this money. So why should this fund them when surely if they take enough action they can make more money doing something about this, than actually just getting these donations from fossil-fuel companies?”.

Another said: “Funding more research, because Oxford is not doing enough. They have enough resources, we have all the facilities, we are not doing enough to fund research.”.

She continued: “Also, supporting students, because we get no support when trying to organise activities like this. We get absolutely zero support from the University, and Colleges do nothing.”.

The protest was peaceful and, despite its size, well organized. For example, when met by an ambulance responding to an emergency, the crowd swiftly moved off the road and caused no delay. There was significant police presence around the protest, but there seemed to be no intervention required.

The crowd marched up High Street, down Cornmarket Street, before finally congregating in Broad Street for a series of speeches from activists.