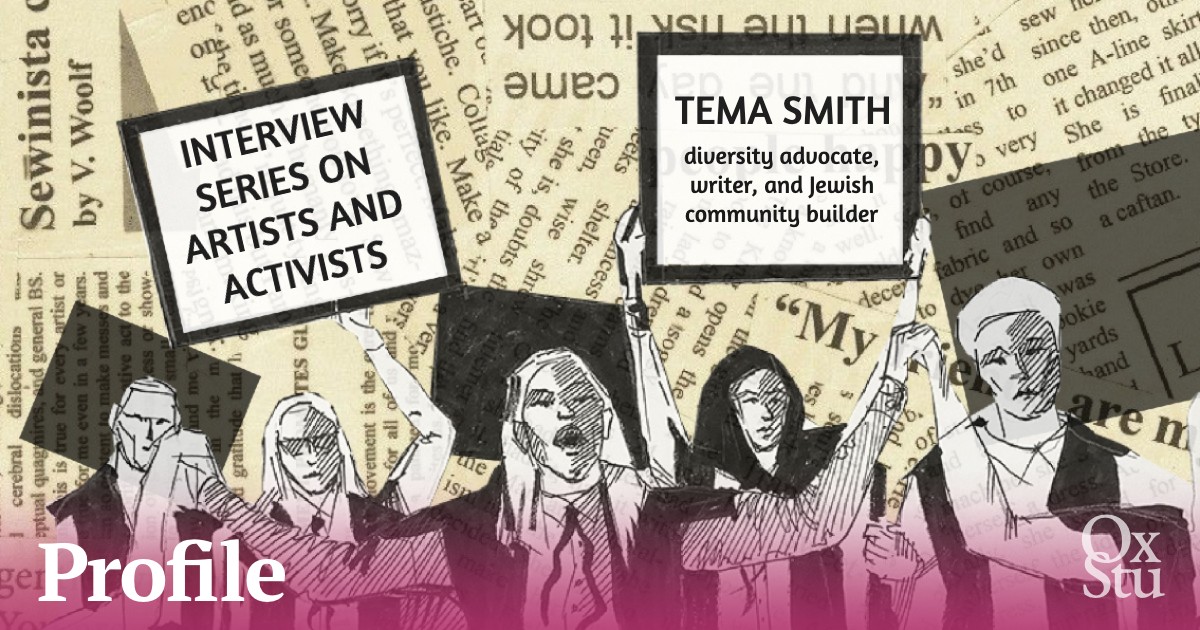 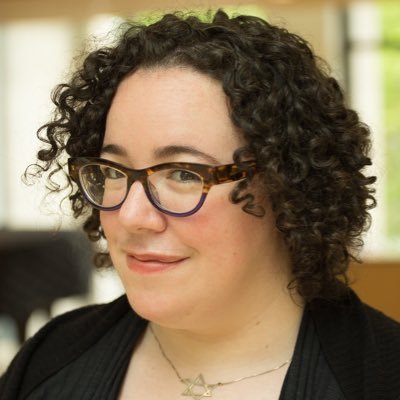 Some time in March of 2021, I had the opportunity to speak to Tema Smith, who describes herself as a “diversity advocate, writer, and Jewish community builder.” My conversation with her took place via Zoom (as all pandemic-lockdown interviews happen to take place). From the comfort of my room in Oxford, and hers in Toronto – we had an insightful discussion on what Tema thinks it means to be Black, Jewish, and her experience of working within different communities. Tema introduces herself by telling me more about her family, which happens to be integral to her involvement with community and inter-generational work.

“I live in Toronto, Canada, which is my hometown. My mother’s parents were born in Canada, and they’re Jewish. Both of their families came here in the 1920s. And my mum was born and raised here. My father was born in New York, and his family had recently emigrated there from the Bahamas. He’s the second youngest of ten kids in a big Bahamian Black Catholic family. I have a younger brother and we grew up sort of in downtown Toronto, a really multicultural city. I’ve been a Jewish professional for 12 years, I started in a Holocaust education project. After that was over, I worked in synagogues for almost eight years. After that, I’ve been in my current line of work, as Director of Professional Development, for 18Doors, where we work with Jewish organisations to make them more inclusive of interfaith families. I’ve been doing that for a year and a half,” she says.

“This is interesting, because I noticed that whenever I speak to or interview people of colour or those from mixed-race backgrounds, there is always an element of familial involvement and upbringing, that isn’t present as much, or as important, when I speak to white people about their work, for example. I don’t know if this is a coincidence, but why do you think this might be the case?”  I continue.

“Yeah, that’s a really interesting question. I’ve never really thought about it. I guess, for me, specifically, so much of my work is tied to the things that I didn’t have access to – and it is tied to explorations of my own identity. But also, I’ve started to joke a little bit about how working in anti-racism, equity, all of these fields is like my family business,” she laughs.

“My dad, that’s what my dad did professionally, and still does. He’s semi-retired. But that’s what he does now, as well. And my mother is a therapist, she works with loads of racialized people, and her research was on how white mums make meaning of race in mixed-race families. So like, basically, both of my parents, like my sort of development as a professional in this area, is so closely tied to the way that I grew up, and the conversations that we had, and how they taught me to view the world and be myself… I wonder if there’s a degree of thinking about how this idea of the personal being political. For me, that feels so real, that I think it’s silly to try and detach ourselves (and our origins) from the work that we do.”

I think that is why intersectionality is so important. Even if I were a darker-skin older sister, I would still be looking out for him as a young black boy. We went to a really multicultural school, so there were tonnes of black kids. It’s not like we were the only black kids, but we were the only Jewish kids, so I think this is really an important part of the conversation.

“In the wake of last year’s Black Lives Matter movement, you wrote an article and addressed concerns about your younger brother, especially on growing up as Black. Do you think any element of gender, or you being light-skinned/white passing, also plays into this, since there were some of his experiences that you could not relate to?” I ask.

“I think all of that is at play. My brother’s darker than I am… people who know mixed Caribbean people, generally speaking, would know that I’m mixed, but if you don’t, I’m seen as ambiguous and people just assume I’m white. Whereas with my brother, there’s no ambiguity, he’s very obviously Black. Because I’m also older than him, there were a number of pieces to it… Some of it was just standard, like, ‘look over your younger brother’, like any family would with the older sibling being in charge of ‘getting the younger sibling home from camp’, kind of stuff,” she laughs.

“But also, there were very obvious instances where race was a factor. For example, when my brother and I had the same teacher, three years apart. She was lovely to my mum, when I was her student. Then she met my brother, and instantly, her face changed. Just really obvious stuff like that. My brother and I are very different people – he was an actor, dancer, a trained opera singer. I was the socially awkward nerdy kid. He was also good at sports, so maybe a lot of that was very gendered. But my mum was a parent who understood coded language, and there was an incident where she marched into the principal’s office and demanded the school to remove this line on my brother’s report card that said ‘all he cared about was going out for recess.’ … That was a hundred percent – the comment on his report card was about race… When I was trying to write that piece, it was a really hard piece for me to write, and it took a really long time. But the memories that I didn’t explicitly remember being about race, suddenly clicked to me… I think that is why intersectionality is so important. Even if I were a darker-skin older sister, I would still be looking out for him as a young black boy. We went to a really multicultural school, so there were tonnes of black kids. It’s not like we were the only Black kids, but we were the only Jewish kids, so I think this is really an important part of the conversation.”

“You might have probably answered this already through everything you just told me, but you describe yourself as a ‘Jewish community builder.’ Why did you choose that specific label?” I question.

“I was always curious about Judaism, but there wasn’t a safe space for my family to explore that. Among those reasons were the fact that we were interfaith and interracial. When I got to my mid-20s, I got really curious about it and met people who introduced me to this organised Jewish life. I really wanted to figure out ways to provide access to people like me and my family, and to build spaces that were intentionally welcoming to families like mine. When you’re a minority within a group, you usually look for other people like you, first, and I found nobody locally. So it started with trying to figure out what that looks like, and then the rest of it kind of happened by accident,” she smiles.

“I first started working at a synagogue when my job contract ran out, then I sort of got into that work more and more. The parts that really spoke to me were about creating an intentional community for people, and helping people find community within each other. A lot of the community building I tried to do is also on social media, really informally. Like, I love the people I’ve met on Twitter and the opportunities that I’ve had, and the communities that I’ve built.”

I ask her about how she thinks the BLM movement of 2020 has affected the Jewish community in Canada/North America, and across the communities she is involved with.

“I think the Jewish community previously was sort of very attached to a vague idea of supporting racial justice. In the civil rights era, there was a lot of heavy Jewish involvement, a lot of very prominent Jewish voices working for civil rights, etc. It is assumed that Jews in the US vote for the Democrats, since they’re ostensibly the party that’s thinking about this stuff a lot more. Thinking of equity as a Jewish value, I think, has been there for a long time. But I have a set of theories on why this current (2020) moment galvanised. It’s not just the Jewish community – I mean, America was on fire, literally. I think the pandemic fed it, and at that point, it’s been almost four full years of Trump and growing tension. Also, the particularities of the George Floyd video really upset people in a different way. For me, that was really hard because my father is from Staten Island, where Eric Garner was murdered in 2015. Staten Island is where my dad had been harassed by the police growing up as a black kid. And like, I know where Eric Garner was murdered, it’s walking distance from where my aunt lives. So for me, that was very personal… But also, just people being scared with the rise of anti-Semitism, and racism, and I thought, that all of this – that it was the perfect moment for there to be a storm,” she responds.

I really wanted to figure out ways to provide access to people like me and my family, and to build spaces that were intentionally welcoming to families like mine. When you’re a minority within a group, you usually look for other people like you, first, and I found nobody locally. So it started with trying to figure out what that looks like, and then the rest of it kind of happened by accident.

“But the one thing that I talk about a lot now is standing up for racial justice as a Jewish value – standing against systemic racism, trying to unpack all of that and legislate it away. All of that is extremely valuable work. But I think, for me, the Jewish community should also be looking at how race plays itself out from inside. In some ways, it is easier to look outward. There are so many pieces, and all that stuff won’t be solved if the community doesn’t also look inward,” she emphasises.

Before our interview draws to a close, I ask her about how she has reflected on her involvement in community-building throughout the years, and if there was anything else she wanted to share.

“I love to end on a hopeful note, so one of the most encouraging things to me as a part of the Jewish community is seeing how people 10 years younger than me, are so much more racially diverse. We do have a changing community, and it’s so exciting to see this leadership. It keeps me going, because it’s concrete, who I am building for now.”

“In terms of my own work, I guess the biggest thing I would say is for people to check out my writing. I also try to post the talks I give on my website. Also, for people who are Jewish and who are connecting in those ways, check out the work of 18Doors! We have so much for so many kinds of people who want a sort of ‘accessible’ Judaism. And then obviously, follow me on Twitter… for dog pictures!” she laughs.

More information about Tema Smith and the meaningful work she does can be found on her website, https://temasmith.com/ . She has also recently been featured in ‘Periphery’, a short documentary on Jews of colour in collaboration with the Ontario Jewish Archives and No Silence on Race. The documentary, accessible to all viewers, can be found here.