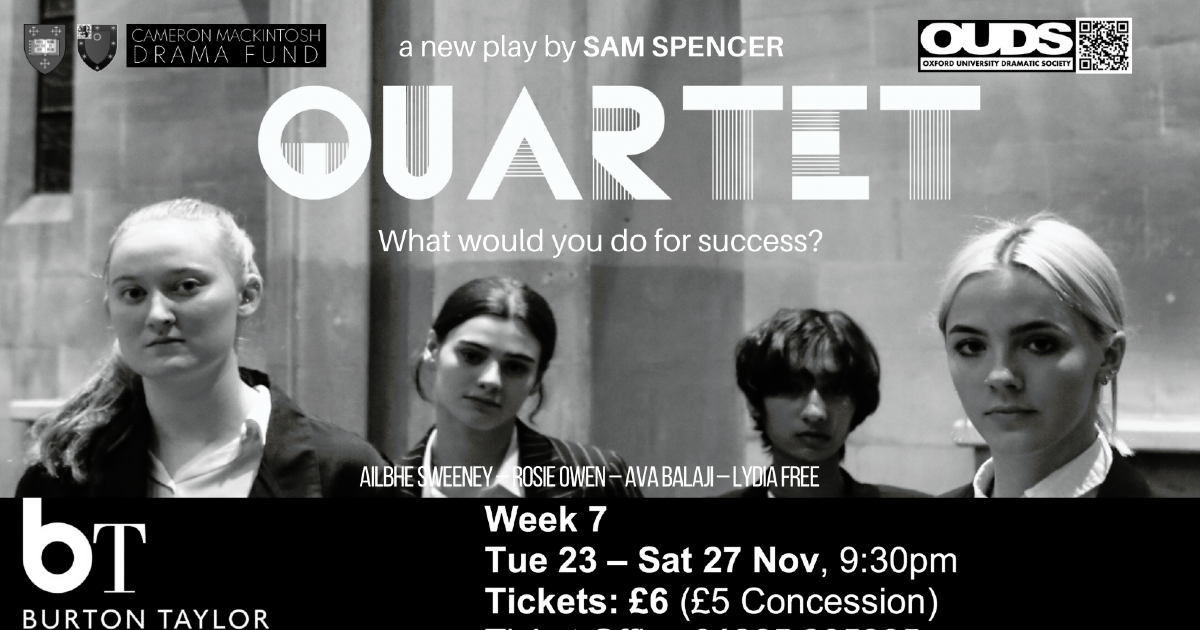 Image Description: four students who are involved in a black and white photo with the word “Quartet” in the background.

Sam Spencer is the writer behind a new production set after the December 2019 election called ‘Quartet’. Jessica Kaye sat down with him to talk writing during a pandemic and the challenges and joys of putting on in person theatre.

I start off by asking Sam a little bit more about what the play is about:

“So, Quartet, it’s December 2019. Just before the election, just before all the events of 2020 happen. And there’s a group of four friends in their last year of school and they’re very ambitious and successful people that are looking forward to the year ahead, that they’re about to have, all the amazing things that they get to do. But then one of them has written a play, and they start to read the script of that play. Then they believe that it is filled with all these truths and secrets that will threaten to destroy the lives and the futures that they’ve created for each other. It’s an hour long drama with some good comedic touches to it, because there’s a lot of looking forward to 2020 and the kind of hopes that people had for 2020 being like an echo of the 1920s. Again, with the script, it has a lot of these sort of 1920s touches, like we’ve incorporated bits of 1920s style jazz, there’s jazz and dance steps from that time. So it’s full of this sense of the dramatic irony of this optimism and happiness that, as an audience, we know isn’t quite going to happen.”

Wanting to know more about what inspired this and how it came to Sam I ask about the nature of the writing process and how he approached the idea.

“I started writing it actually in Hilary of my first year, so that was in 2020, then Trinity term when we were locked down and we were sent home, kind of as my way of kind of getting through it. Every morning for an hour shift I would just sit and write. So it’s quite an old one, but I kind of put it on the back burner for a little bit. So now, a year and a half later, it had arrived in the world and it is being staged.”

The play has been in the works since the start of 2020 and so that begs the question: how did lockdown change Sam’s writing process and the content of the script?

“Over the last lockdown I did this thing called the black lives playlist, which is up on YouTube. And that was more influenced by lockdown because that was all over lockdown. But if anything, Quartet really didn’t change, it kind of stayed intact. It was only after lockdown when things changed and when we started thinking okay, let’s actually now put it on stage where we lent back into the tactility so that there was more of that dramatic irony. All the things that we kind of lost over lockdown where we couldn’t really touch each other go to each other’s houses and all of that sort of stuff. The script actually doesn’t mention anything lockdown related because it’s set before all of these things, it just kind of has an awareness that it like implicitly the audience has an awareness that these things are about to happen.”


As this is Sam’s first time putting on a play that will be done to a live audience I have to ask him about the all the good, the bad, and the ugly that comes along with in-person theatre.

“You kind of start to realise all the little tiny things that really go into production. I spoke to other actors and things recently who have commented that they’ve only just realised that by the time that they get to a script and get rehearsals that it’s already halfway through the production process. But it’s actually been such a good learning curve in terms of doing these things now to just sort of realise what all those little things are and anything that can go wrong, even if it does, you realise this is how we’re going to fix it.”

He is also keen to emphasise the impact of a live audience and, as a writer, seeing the effect your work has on people.

“Actually having an audience that have those live reactions, you really miss. I think what I’m really looking forward to about this is to actually have that palpable audience reaction, like I’m really hoping, we get people laughing and people having shocked gasps. There’s this one moment in the middle which I’m really hoping to get like an audible shocked reaction, so I’m just going to be sat there and waiting. It’s jam packed! Not jam packed in the way that it’s ridiculous and ludicrous and what the hell is happening. It all makes sense. But it was definitely written to be dynamic and something for the audience to be hooked onto.”

The actors that are going to be bringing this script to life are, of course, key to eliciting these reactions that Sam is so keen on seeing in his audience. I ask how finding these actors and getting to go through the process in person worked for him.

“So exciting! When the play was written, it was written for four male characters just because I was thinking of the friends that I’d had at school, and that was kind of who they were. So it just kind of felt that immediate connect. But first of all, we decided that we were just going to open up to actors of any gender to do it. Then as we got through the auditions, we just kind of realised actually, what we really want is like an all female cast to do it. And not just for a statement of oh, we’ve got an all female cast. Isn’t this fantastic? But genuinely, because they were fantastic.”

I’m also interested to see how the crew has impacted the production of this play and the role they’ve played in bringing it to life alongside the actors.

“The process has been great! Our producer Nathaniel, I think he’s becoming my favourite person on the planet. Our director and assistant director, they are both fantastic and an absolute dream to work with. We’ve got an incredible composer, Maddie Lay, her music is genuinely fantastic, I’m so excited for it.”

Quartet is on at the Burton Taylor Studio 9:30-10:30 pm Tuesday 23rd November to Saturday 27th November.

More information can be found here.