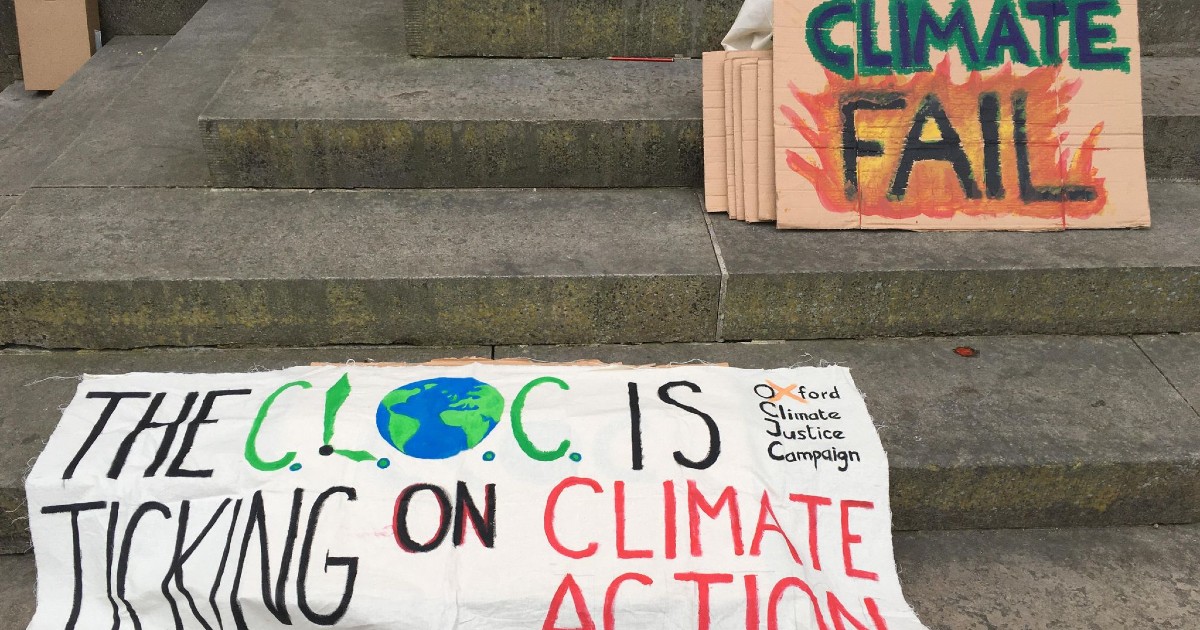 Oxford colleges get “U” grades on climate action

Image description: Signs with slogans on including “Climate Fail” and “The CLOC is ticking on climate change”

Campaigners unfurled mock A-Level certificates in a rally outside the Clarendon Building on Friday, giving a failing “U” grade to 33 out of 37 Oxford colleges and halls. In the evening, the activists used projectors to display colleges’ grades on their buildings.

Colleges were scored by the Climate League of Oxford and Cambridge (CLOC) on their achievements and ambitions in decarbonization, divesting from fossil fuel companies, refusing gifts and donations from the fossil fuel industry, and establishing environmental governance processes.

Oxford SU President Anvee Bhutani said, “Most colleges have received a U, and the best only a C in our ranking, showing that their climate ambition ranges from poor to non-existent. This is not only unacceptable, but deeply hypocritical.”

The campaign produced a league table of Oxford colleges based on their climate scores. Somerville College came in first, receiving 51 of 100 possible points and a “D” grade. Corpus Christi and Mansfield College followed closely behind. The worst performers were Brasenose, St Antony’s, St Catz, and University College, all receiving a score of zero.

Jan Royall, principal of Somerville College, told students in an email, “I believe that we can achieve so much more by cooperating on these absolutely vital issues rather than by pitting colleges against each other. Collaboration rather than competition is more productive.”

This echoed the response of the Conference of Colleges, which stated in a press release, “We don’t consider that a competitive league table of the sort CLOC proposes is a useful tool, or that it provides information that can be relied on. We don’t agree with the methodology. Their assessment of the policies and practices of individual colleges is both inaccurate and incomplete, so that the ‘scores’ they have allocated to colleges are wholly misleading.”

Although Somerville College was the top scoring Oxford College with a score of 51, this only translates into An A-Level Climate Action grade of D. Across the 2 universities, Jesus College, Cambridge takes star-pupil position with a score of 67, but that was still only a C. pic.twitter.com/hf9qvCV0Jb

Cambridge colleges did better, with 23% of colleges receiving a passing grade compared to 11% at Oxford. Jesus College, Cambridge topped the list, receiving 67 points and a grade of “C”.

The campaign aims to push colleges to take action through promoting transparency. Cambridge SU President Zak Coleman remarked, “Rivalry between Oxbridge Colleges has existed for centuries. We hope that the CLOC Tables will channel this competitive spirit towards ambitious – and urgently needed – climate action.”

CLOC says it drew inspiration from the environmental, social, and governance (ESG) investment movement in developing the evaluative methodology, consulting with experts in the process. The campaign says that in setting the methodology, it attempted to balance ambition with realism and avoid a bias based on the wealth of certain colleges.

“To the outside world, Oxford and Cambridge University pretend to be leaders in the fight against the climate crisis. Yet on the inside, many of their own colleges are lagging far behind, with no strategies to reach net zero and continued ties to the fossil fuel industry,” says Bhutani.