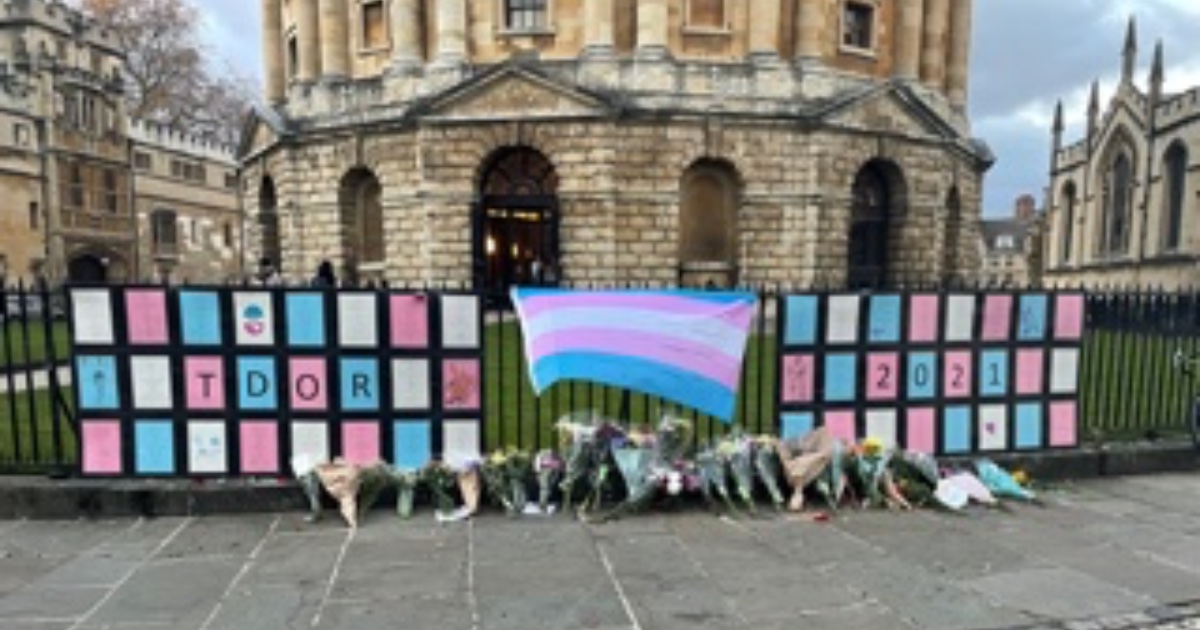 Image description: a picture of the Transgender Day of Remembrance memorial constructed by students bearing the names of those who have died at the hands of anti-trans violence.

People from across Oxford gathered at the Radcliffe Camera on Saturday 20th November to take part in a vigil in remembrance of transgender people across the world who have been lost to anti-trans violence.

In a candlelit vigil accompanied by poems and speeches, people came together to reflect and mourn the lost lives of transgender people. Transgender Day of Remembrance is an opportunity to honour those in the transgender community who have lost their lives not just this year but throughout history because of transphobic behaviour. It began in 1999, in response to the murder of Rita Hester, and has since been observed every year on the 20th of November.

This year over 375 transgender and gender nonconforming people have been killed globally. This is once again the highest number reported on record. A memorial outside the Radcliffe Camera displays the names of those who have lost their lives to anti-transgender violence. The vigil allowed for people to pay their respects and remember those who could not be there.

As well as the vigil at the Rad Cam, colleges and students held their own events to mark the day with a number of colleges flying the transgender flags as well as holding services. Students also drew chalk designs around colleges sending messages of support and solidarity with the community.

There was a minute’s silence for all those who have lost their lives to anti-transgender violence and hatred and participants held candles and reflected.

A co-chair of the LGBTQ+ campaign said that:

“We are very happy with how the vigil went – it was very moving to see such a large turn out, and we hope we were able to provide a space that allowed those who attended to feel safe and supported while processing their grief and sadness. Thank you to all the fantastic speakers, and everyone who came along to show solidarity with the trans community on such a difficult day. We urge people to remember however that while Transgender Day of Remembrance only comes round once a year, anti-trans violence and discrimination is a everyday occurrence: your ongoing support and love is imperative to continue the fight for trans liberation.”

The Oxford LGBTQ+ Society also commented on the event.

“The vigil is an important reminder of loss – the dim glow of candles illuminating the names of those who are no longer with us reminds us that even our own existence here is contingent. But it is also a reminder of the solidarity that the trans community expresses. There’s something deeply symbolic about how one person standing alone could never shield a candle against the cold November air, but how almost 100 people who turned out could hold all their candles up.”

“More generally, the vigil is an opportunity to read poetry and speeches about trans experiences and valuing them in a world that often devalues or sensationalises such stories.”