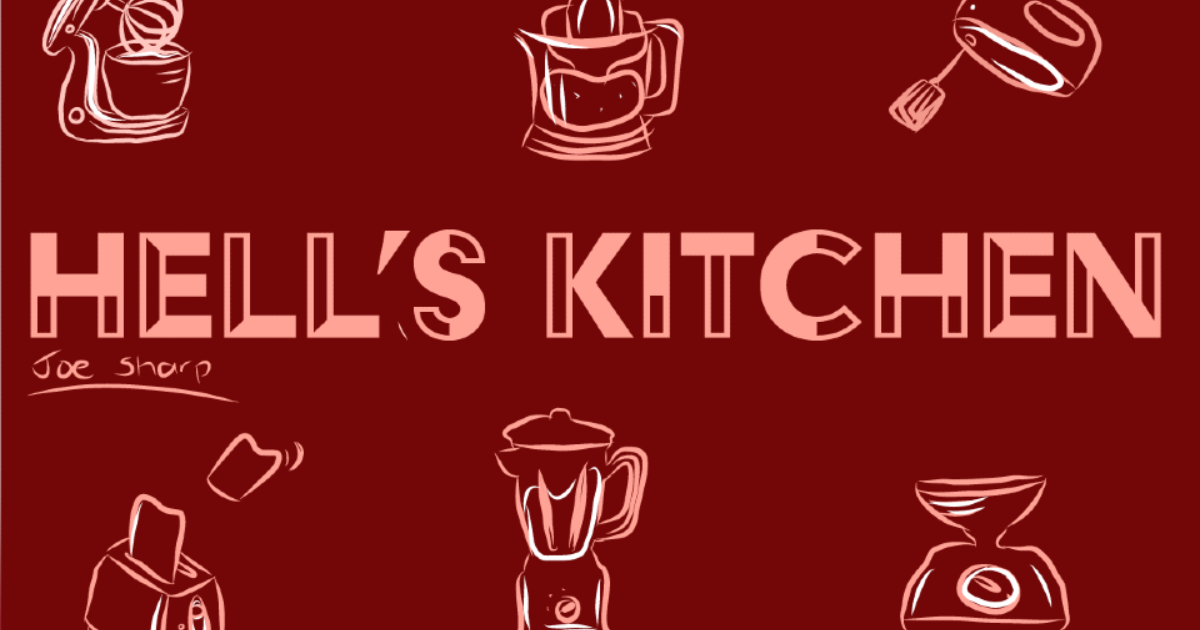 Image description: The text ‘Hell’s Kitchen’ on a red background with illustrations of kitchen utensils

When I was young my parents used to talk about the Clintons. Grandparents would laude the Kennedys. At 7 I stayed up and ate hotdogs with them watching the first black president get elected. A ‘successful’ democratic administration can be era defining. Yet not a certainty. Strict contextual ingredients, perfectly prepared is fundamental in producing a successful Democratic government. In this case a Biden one.
So with great pride I present you my recipe. It is a labour of love, but if you love constructing era defining democratic administrations I’m sure you’ll love it too.

– 1lb of minced economic and social reform — He’s already successfully brought through infrastructure reform but that is not enough. Importantly stop protecting the 1%; raise higher taxes on co-operations, don’t let the billionaires who have made obscene wealth during the
pandemic race each other to space and get away with their games; reform the tax system to ensure this money cannot escape- rise the top income tax rate, tax capital gains and dividend at ordinary rates for those with annual incomes over $1 million. Tax unrealised capital gains at
death. Apply Social Security payroll tax for those earning over $400,000 a year. Close the step- up in-basis loophole. Impose a 15% minimum tax on book income of large companies. Tax profits earned from foreign subsidiaries of U.S. firms at 21%. otherwise the people will continue
to bear the brunt. Don’t cut child tax credits. Reform the filibuster process and get rid of gerrymandering— without this Democratic governments will continue to be twilight moments on the spectrum of American politics. Bring in more universal access to healthcare. Be rid of the notion of pre-existing conditions within healthcare plans. Be rid of prison reform that profit off incarceration. Forgive student loan debt and make college free for those making up to $125,000. Raise the minimum wage to $15. Expand ‘Buy American’ policies through govt purchasing while using subsidies, federal matching and incentive to make American products more competitive. Introduce more forms of Direct Aid providing $1,400 check sent to individuals w/ adjusted gross income of less than $75,000. Beef up support for local communities aiming to provide help for local govts dealing w/ revenue shortfalls as a result of the pandemic. This is the heart and core of this recipe. Without substantial economic and social reforms the Biden administration will fail to maintain power and will fade away in the stream of history. There is clearly much that can be done, and that must be done. The people know this too as the most recent midterms indicate. There are great dangers, as we have already seen, in running on a platform without actual legislative change supporting it. Stick to your promises and make actual change.

– 800g of racial justice — Head to the calls of the people, who are not just citizens of the USA, but also were the core behind your election victory. You must address systemic inequality: displacement, exclusion and segregation. You must close the racial wealth gap and build a more equitable economy for all. Federal agencies must also take additional key steps to expand inclusive communities and enhance safe, stable, accessible and affordable housing. Education, housing, economic reforms and health disparities are all fundamental areas the Biden administration must focus on. The work and advice of the Center for American progress amongst others must be central to this government’s racial justice platform. This ingredient in combination with 1lb of minced economic and social reform is essential.

– 3 cups progressive — Don’t be scared of the socialist fearing crazies of the Republican party, or the more moderate members of the Democratic party. 3 cups of progressive ensures the administration and the party continue to heed to calls for change. Moreover it makes certain the Biden administration don’t become, or is seen by the forces of posterity, to be some bizarre lefty variety of the Republican party.

– 2 tsp of reminders about Trump — The man destroyed the integrity of not only the office, but more importantly the very essence of the American democracy. He led an insurrection on the nucleus of American politics and continue to rile up division and misinformation from the
sidelines.

A few tsps of helpful reminders about Trump and his affect on the country is fundamental in both ensuring the people are not once again attracted by the Orange goon come 2024 and that they are once again reminded of true values of American politics and presidents.
However be warned. Too many spoonfulls of this ingredient can sour your recipe and give the impression, that will no doubt be spread and exaggerated by the more than ready late-night Fox News anchors, that you are simply stirring up unjustified fear, and moreover, using the man as a scapegoat for your own failings.

– Ensure that in serving you include a few sprinkles of white suburban women — these are the  voters that ultimately play a fundamental role in determining elections in purple states. This has been underscored both by Biden’s success in places like Arizona, Nevada and Wisconsin, but moreover the most recent midterms in Virginia and NJ.

– Be sure to taste often — keep a keen eye on local and state-wide elections as these serve to indicate your progress in achieving the fullest more flavoursome version of this recipe. – Make sure you simmer this for 4 years and serve with a sizeable amount of greens, in terms of
environmental reforms and new commitments to global climate change programmes.