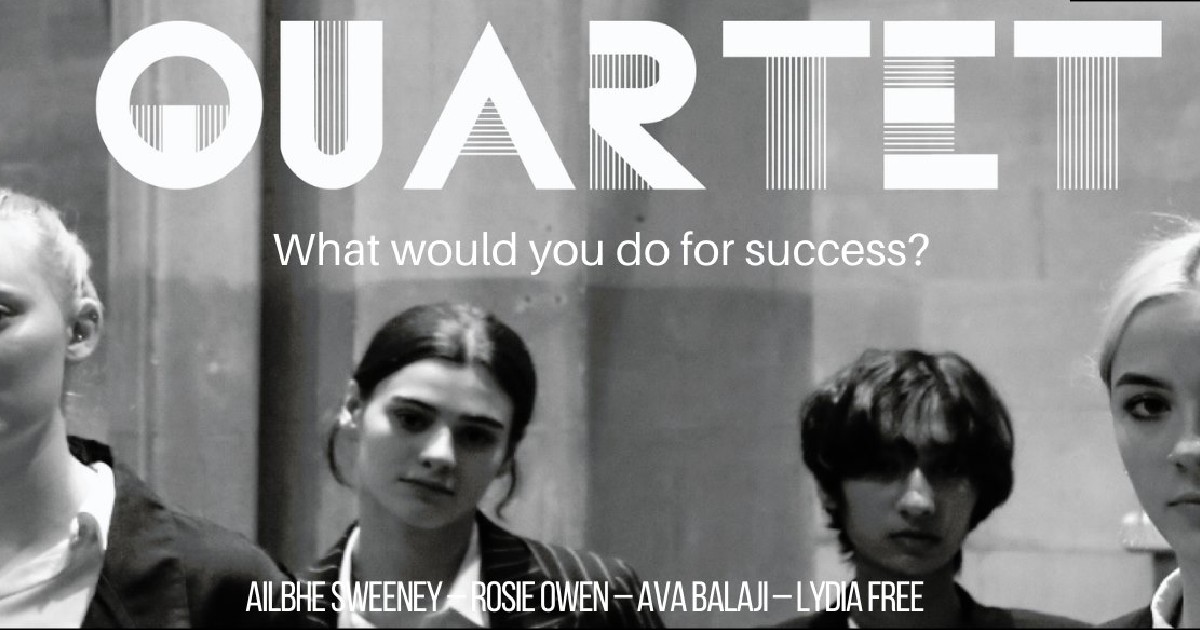 Image Description: the four main characters in black and white with the word “Quartet” above their heads.

I walked into Quartet with little to no idea of what the plot was supposed to be (don’t judge me: I had an essay crisis), so I was intrigued to see what would be behind all the black and white headshots used in their social media campaign. Luckily, I was sat next to the Director, Alex Foster, who I could ask. In a sentence, he told me, it’s about what happens when four schoolboys discover that one of them has written a play about the things that they’ve done at school. From the set, I surmised that one of them wasn’t the brightest – “I am so baeutifull” written in black-marker on the well-designed set – and assumed that I was in for an Inbetweeners-style hour of laughs, with slapstick and farce.

I was wrong. Quartet is more like the History Boys than the Inbetweeners, with a pinch of Dan Humphrey from Gossip Girl. Well, rather more than a pinch, as the boy who has written the play (Chris, played by Lydia Free), like Dan, after initially promising to, refuses to take anything out of his ‘perfect’ masterpiece. This stubborness is the central tension of the whole piece: the three other boys, played by Ailbhe Sweeney, Rosie Owen, and Ava Balaji, all have uncomfortable truths revealed about them in the course of the play within a play (it’s a little bit meta), and have to come to terms with their actions.

Writer Sam Spencer has done a good job, and there are some good one liners in there – on opening night, there were lots of chuckles from the audience. Right at the beginning there’s an argument about the merits of Blair, which is where the show really gets going. The headmaster’s voice, made even funnier by the fact I know the person doing the voice-over (but refuse to give him any further glory here), was incredible, ringing out from speakers at the back of the room, usually talking, strangely, about chocolate bars, like Mr Groff in Sex Education. One scene in particular, played mainly by Ava Balaji, nearly brought a tear to this battle-weary show reviewer’s eye, but I had had a power pint from Merton, so that might be the real explanation. The fight scene is somehow hilarious: Ailbhe does menacing very well, and Rosie Owen pulls the whole show together without coming across as too cloying. The fact that the actors were all female was not a big thing at all – I am not sure if it added anything, but it certainly didn’t detract.

There’s a little bit too much crammed into the only hour-long show, however: with the format as it is, it’s easy to add new revelations without letting the old ones properly sink in, and this can make the show feel a little rushed. Some scenes felt a little forced – put it down to first-night nerves – and some of the language felt a little like a JCR welfare officer talking, rather than a boy in a (Public? State? Who knows – this might have added an extra dimension if we’d known) school sixth form. I really wanted a clearer character flaw for the writer: the narcissism point was brought up a few times, but I wanted the performance to show it more clearly – the character of Chris otherwise feels a little flatter than the others, and it shouldn’t be the case that his stubbornness about his play is hard for the audience to justify. While there was nothing wrong with the musical number – in fact, it was performed admirably, it was possibly the only time that the lack of a live band was properly missed, and it also stuck out as the only one of its kind in the play. The music, however, was wonderful: Maddie Lay does a great job of capturing the characters’ personalities.

The show was a good one – it’s running at the Burton Taylor until Saturday, and there are still tickets available – and after essay crisising all day, it was a fun way to spend an hour. And if that doesn’t convince you, the Burton Taylor also sells very nice ice cream.