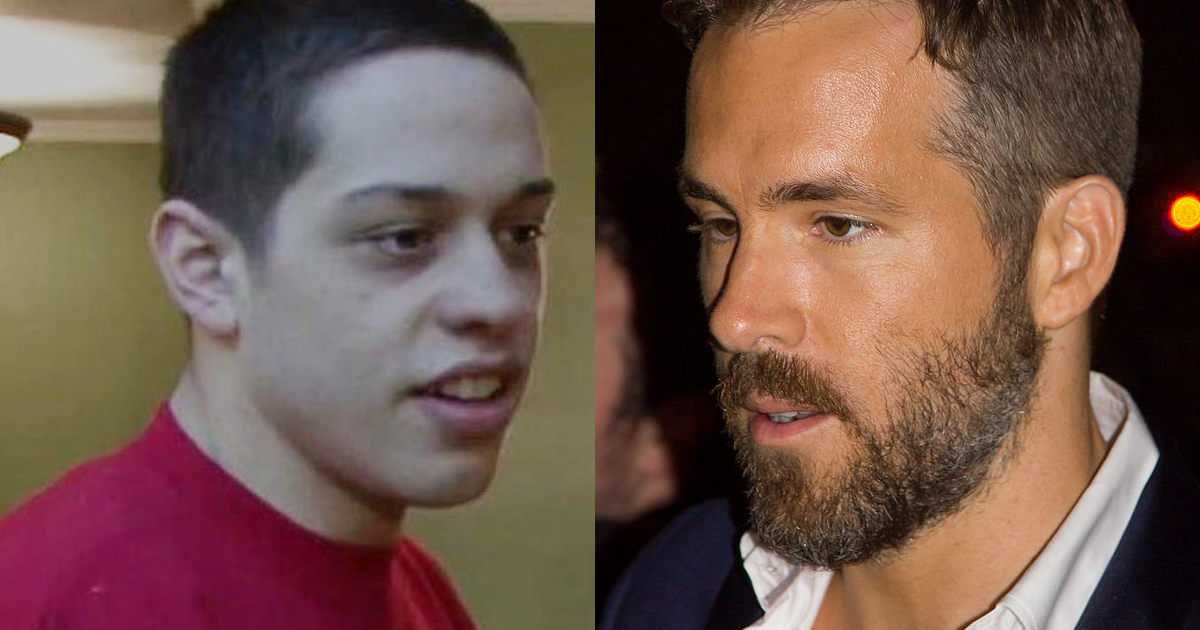 Why Straight Men Obsess Over Ryan Reynolds and Not Pete Davidson

Many straight men I know have been fuming recently. Rumours have been swirling that Pete Davidson is involved with Kim Kardashian, as the two have been spotted together on various nights out, even allegedly holding hands at an amusement park. Sources have varied on the nature of Davidson and Kim K’s relationship, with different sources telling Us Weekly that “the two are just friends right now” and Entertainment Tonight that the two “are casually dating”. From Kim K to Phoebe Dynevor to Kaia Gerber to Ariana Grande, Davidson’s history of relationships has been proof of an immense popularity with women. The recent rumors, therefore, have not only reminded us of Davidson’s dating prowess, but has also left many straight men asking, not without a heavy helping of jealousy–“How?!!!” Or to paraphrase, “Why do women find Pete Davidson so attractive, and not me?” Correspondingly, and perhaps more intriguingly, why do straight men not find Pete Davidson attractive?

On the other hand, a similar phenomenon is equally baffling to the rest of us–the immense popularity of Ryan Reynolds among straight men. In particular, there’s been a growing trend of otherwise straight guys recognizing and celebrating the purportedly immense sex appeal of Ryan Reynolds. While Reynolds is certainly attractive and charming, what about him makes straight men so obsessed?

Indeed, Pete Davidson and Ryan Reynolds share many traits. Both are known for their humor–Davidson because he is a comedian, and Reynolds because of the comedic roles he plays. Both men are emotionally open and, crucially, have good relationships with their mothers. Yet what is the difference between the two figures that makes straight men so obsessed with Reynolds and yet generally dismissive of Daivdson?

Having been named People‘s Sexiest Man Alive in 2010, there is no doubt that Ryan Reynolds is attractive, but hypotheses on the source of Davidson’s charm vary. Some experts even point to his dark under-eyes as a significant attractive feature. Even as I stock up on mascara to smudge under my eyes, however, I still must admit that Davidson is hardly the classic model of ideal masculine beauty. Surprising no one, therefore, most experts recognize that there is much more to Davidson’s attractiveness than his physical appearance.

In particular, experts invariably identify that Davidson’s charm comes from his humor and earnestness. The importance of the former is well-known, even among straight men. It is common wisdom among men that if you aren’t conventionally attractive, you need to be funny if you don’t want to die alone. On the other hand, the latter trait usually poses much greater difficulty for straight men, though its importance may be obvious. The fact remains that men often find it difficult to be vulnerable, let alone emotionally mature. Yet Davidson is not unique in any of these aspects. Ryan Reynolds, though not a comedian, also demonstrates a strong ability to make people laugh–indeed, his form of irreverent humor is comparable to Davidson’s. Moreover, there is no doubt that Reynolds is far more emotionally mature than Davidson. As such, it cannot be these non-physical features that distinguish Ryan Reynolds from Pete Davidson in the male gaze.

Reynolds’ physical appearance is also not what warrants the obsessions of straight men, despite arguments that men simply obsess over Reynolds because he conforms to conventional ideals of masculinity.

If it is neither non-physical nor physical traits that make Pete Davidson so much less attractive than Ryan Reynolds to straight men, then what is it? When pressed further about why they liked Ryan Reynolds so much, the straight men interviewed alternately noted his physical appearance and personality, but there was a rather even split between the subjects on which one really took the cake. Thus, it may not be an inherent trait of Ryan Reynolds that makes straight guys swoon, but the mere fact that his popularity has become a meme, which makes it safe for straight men to profess their attraction to him without fear of their masculinity or sexuality being questioned. Conversely, the meme status of Ryan Reynolds’ popularity makes it funny for straight men to temporarily deviate from their professed sexuality to hop on the bandwagon of praise. Note that while this hypothesis is not supported by empiric evidence, I did catch a strong vibe that this was the case from the mannerisms of many of the men I interviewed with their friends as a group: they not only responded more strongly to Reynolds than those I interviewed individually, but also often displayed that side-glance one does when looking towards other people for approval.