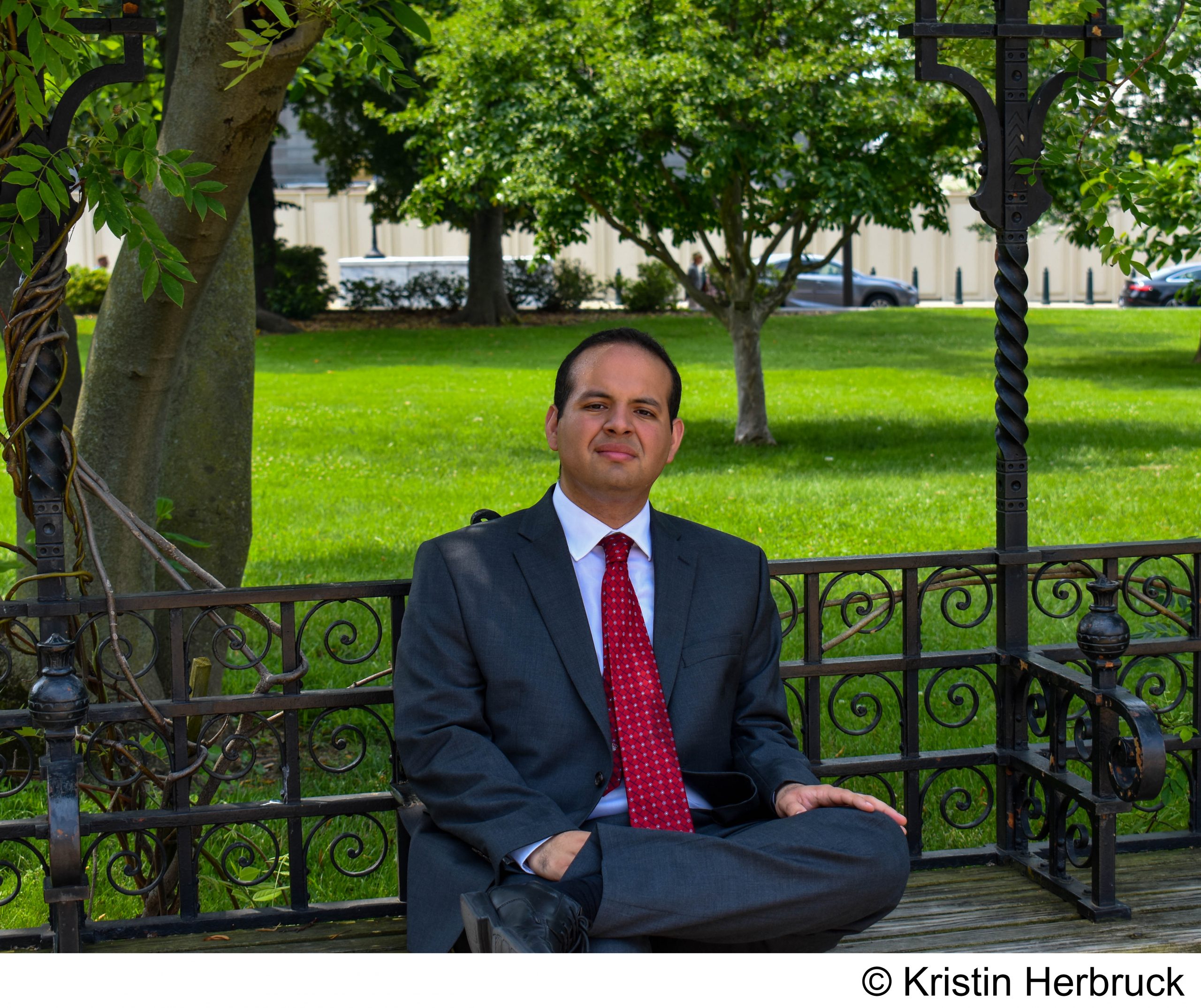 My Interview with Eric Garcia: Journalist and Author of ‘We’re Not Broken: Changing the Autism Conversation’

Like many others across the globe and at this university, I am autistic. My official diagnosis came shortly after my 22nd birthday this year, and in my desperate attempt at navigating this newfound knowledge about myself and the world around me, I stumbled upon Eric Garcia’s book at the perfect time.  ‘We’re Not Broken: Changing the Autism Conversation’ , was released in August 2021, and it chronicles the experiences of many individuals on this very broad Spectrum – of autism, and of our diverse human experiences.

After having to postpone our initial interview due to my sudden, unexpected affliction with the horrors of Covid-19 (despite being fully vaccinated), I eventually had the opportunity to have this conversation with Eric Garcia – virtually, of course, whilst still in quarantine. In a very conventional way of breaking the ice, I began by asking Eric to briefly introduce himself, “because that’s usually how I always start off these interviews… if you don’t mind?”. I hold back from making a joke about being autistic and the preference for repetitiveness and familiarity.

“Alright, so my name is Eric Garcia, I am the senior Washington correspondent for The Independent. I live in Washington, DC, my pronouns are he/him, I am 30 years old – I’m going to be 31 in two weeks! I’m a journalist, and the author of the book ‘We’re Not Broken: Changing the Autism Conversation’, right here!” Eric responds, enthusiastically holding up a copy of his book.

“So how long have you been working on the book, and was it something you always thought you would write?” I continue.

“If we were to go back, it started in 2015 when I first wrote this magazine piece, and I was working at the National Journal (formerly a DC-based publication) for the past few years. I’ve written some stuff in my college newspaper about autism, but I never disclosed that I was autistic. That was supposed to be a fun little chatty piece about life in Washington as an autistic person. But my editor at the time thought that this piece needs to be more ambitious.”

“So I said, ‘well, maybe we should argue that we should stop trying to cure autistic people and focus more on trying to help them live more fulfilling lives’. So that piece happened. That was in December 2015. Then, in March 2016, an agent reached out to me and asked if I wanted to write a book…  eventually, I submitted the final manuscript in December 2020 on Christmas Eve.”

“I hadn’t (initially) considered writing about autism, to be honest. I wrote about economic policy, and I was happy to cover just politics and policy and be running for ‘nerdy insider DC publications’. I was covering the 2013 and 2016 Presidential Campaign and interviewing Bernie Sanders, trying to interview Elizabeth Warren, and I would have been as happy as a clam to just do that for the rest of my life. I thought about writing a fiction novel when I was in community college, but never the idea of writing a bestseller or anything. Oh, and my book isn’t a bestseller, by the way,” Eric laughs.

“When you look back to 2015 when you first wrote that article, in comparison to who you are today, how would you say this whole experience has changed you?” I ask.

“Hmm…I think there’s this impulse among journalists that we’re supposed to be ‘detached’ – separate and detached from the issues that we cover. But writing about anything changes you. You should change your mind about things, and as you learn more about something, you should be able to explain things better. You should have better information, better understanding, and it should change you. There are things that I go back and I read about, like my early writings that I don’t agree with anymore, for example. But I don’t think I would have been able to build that sense of community with more autistic people, or the sense of self that I gained (if I hadn’t written this book).”

Whenever anybody asks me, ‘what has the internet done for autism?’, I say that it has accelerated the trends that were already happening… Our job as journalists is to portray the world as it is, and it can be incredibly difficult to explain nuance in a world that doesn’t celebrate nuance.

“As an autistic journalist, do you find yourself struggling in certain situations, especially when interviewing people? Speaking from personal experience, I know I often take things literally, and can be a bit naïve sometimes,” I add with a laugh.

“Oh yeah? Me too! I also don’t understand sarcasm that much. Sometimes I’ll have to ask people if they were being real with me. After I’ve done certain interviews (there are times when) I think, ‘okay, was this person telling the truth, or were they just messing with me?’ I guess it’s always a balance in the same respect, that I’m more willing to be forward and blunt when interviewing people and it helps to not sugarcoat things. Sometimes that does get me in trouble, because I might say something offensive and not realise it. But at other times, I’m just going to get straight to the point and I still try to do that regularly.”

“I think just like how social niceties might be an impediment or a barrier, my lack of regard for social norms sometimes can also be a benefit, because it means I don’t take any bullsh*t. If I see people hiding behind social norms to avoid telling the truth, then I am going to call you out on it. Last week, for example, I interviewed this member of Congress who pretended not to understand my question, but (because of my persistency), I eventually got a really good quote from him.”

While Eric’s book aims to platform the many different voices from within the autistic community and the depth of each individual experience, he also addresses issues regarding the widespread misinformation on autism throughout these past few decades. Arguably, each generation faces uniquely different challenges, especially with more efforts being made into raising awareness on what autism is (and isn’t), and how the diagnostic criteria has also changed over the years. This prompts me to question Eric about what he thinks of platforms like Tiktok and Twitter where people continue to be more vocal about neurodiversity. Like a double edged sword, social media’s role in raising awareness can also result in the spread of misinformation, especially amongst young, impressionable people who may obtain information from unreliable sources.

Autistic people should also be allowed to grow, to regress, to succeed and fail, and not have their success or failure be considered a reflection on the autistic community as a whole. You want to be judged individually by your own merits, and not having the burden of feeling like your individual successes or failures are a reflection of the community.

“Yeah, I think it’s, it’s, it has benefits and drawbacks, doesn’t it?” he says. “Because on one hand, it’s democratised. Social media has democratised diagnosis labels, it’s democratised communities, and it’s created this kind of community to the extent that I can talk to you when I’m in Washington DC while you’re in Oxford. But there are also no gatekeepers. Just in the same way that it allows people to connect, who otherwise wouldn’t have this opportunity – the fact that there are no gatekeepers means that said information can just go unfiltered. Whenever anybody asks me, ‘what has the internet done for autism?’, I say that it has accelerated the trends that were already happening… Our job as journalists is to portray the world as it is, and (especially on social media), I think it can be incredibly difficult to explain nuance in a world that doesn’t celebrate nuance.”

In a similar vein, we continue to discuss how autism and other disabilities are still often perceived as binary, and how such infantilised and/or romanticised portrayals of autism continue to be harmful. I quip how autistic people who conventionally succeed are often hailed as an ‘inspiration’, yet those who have not been so lucky (most often due to systemic and societal failures, and lack of proper support) are often treated with condescension, and not awarded the same amount of respect.

“Human beings are not black and white. Human existence is incredibly complicated, and in the same way, I think autistic people should also be allowed to grow, to regress, to succeed and fail, and not have their success or failure be considered a reflection on the autistic community as a whole. You want to be judged individually by your own merits, and not feeling burdened by the thought of your individual successes or failures being seen as a reflection of the community. But I guess the same can also be said for any other marginalised group – like people of colour, religious minorities, immigrants, LGBTQ people, etc. and feeling like you’re always being stereotyped, or expected to represent certain ideals,” Eric responds.

“And when we talk about support systems for autistic people, it is also about having sufficient support systems that allow you to try and fail at different things,” he continues. “Having the right support system also means having the right people around you, who allow you to screw up and try different things, and support what you want to do. But autistic people have significantly less room to ‘screw up’ because of the way society judges them, and their competence automatically comes into question. Like, for example, if an autistic person fails at a certain task, it is assumed that they cannot be independent, or that they cannot have a job – rather than thinking how it was only that specific thing that wasn’t right for them.”

Before our conversation draws to a close, Eric emphasises how autism is “a condition that has been so criminally misunderstood for such a long time, and is something that still requires more understanding. Ultimately, that is also why I wrote this book. Autism is incredibly complicated, and the people who have autism also affect how we see autism, just as much as autism affects how we perceive other people. It’s always a two way street.”

In a wholesome, affirming conclusion, he adds, “I used to wonder, ‘where does my autism begin, and where does it end?’ But I realise that it doesn’t begin or end as one thing or another, it’s just a part of you. It doesn’t necessarily make it good or bad, it’s just the way it is.”

More information about Eric Garcia can be found on his website, http://www.ericmgarcia.net/‘. We’re Not Broken: Changing the Autism Conversation’ aims to debunk common misconceptions about autism, and to show that autistic people are everywhere. The book is a compelling illustration on how autistic people wrestle with education, workplace, and healthcare systems that weren’t built for them. Most importantly, he puts into writing how autism is a part of their identity, and how they don’t need to be fixed.

The book is available for purchase here.

Featured image description: Eric Garcia, dressed in a suit and tie, sits on a bench and poses for the camera.