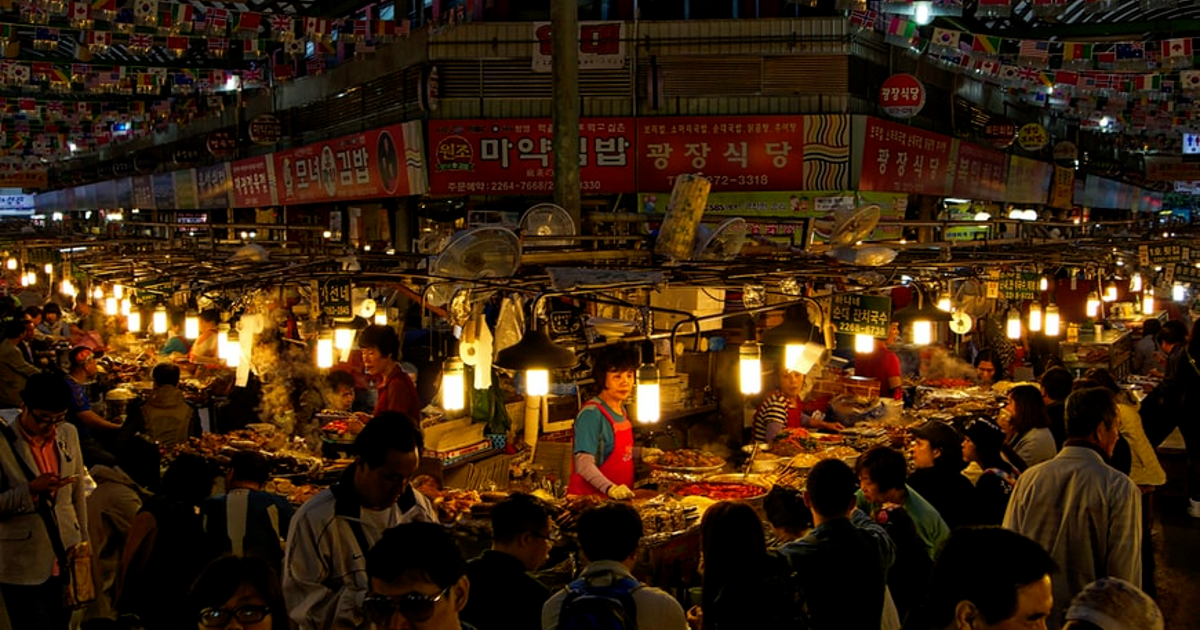 Image description: people standing in front of a Korean food store at nighttime

Nostalgia isn’t something that hits right after you’ve had an eye-opening experience. I feel that it didn’t hit me at all when I first arrived at Oxford from Korea. I was just excited to start a new life at a university I’ve dreamed of being at ever since I was a little girl.

It was the same when I moved from home to London three years prior for my undergraduate studies. I was met with a whirlwind of new experiences – new friends, a new city, a new level of academic rigour – I had no time to think about how much I missed my home country.

I came to Oxford expecting that same feeling, that overwhelming adrenaline of excitement from meeting new people and living in a city with such a long history. I was wrong, though. Over a month after I had arrived at Oxford, I started to feel a pull back to Korea. I don’t know if it was the lack of rice and the abundance of potatoes during my 10-day quarantine but that craving for a really hearty Korean meal didn’t go away and isn’t really gone now.

I tried going to the only Korean restaurant in Oxford, Bamboo, in fourth week. While it was a lovely experience, there was something about stepping out into a busy St. Clements street after having a belly-warming bowl of kimchi stew that really juxtaposed the experience I had just had. Home food tastes better at home – with family and with friends. Kimchi stew tastes best when you’re sitting next to a bunch of ajussis (Korean for ‘old men’) on a Saturday morning after a night out to cure your hangover caused by somek (soju, a Korean rice liquor, mixed with mekju, the Korean word for beer).

In light of this, I’m here to share the best of the food I had in Korea. This summer trip was my first in two years due to Covid travel restrictions preventing me from stepping foot in the country. I spent this summer eating, eating, and eating because I knew I was heading to a place where Korean food isn’t the same – a place where kimchi is put in burgers for a ‘quirky’ twist, a place where Korean food is the recent ‘hipster’ trend. Don’t get me wrong, these fusion foods sometimes sound great but a bite doesn’t teleport me back to Seoul the way I’m looking for when I crave Korean food.

This is a picture of my day two quarantine meal. In Korea, we

must quarantine for two weeks after arriving from a foreign country but all the good food made it feel shorter than my UK quarantine. Bless my mum bec

ause she left takeaway foods for me outside the house every other day for me to satisfy my cravings. DdeokTwiSoon is a shortened version of a famous street food trio that must be devoured together – Ddeokbokki, spicy red pepper paste rice cake, Twigim, fried veggies and foods in batter and Soondae, a Korean blood sausage. The Twigim and Soondae are best enjoyed by dunking a piece in to the Ddeokbokki sauce. Quickly chase this bite with a rice cake and danmooji (pickled radish) and you’re all set. This is the quintessential Korean street food, a meal that Koreans will turn to if they want to revisit their childhood.

These are a series of pictures from a day-drinking session with my friend. It had been a year and a half since we last met but it was as if we’d never left each other. To celebrate the occasion, we went to a NaengSam place where they sell thinly sliced pork belly with an impressive plate of hearty sides that include kimchi, egg rolls, veggies and an assortment of sauces. In the UK, Korean meat is usually grouped under K-BBQ which isn’t a comprehensive enough subsection to encompass the diversity Korean BBQ has to offer. My friend and I ended up eating 3 portions of NaengSam each but that’s a secret between just you and me. 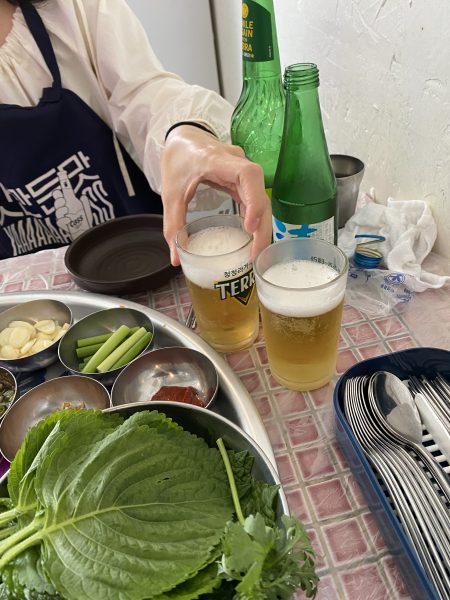 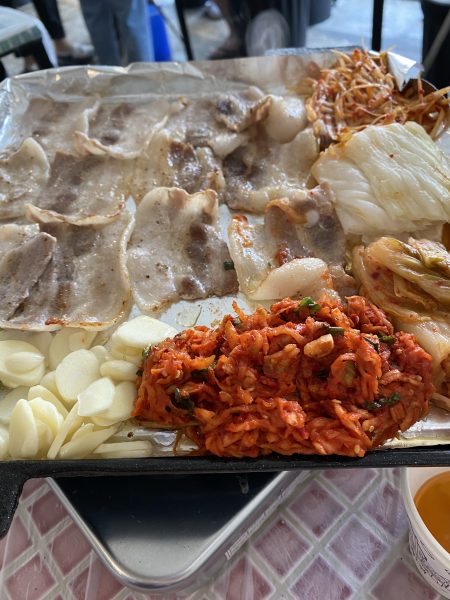 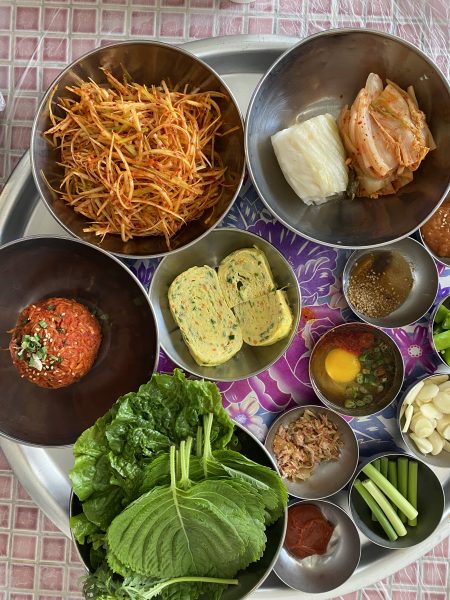 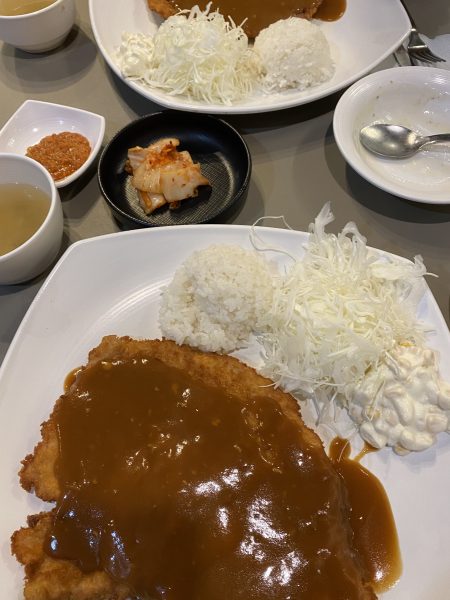 This is arguably my favourite food in Korea. At one point this summer, I was having this four times a week which just proves my borderline unhealthy obsession with this meal. Giving a Korean twist to the Japanese Katsu, the pork fillet is flattened out, battered, and fried so it forms fried goodness bigger than your face. It is served with a side of rice and cabbage with mayo and ketchup. Restaurants often present the dish with a side of kimchi, macaroni salad, morning rolls, cream soup, and green chilis with a bean paste and chili paste mix. A delightful fusion of western and Korean flavours makes my tongue dance.

o the city of Busan, a port city situated in the south. It’s a regional favourite and my pick for the best meal I had during this five day vacation. Dawagi Gookbap is essentially pork bone soup with pieces of pork, presented with a serving of rice. It is key to add the spicy garlic chives into the soup to give it the crunch and spice needed. You can follow up a bite of soup and rice with green chilies, fresh garlic or onions, whichever satisfies your palette.

Korea is where my stomach is, and I miss it so.