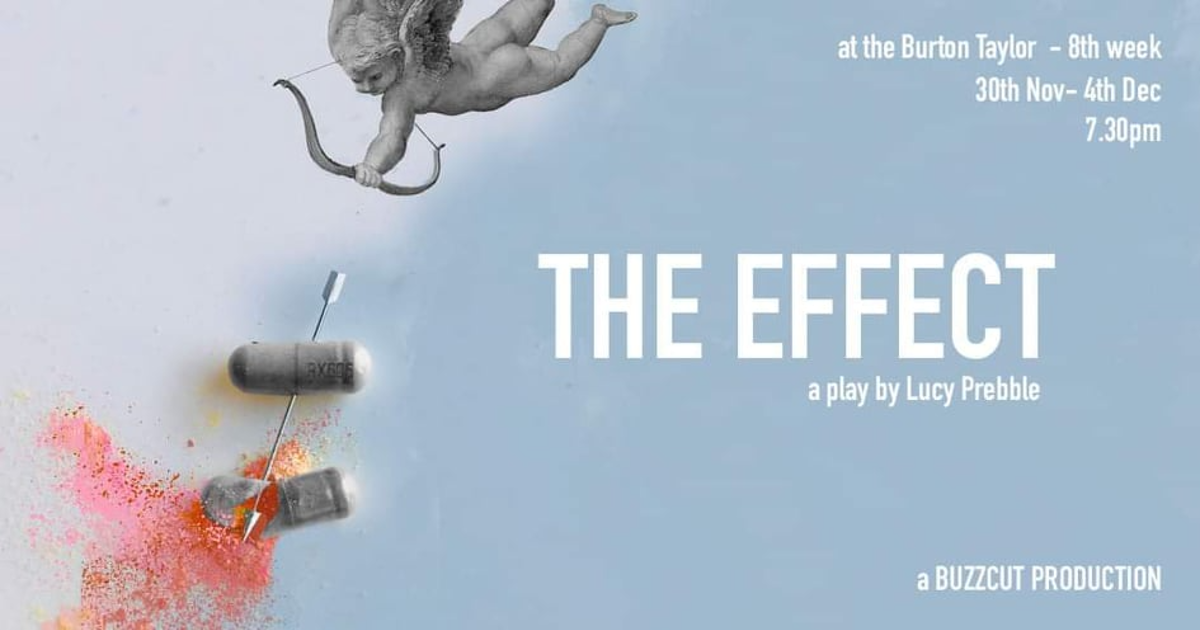 The Effect review – revelatory and ingenious

Image Description: The Effect poster with an illustration of Cupid shooting an arrow through pills on a blue background. With the main text reading ‘The Effect a play by Lucy Prebble’ ‘a Buzzcut Production’

Do we love? How do we love? How much do we love? Lucy Prebble’s ‘The Effect’ does not significantly depart from the tried-and-tested romantic comedy formula of placing two attractive people in an alien setting and see what happens, but it dares to raise the big question on the irreducibility of love in a revelatory and ingenious way.

In this play, Tristan and Connie, Prebble’s ‘Harry’ and ‘Sally’, meets in a medical research centre where they are going through a four-week pharmaceutical trial as participants to test out a new antidepressant. Stuck in an enclosed environment, they soon rely on each other for companionship, comfort, banter, and unsurprisingly, love. As they experience all the symptoms of love, they also begin to question whether the romance is real or whether it is just an artificially programmed effect of the trial, especially as they learn that one of them has been given a placebo. At the same time, the doctors overseeing the experiment, Dr Lorna James and Dr Toby Sealey, also experience the same conundrums as the audience soon learns that they were former lovers.

Stuck in an enclosed environment, they soon rely on each other for companionship, comfort, banter, and unsurprisingly, love.

What separates the play from others of the same kind is its abundance of witty and clever dialogues. Prebble, also a writer on HBO/Sky Atlantic’s highly acclaimed show ‘Succession’, has a knack for writing caustic humour. Her writing adroitly captures flirtation, sarcasm, rebellion and anger, and delivers them in raw, earnest and feverishly entertaining way. Abstract theories and ideas on science, psychology and relationships are translated into easily accessible and amusing exchanges that keep the audience engaged without feeling too didactic or expositional. It also does a commendable job in leaving the audience in suspense, invested in the fates of our protagonists as they weather the up-and-downs of romance that feels simultaneously experimental and relatable.

Grace de Souza, who plays Connie, is a revelation. A standout in her ability to display the excitement of falling in love masqueraded in recalcitrance and apathy with a great deal of subtlety and naturalness. She excellently portrays stubbornness and nervousness, but also the playfulness, tender and ultimately, recklessness of her character. Legs shaking, fingers twitching, her acting conveys motion and tension even in the quietest and most contemplative scenes. Jules Upson also delivers his part with confidence and ease, inhabiting the character Tristan with bravado and charisma. He is able to portray romantic chemistry and sexual tension in a seemingly effortless way, and shines in a scene where Tristan impresses Connie with his rendition of the aptly chosen ‘Can’t take my eyes off of you’.

The writing loses some focus and momentum in the scenes with Dr. James and Dr. Toby, despite Prebble’s best efforts to convey the analogy between the doctors’ relationship and that of Tristan and Connie. Occasionally, this relationship feels a little tacked on as a plot device to highlight the themes of the play but lacks the urgency and tension that are present in the main protagonists’ relationship. Other times, the conversations on psychiatry and mental states carry more jargons and pedagogy than needed, outlasting its initial welcome.

Nonetheless, Kaitlin Horton-Samuel and Alec Watson, playing the two characters respectively, do excellent work with the material given. In particular, Horton-Samuel is able to display the complex and compounding emotions of her character as she slowly reveals her own problems with mood-altering drugs. Her acting is empathetic, gripping and has incredible range. A monologue in the third act provides a cathartic moment for the character and a highlight of the show as she recounts her own history with love and her growing doubts and uncertainties with the drugs and the ethics of the experiment that directly lead to the explosive ending.

Horton-Samuel is able to display the complex and compounding emotions of her character as she slowly reveals her own problems with mood-altering drugs.

The set, blocking and lighting brilliantly externalise anxiety and claustrophobia that the characters are going through. The projection of supertitles indicating the dosage being administered and the taped interviews of Tristan and Connie before the trial are creatives devices that add to the mystery and other worldliness of the story. A scene featuring the characters talking simultaneously to Dr. James while being separated by room dividers as they recount their symptoms and reveal their longing for each other is a knockout. As we witness the pair surrender themselves to the adrenaline of love, one can palpably sense the thrill and excitement in the air.

The Effect is a minimalist play with a strong message, an intimate examination on the intricacies and volatility of love that should not be missed. It’s not strictly adherent to logic, nor is it interested in answering all the questions it poses. Yet, like love itself, it leaves a deep, lasting impression, irresistible, enthralling and ultimately, bittersweet.