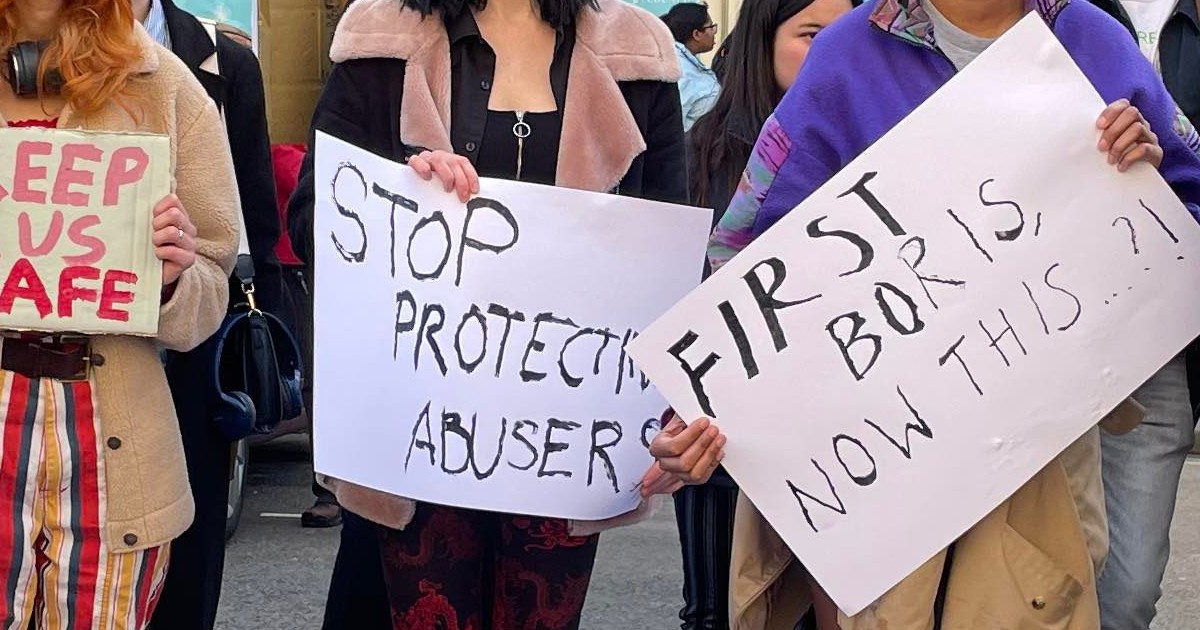 Inside Balliol: A Difficult Term

Image Description: a selection of signs at a recent protest outside of Balliol.

It’s been a hard term to be at Balliol. There have been numerous protests, meetings, open letters… name a method of protest and demonstration, and it’s been tried over the last eight weeks. Students have been complaining of poor treatment of sexual assault survivors, from being disbelieved, to being told to consider the effect they had on men, and even having the College refuse to investigate because the matter wasn’t reported to the police. They couldn’t do that to staff members, so why can they do that to students?

Serious welfare concerns had been raised, and no one seemed to be listening.

There are few College communities left as shaken by the allegations in the recent Al Jazeera reports: Pembroke announced weeks ago that Andy Orchard had taken a leave of absence from the Governing Board of the College, and the History Faculty confirmed earlier this term that Peter Thompson would also have no contact with students this academic year. No such action could be taken at Balliol, but the slowness of the College to respond left students angry and upset. Serious welfare concerns had been raised, and no one seemed to be listening.

This feeling is reinforced by The Times reporting that just a few days ago a student has alleged that private and confidential details of the investigation into her report of sexual assault were shared at a public meeting held by the Master of Balliol. Given that much of the campaign has been about student’s welfare, this was yet another kick in the teeth for the campaigners; another push back from a College that has failed to properly report and investigate cases, and that has repeatedly failed survivors of sexual assault.

For as long as I have been at Balliol there have always been rumours about sexual assaults. I assume that this happens in every College, but it seems more prevalent in some than in others. Stories abound across year groups; warnings are passed through word-of-mouth – and make sure that you aren’t the fresher that year who doesn’t know who to avoid at college bops. Again, Balliol is not alone in having warning networks, but the sheer number of alleged cases is astounding and, I would bet, far more than the Governing Body or welfare team could ever claim to know about. That’s what makes it so frustrating to see the Master, Helen Ghosh, telling a group of protestors that they can’t know whether a nation-wide statistic applies to Balliol, because it’s far from obvious that she could offer even a vaguely educated guess.

This is a College-wide issue, and pre-held prejudices run deep into the Governing Body.

It’s also worrying that it has been up to students to push for a response to the claims made by Al Jazeera. The Balliol Community for Safety has done an admirable job, and have gained national attention for their cause. However, while the QC-led investigation may have come from their actions, there is only so much students can push the College to do, and it is very difficult to hold them to account. Students should have input, but it should not be up to them to make ancient institutions improve their welfare provision. Where was the response from the College when the allegations first became public? It was weeks before the issue was properly addressed in messages to the student body, and clear from the beginning that the College did not see the allegations as a serious problem. This is a College-wide issue, and pre-held prejudices run deep into the Governing Body.

Sexual assault is a difficult and touchy subject, and one with an awful lot of blurred lines and grey areas. But Colleges including Balliol urgently need to stop treating students as a threat to their liability, and start concentrating on their welfare. It doesn’t take a long and invasive investigation to assure students that they won’t be put in tutorials with someone that they have accused of sexually assaulting them, or to make sure that they don’t live on the same staircase or in the same flat. Balliol has occasionally offered rooms to students in College if they severely fall out with their housemates – they can’t say that they won’t offer that to others just because the accusation is one of sexual assault. There are clearly measures that can be taken without investigation: Colleges do it all the time to ensure that the community runs more smoothly. If that’s what a survivor wants, that is what the College should do.

The frustration of those who are assaulted is swept aside – as is their discomfort – because a first is still a first, right?

Balliol not only fails to do this, but actively protects those accused of assault, and allows them praise and acclaim. Concerns over non-academic behaviour should impact the giving of academic prizes and titles. Academic achievements are not deserving of public commendation if that gives credit to sexual assaulters. The frustration of those who are assaulted is swept aside – as is their discomfort – because a first is still a first, right?

Don’t get me wrong, I want to have hope for the QC investigation, and in the independent welfare investigation run by the former Deputy Head of the University’s Counselling Service that will run alongside it, as the College announced to students in an email recently. After all, I’ve still got to live and study in Balliol. But when a College seems so determined to drag its feet on something that clearly matters so much to students, it becomes increasingly difficult to believe that it won’t stick its head in the sand and refuse to listen to recommendations. Just as, so far, it’s been refusing to listen to students. So hope is a far-off dream; at least, until we find out who the QC will be.

But a reminder – students don’t have to go to their Colleges. There are other services available. It is always possible to report to the police, although this can be an invasive and lengthy process. OSARCC, the Oxfordshire Sexual Assault and Rape Crisis Centre, helps survivors of sexual assault in a number of ways, including counselling and listening services, alongside support in reporting. There is a University Sexual Harassment and Violence Support Service, if you’re happy to talk to someone from the University. Even if you don’t want to report, there are still many resources available online to help survivors of sexual assault.