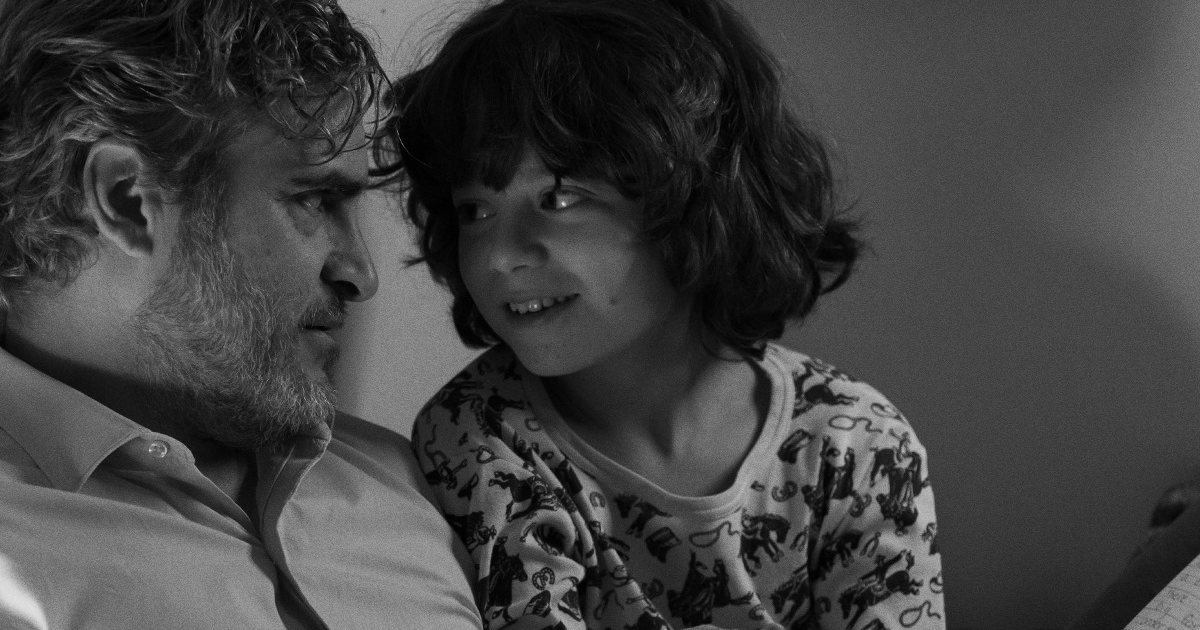 Image Description: A black and white still of Joaquin Phoenix and Woody Norman from C’mon C’mon looking at each other

As we grow up, what do we lose? What do we gain? How do we change? That raw
precociousness of an inquisitive child – no filters, no boundaries, there really is no stupid
question in his mind. Mike Mills’ C’mon C’mon follows an uncle-nephew relationship
through the ups and downs of modern life, thrown together due to family crises. We watch
their relationship unfold and develop incrementally and sometimes awkwardly. The
juxtaposition of these characters extends beyond their wide age-gap, but it is through these
differences and odd similarities that their connections are forged.

The contrast of the reality of the somewhat estranged uncle-nephew relationship of Johnny
and Jesse at the start of the film, versus the clear wish and will to forge a relationship,
mimicked the setting in which I saw the film. One of the most popular screenings of the
annual BFI Film Festival, ‘Surprise Film’, is what it says on the tin–a complete surprise. Tickets
are bought blind and you have no idea what you’re walking into as the theatre at the Royal
Festival Hall fills up, the anticipation increasing as each new member of the audience walks
in. The energy is physical, and never have I been a member of such a reactive audience – so
engaged, so excited. Resembling the audience of a live theatre production rather than that
of a cinema, the restlessness and adoration for cinema is contagious, an enthusiasm rarely
experienced in those half-empty cinemas where people leave the cinema midway through or talk
incessantly as the film is screened.

The energy is physical, and never have I been a member of such a reactive audience

Johnny is a middle-aged man who is a little plagued by complication and inability to express
his emotions with candour to match his nine-year-old nephew, Jesse. Starting with
interviews with young people in schools across America (conducted by Johnny), the
audience is invited to think about the future. They are littered throughout the film, as
Johnny travels across the country to conduct this project, and they provide some of the
most poignant scenes. Their answers are recognisable. You already know them, because
chances are you have already felt and thought them, at that age when the world beyond
school halls was equal parts an enigmatic excitement – a place you couldn’t wait to enter –
and equal parts a seemingly daunting hell, with a ticking time bomb hovering over it. The
intense emotion from such fleeting scenes could have been mined better. Giving more focus
and screen time to these interviews would have rooted the film even more strongly in
audience members, through the uncompromising and incontestable reality of the thoughts,
fears, and feelings of the students.

A fervent tangle of hope and realism in their answers is contrasted with the muddled lives of
the adults. We see their penchant for beating around the bush and, from their explosive
emotions, the near-vertical path that is adulthood – are we simply more carefree when
we’re young? Are our complications self-inflicted, or does life simply ramp up the difficulty
level with each lap around the sun? These questions flew around my mind incessantly for
the duration of the film and days after. Upon reflection, I’d answer yes to all of them. They
are not mutually exclusive, because life is not clean-cut. You cannot sort it periodically
into neat boxes, each with definitions of difficulty level, experiences had, or emotions felt.
The years blur and timelines change unrecognisably from person to person, a case of never-
ending ups and downs, of swings and roundabouts.

A fervent tangle of hope and realism in their answers is contrasted with the muddled lives of
the adults.

With the frames shot from close to the face, then a few metres back with obstruction, you
are left feeling simultaneously close to and far from the characters that populate C’mon
C’mon, emulating being close to and yet so far away from your younger self. So close to the
spontaneity, restless inquisitiveness, and unfettered creativity that dominate our childhood
minds, yet so far from these same traits as we find ourselves increasingly unable to make
what should be the simple changes to allow ourselves to indulge in these again.

Mills admitted his profound personal sensitivity in an interview with the LA Times, and it
shows in C’mon C’mon. As we follow Johnny and Jesse, the complexity of both adulthood
and childhood becomes palpable, but not overwhelming. There is no big scene, no
deafening crescendo, just small twangs scattered here and there in this subtle story of life,
and relationships, and change, and keeping on keeping on.