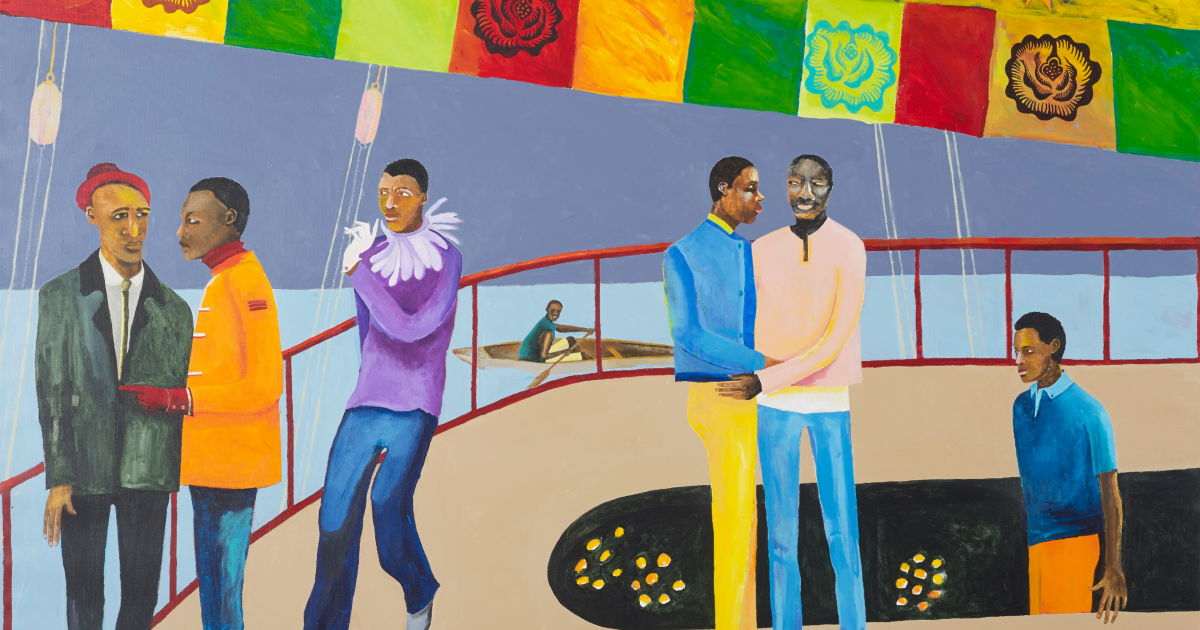 Lubaina Himid at the Tate Modern

Image Description: the piece ‘Ball on Shipboard’, 2018 by Lubaina Himid.

One of the many perks of student life in Oxford is the proximity to the countless cultural centres of London. Although two hours of travelling may be something that most students are apprehensive about dedicating their very limited time to, the incentive of being able to see artists like Lubaina Himid is absolutely worth the journey. Those living in Oxford in 2017 may remember her exhibition ‘Invisible Strategies’ at Modern Art Oxford, which challenged and reimagined the Western canon.

A pivotal figure in the Black British Arts movement of the 1980s, Himid is a Royal Academician, with an MA in Cultural History from the Royal College of Art. Currently living and working in Preston, she has been awarded the Turner Prize in 2017, as well as a CBE for services to art in the 2018 Queen’s Birthday Honours. A recurring theme throughout her work is the exploration of social and political issues surrounding gender and race, offering honest and original reflections of the lived experiences of Black people, particularly women, in Britain. Her exhibition at the Tate Modern, the largest show of her work to date, focuses on challenging the viewer to consider their agency, and to contemplate what they truly want from life. Although her preferred medium is painting and drawing, Himid uses sculpture, architecture, soundscapes and music to achieve this effect.

A striking aspect of Himid’s exhibition is the care she has put into creating the overall environment of the exhibition. The exhibition doesn’t simply showcase Himid’s work but is carefully crafted to create a specific atmosphere. For example, there is a noticeable lack of informative bodies of text on the walls, contrasting with the usual layout of exhibitions at the Tate Modern. This makes the exhibition feel like less of a collection of paintings and more of a world which the viewer steps into. Himid describes how “The audience member is in the paintings… The experience should be similar to entering a room and deciding what you’re going to do, how you will react and interact”. Further to this effect, the plaques next to the artworks only feature the respective name and date, allowing the viewer to realise for themselves how works make them feel rather than being told. It also leaves any meaning open to interpretation, letting Himid’s message be conveyed through the artworks alone and the atmosphere created by them.

Despite the recurring use of bright cheerful colours in Himid’s work, the exhibition creates a consistent sense of dull ache and brooding pain regarding the traumas of the slave trade.

Himid’s exhibition subtly but eloquently recalls the horrors of the Transatlantic Slave Trade, whilst looking forwards, encouraging the viewer to consider the extent of their agency and enfranchisement. Himid writes that she wanted to capture ‘the ghost of it all’, and that “Rather than paint hundreds of people in great distress and dying, I wanted to create something that conveyed a sense of absolute inability to understand what was happening.” Her deliberate choice to not focus on naturalism means the paintings have the sense of a dream world, or memory, and are in some instances slightly nightmarish. She also employs the returning motifs of the sea and eccentric, deserted and yet somehow forbidding architectural structures throughout the exhibition, hinting at a sense of isolation and tragedy. Despite the recurring use of bright cheerful colours in Himid’s work, the exhibition creates a consistent sense of dull ache and brooding pain regarding the traumas of the slave trade. This silence and lack of rage is a poignant reflection of how people have not been given the luxury of outrage and have been given no choice but to move on with their lives as best they can despite huge injustice and oppression.

Himid also emphasises the process of moving forwards, and on people, particularly women, defining themselves on their own terms, asking questions such as “We live in Clothes, we live in buildings, do they fit us?” Himid pays attention to mundane and often unnoticed activities, encouraging the viewer to do so as well, with works such as ‘The Operating Table’, which is premiering in the exhibition, along with six other of Himid’s new paintings. The painting shows women working on a quilt, reflecting the dissecting and patching up of history and identity, as the women define how their story is told. Himid’s ‘Blue Grid Test’, which is also debuting in the UK, shows everyday objects such as paper bags, musical instruments, clocks and furniture placed on the wall under a 25-metre-long painting featuring 64 different patterns from around the world painted in blue. Although these objects are manufactured, the way they are organised and presented is art in itself as it prompts the viewer to reconsider their significance, both to themselves and to others. Himid continually prompts the viewer to self-reflect, with each room titled with a question, and a list of questions at the beginning of the information pamphlet guiding the viewer to examine how they are engaging with the exhibition.

The use of soundscapes is yet another element that contributes to the exhibition having an immersive atmosphere, distinguishing it from the typical show of an artist’s work at the Tate Modern.

The use of sonic art to extend the visual works is yet another unorthodox but extremely effective highlight of the exhibition. Having worked closely with sound artist Magda Stawarski-Beavan, Lubaina Himid includes recordings of her own voice in the rooms as well as pre-recorded Classical music. In ‘What does Love Sound Like?’ and the brand new installation ‘Do you want an easy life?’, Himid uses carefully placed speakers to fully immerse the viewer in the work. Stawaska-Beavan’s juxtaposition of Classical music with the stories of enslaved individuals, read by Himid, adds to the sense of forced unnatural calm. The use of soundscapes is yet another element that contributes to the exhibition having an immersive atmosphere, distinguishing it from the typical show of an artist’s work at the Tate Modern.

The personal touch of the exhibition, allowed by the fact that, unlike many artists, Himid is alive to curate it, gives it a uniquely sincere and intimate atmosphere. By inviting people to look at her art, Himid offers the viewer to truly look at themselves, and examine whether or not their standards are met. The exhibition is a celebration of marginalised groups taking back the agency that they have been denied while challenging the viewer to do the same. By storytelling through her art, Himid has created a uniquely personal and inspiring experience, which asks the intimidating question of ‘What do I really want from life?

The Lubaina Himid exhibition is running at the Tate Modern until the 3rd July 2022, you can book tickets here.