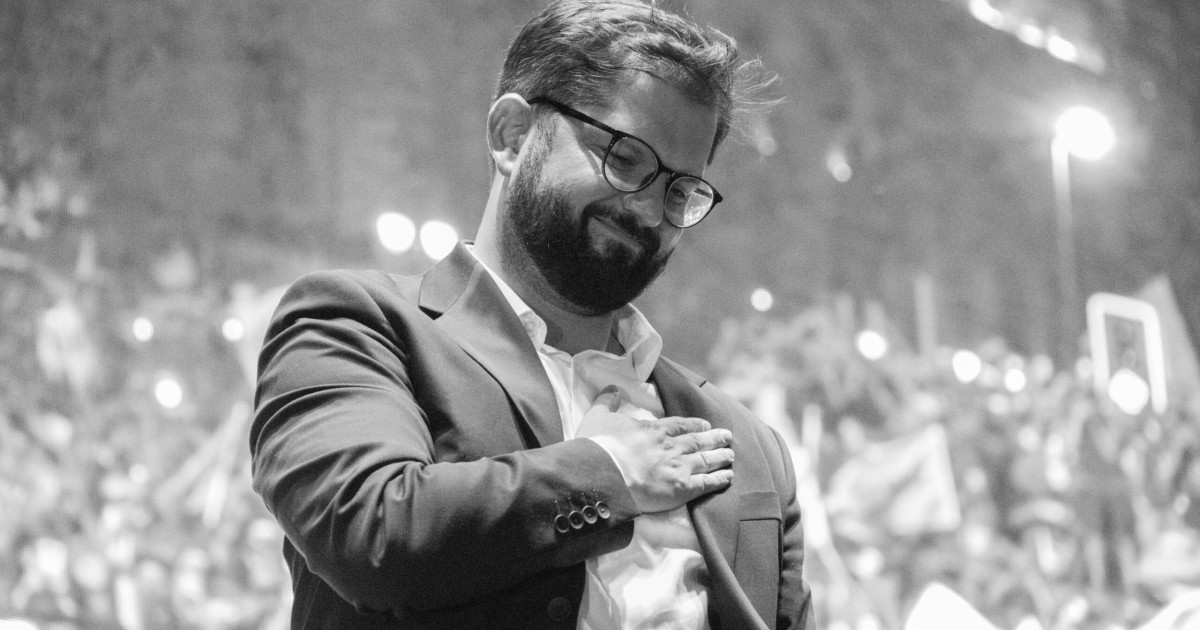 After a Boric victory, the future of Chile remains unclear

Image Description: Gabriel Boric stands in front of a crowd, hand on his chest in a gesture of sincerity.

On the morning of 19th December 2021, the fate of a nation was undecided as Chileans voted in the second round of their presidential election. Yet for those hoping for more certainty after election results were confirmed on the next day, the future of Chile remained uncertain. Although the socialist Gabriel Boric (leading the Approve Dignity alliance) had secured victory, his allies did not achieve a majority in either the Chamber of Deputies or the Senate.

The first round of the presidential election was held on the 21st November and Jose Antonio Kast (leading the right-wing Christian Social Front alliance) led with 27.91% compared to Boric’s 25.82%. As no candidate secured a majority, a second round was held and Boric comfortably defeated Kast, with 55.87% of the vote to 44.13%. Gabriel Boric thus became the president-elect of Chile, the youngest president in Chile’s history at thirty-five years old.

As historic as this election has been for Chile, those of us in Britain and the rest of the world may well be wondering: why does Boric’s victory in the Chilean elections matter to the rest of us? After all, Chile has only the world’s forty-third largest economy and a population of nineteen million people.

We must not overlook Chile’s economic and geopolitical importance. Chile, like Britain, is far more influential than its size and population suggests.

However, we must not overlook Chile’s economic and geopolitical importance. Chile, like Britain, is far more influential than its size and population suggests. The country’s economy represents a critical node in the global economy, as Chile is the world’s largest producer of copper and the second largest producer of lithium, which is used to produce batteries and components crucial in most modern technology. Chile also has significant regional influence, as it is often held up by other South American politicians as a model for political and economic stability on the continent. Any instability in Chile bodes ill for other South American nation states, and could mean increasing attempts by South Americans to migrate to the USA. Britain should pay close attention to the Chilean election, as this is precisely the type of country that post-Brexit Britain must improve its trade and investment relationship with. Chile is a member of the OECD, has experience of signing Free Trade Agreements with economies such as the USA, is a large exporter of minerals and agricultural products, and is developing a leading financial services sector in South America. If ‘Global Britain’ can’t expand its commercial ties with a free-market economy such as Chile’s, then the slogan is as vacuous as its detractors suggest.

Thus, what exactly are the implications of Boric’s victory?

Gabriel Boric is likely to attempt to usher in a new era of social liberalism and economic reform that will either be socialist or reminiscent of European social democracy. He is a strong supporter of equal rights for the LGBTQ+ community and legal recognition of non-binary identities. He has promised tax rises on the wealthy and businesses equivalent, in terms of their projected revenue, to 5% of GDP. He is keen to abolish the private pension system and increase public spending. He is also eager to tackle climate change, promising to oppose the $2.5 billion copper, gold and iron Dominga mining project that was approved in August 2021. Yet on becoming president, he has promised to balance this expansive progressive agenda with ‘fiscal responsibility,’ suggesting that he has taken notice of the jittery financial markets, who are anxious about his economic radicalism.

Indeed, fiscal stability and economic growth may prove to be one of Boric’s more difficult goals. The day after Boric’s victory, the currency, the Chilean Peso and the stock market fell sharply. There will be great pressure on Boric from Chilean and international business interests to modify his economic and environmental agenda, especially his opposition to mining projects that in his words ‘destroy’ the environment. The cynic within me says that this policy leaves Boric with only enough wriggle room to support mining projects that minimise damage to the climate. It is difficult to imagine a Chilean president sticking to an environmentalist agenda and not approving any more mining projects when copper mining accounts for 20% of GDP and 60% of exports.

It is difficult to imagine a Chilean president sticking to an environmentalist agenda and not approving any more mining projects when copper mining accounts for 20% of GDP and 60% of exports.

Meanwhile, the greatest political obstacle to Boric’s reform agenda is Congress. There are twenty-one different parties in the Chamber of Deputies and many of the members are independent-minded. In the Senate, Boric’s Approve Dignity alliance only holds four out of the fifty seats. Much of Boric’s four-year term hinges on the cabinet he selects and his government’s ability to build a meaningful and cooperative dialogue with Congress. He will not get all of his promised agenda through, but if he can enact some significant reforms, such as reforming the pension system and reducing income inequality, then his term should be deemed a success.

On the other hand, if Boric fails to build a majority in Congress for at least some of his proposals, then the ultra-conservatism of Kast, or some other figure, may return to lead Chile. Given much of the Chilean right’s persistent refusal to condemn the Pinochet dictatorship, that may well herald a return to dark days for the country.