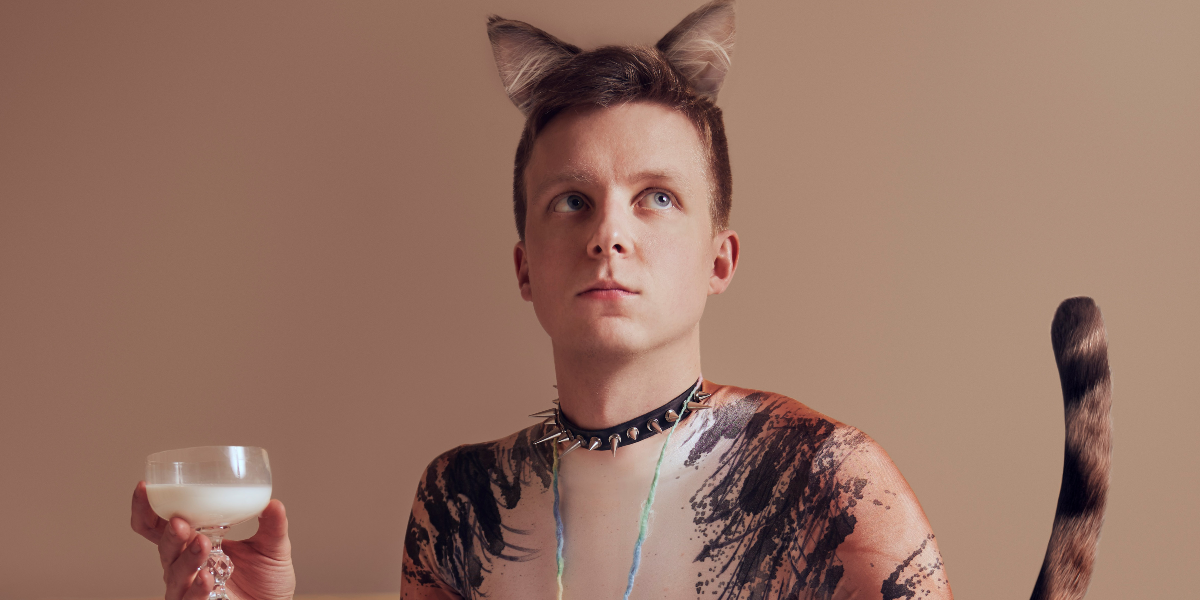 In Conversation with Linus Karp: How to live a Jellicle life

Image Description: an image of comedian Linus Karp, dressed up as a cat.

What were you doing in January 2020? You may have been reading, revising for those all important A-Levels or Prelims. You might have been out clubbing, feeling the pulse of a Plush or Fever through your corporeal form (and a similar pulse the morning after, hunched over a toilet). Whatever it was you were up to two years ago, comedian Linus Karp can match you for adventure, and more: he was watching the movie Cats for the third, maybe fourth, time in a month.

“It’s so weird and wonderful and fascinating and fantastic and awful at the same time. There’s really nothing like it”.

The critical nadir of Oscar-winning director Tom Hooper’s oeuvre, Cats first lit up social media in summer 2019, when a trailer dropped. Karp was one of the unconverted who had “never seen the stage musical”, but “saw everyone going crazy” on Twitter. From then on, it was a matter of time before he discovered the joy of the Jellicle cats: “I went along with my partner and his friends”, and lightning struck. “I couldn’t stop thinking about it, talking about it”, Karp told me. “I was transfixed, and went back to the cinema a few days later. Alone.” Was this to check he hadn’t gone insane after two hours of James Corden’s head on a CGI cat body? “Not quite,” he laughs, “’cause from then on I needed to know everything I could about Cats”. I can hear the smile over the phone. “You just can’t quite believe what’s happening in front of your eyes, can you? I mean they thought this was a good idea? An Oscar-winning director, and the end product was… this. Idris Elba looks completely naked!” Karp makes a fantastic point; Cats is such a truly bizarre feat of movie-making you can’t help but watch. “I’ve seen it so many times”, he chuckles. “It’s so weird and wonderful and fascinating and fantastic and awful at the same time. There’s really nothing like it”.

Linus Karp is here in Oxford to perform his new show, How to live a Jellicle life: life lessons from the 2019 hit movie musical ‘Cats’. Coming to the Old Fire Station this Friday 14th January, it’s the first show he’s written himself following a one-man performance in the similarly eclectic Awkward Conversations with Animals I’ve F*cked in 2019. I’m assured the fact that both bestiality and movie magic went down in the same year are completely (completely!) unrelated. Even during a short telephone conversation, the charismatic eccentricity of Linus Karp shines through. For his birthday he “threw a Jellicle ball” in honour of Cats – for my own I only forced my friends to watch the movie! Just like Judi Dench’s Old Deuteronomy, Karp watched as “people who wanted could perform whatever they liked, and I’d make the Jellicle choice”. I hear of how the ball featured “regular stand-up, a couple of poems” and “even a burlesque number… it was all very self-indulgent”. Though, disappointingly, Karp tells me he neglected to wear Judi Dench’s large fur coat. “It was only a black cat-suit. Not the same one I wear in the show though!”.

“Cats and How to live a Jellicle life seem to share that common joy: bringing audiences together in spite of their professed weirdness, or perhaps because of it.”

This glorious self-indulgence appears to be a running theme. I ask about Karp’s journey to putting on a comedy show like this. “I was quite pretentious as a teenager, I think! I wanted to be a serious actor” – don’t we all? “But I think that I started to realise that a lot of things I wanted to do ended up being comedy whether I wanted to or not”. How to live a Jellicle life appears borne from that desire to just be “full on, very silly”. But Karp is not just putting on a show about Cats to be self-indulgent, his inspirations are just as varied. On one hand he adores “a wonderful comic called Joseph Morpurgo. I haven’t seen someone master the medium as much as he has. He’s inspirational to watch as a result!”. On the other he glows as he recounts how he “saw a very silly clown show” with “the way they directed the audience”.  From his birthday Jellicle ball to this audience interaction, it is clear that what Karp loves is that sense that you’re all in it together, part of living that Jellicle life. “I wrote it in lockdown and missed the theatrical community, which I love. I wanted to create something where the audience got to experience something together, no matter how weird!”. Coming out of lockdown – which was “shit in every way” – what struck Karp was “how supportive the theatrical and comedy community were to each other” during the pandemic. Cats and How to live a Jellicle life seem to share that common joy: bringing audiences together in spite of their professed weirdness, or perhaps because of it.

Karp ends the interview with a classic three-word description of his show. “Queer. Silly. Stupid. Or Jellicle. I mean… obviously.” I count eight words there, but that’s the point. Conforming to convention wasn’t what made Cats fantastic, and it’s not what will make How to live a Jellicle life fun either. You can go see it at the Old Fire Station tomorrow, Friday 14th January. I’ll most certainly be there, and you too can make the right Jellicle choice and grab a ticket!