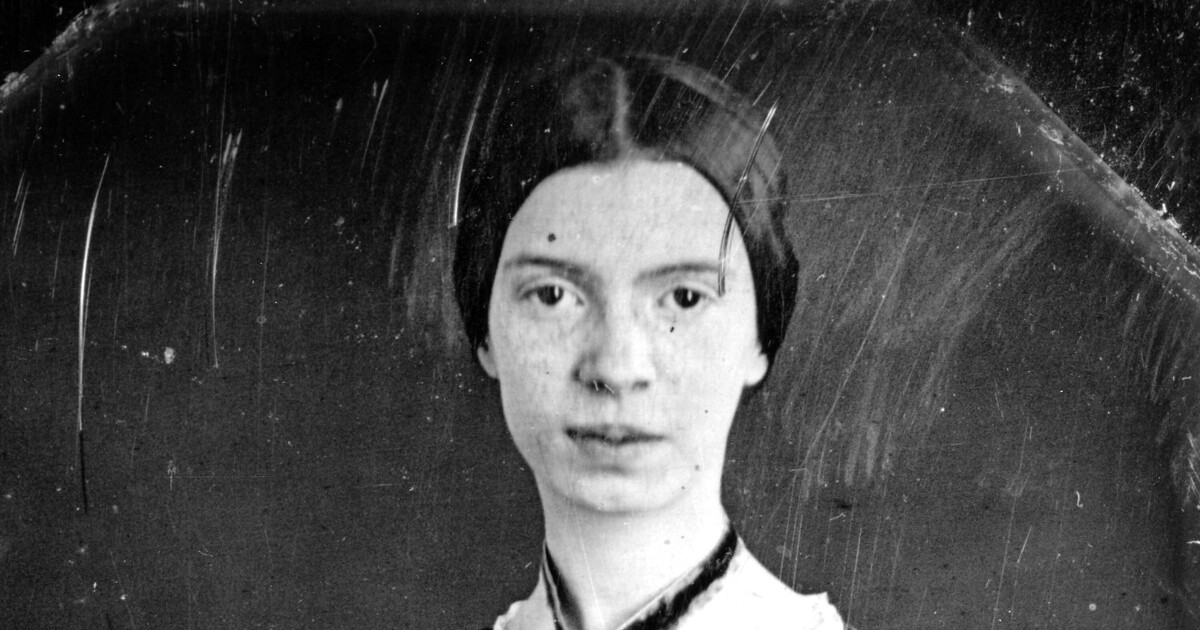 And they were… roommates?: The erasure of queer love

Image Description: Daguerrotype of Emily Dickinson. The poet’s relationship with Susan Gilbert and its romantic overtones have been the subject of erasure as a result of our heteronormative culture.


“And They Were… Roommates?” is an ancient meme – by internet standards at least – used to poke fun at academicians for their frequent “straightification” of historical couples that appear to be obviously queer.

A 2016 movie titled “A Quiet Passion,” is an example of the “straightification” of Emily Dickinson in contemporary media. The film failed to recognize Dickinson’s relationship with her sister-in-law, Susan Gilbert, for what it was, instead focusing on Dickinson’s wit and energetic meekness. Cynthia Nixon, the actor who played Dickinson in the film, even admitted to the poet’s “equal opportunity” sexuality not being present in the movie. Rather, it preferred to portray her as a vulnerable, lonely woman in pursuit of an unrequited romance.

This was an inaccurate depiction to say the least. Dickinson received an involved education thanks to the encouragement of her father, and she was filled with more spirit than her poems and your grade school textbooks may have suggested. In fact, she attended a school that was formerly an all-boys institution and took courses that rivaled that of boys her age. Thankfully, some later media came to ruffle this rigid image of Dickinson.

A later 2018  film, “Wild Nights with Emily,” based on Emily Dickinson’s affectionate relationship with Gilbert, is an example of how modern media is beginning to accept the likelihoods of these historical, queer relationships.

Of course, ”Wild Nights,” being a rom-com, takes quite a few liberties with the historicity of the relationship. However, the epistolary relationship between Dickinson and Gilbert illustrates an electric bond, defined by their mutual appreciation of each other’s intelligence and goodwill.

After marrying Dickinson’s brother William Austin Dickinson, Gilbert became her sister-in-law. Dickinson wrote more letters to her than any other person she was in correspondence with. Dickinson considered Gilbert her friend, her literary adviser, and her muse. So much so that Dickinson even compared her love for her “friend” to Dante’s love for Beatrice, the muse which inspired The Divine Comedy.

In short, Dickinson was explicit about her love and utmost admiration for Gilbert, so much so that Dickinson considered Gilbert’s writing advice like being a student of Shakespeare himself. In one letter from 1852, Dickinson writes:

“Susie…be my own again, and kiss me as you used to?…I hope for you so much, and feel so eager for you, feel that I cannot wait, feel that now I must have you – that the expectation once more to see your face again, makes me feel hot and feverish, and my heart beats so fast – I go to sleep at night, and the first thing I know, I am sitting there wide awake, and clasping my hands tightly, and thinking of next Saturday, and “never a bit” of you.”

The two young women lived close to one another; they were, in fact, next-door neighbours. Unfortunately, we will never know if Dickinson and Gilbert spent their nights with any spicy sexual escapades. That’s what the films are for!

But why has their relationship only recently come to light? One of the earliest texts which looks into Dickinson’s queerness is The Riddle of Emily Dickinson by Rebecca Patterson, originally published in 1951. This was a brave publication for the blacklisting era. Unfortunately, it did not receive much attention at the time of publication due to this culture. The author, in the preface, was forced to prove her straightness by mentioning she had a family and children, in order to avoid being criticized for advancing the “lesbian agenda.”

The earliest academic articles about Dickinson’s and Gilbert’s seemingly homoerotic relationship date from 1990. This is not an accidental year, as the early 1990s are often considered the beginning of third-wave feminism. This third wave soon coincided with queer feminism, especially after large feminist support of HIV/AIDS activism.

An additional reason is that Mabel Loomis Todd, Austin’s mistress, edited out much of Gilbert’s influence in the posthumous publications of Dickinson’s works. She also removed much of Dickinson’s lively nature, creating her into a gloomy figure she wasn’t.

Using modern infra-red technology, scholars were finally able to show what exactly Mabel edited out. They found that Mabel would either blot out words with ink or scratch them out with the end of a sharp blade. So, in this case, the queer erasure of Dickinson occurred in her time rather than from scholars of our own.

In “Wild Nights,” Loomis Todd’s editing criticism is played over Dickinson and Gilbert’s more “romantic” scenes. It is, at once, a running comical contrast between popular narrative and reality and a reminder of the queer erasure Mabel—and many others—committed. The scene and this erasure  begs the question: Why is it more palatable for Dickinson to be received as a melancholic spinster rather than a passionate, queer woman?

Martha Nell Smith, professor of English, and founding director of the Maryland Institute for Technology in the Humanities wrote that when she began reading the correspondence between Dickinson and Gilbert, she felt it was pretty obviously sexual. She questioned the long-time erasure of the poet and later published her findings in her 1992 book Rowing in Eden: Rereading Emily Dickinson.

Dickinson and Gilbert’s relationship lasted until Dickinson’s death. Gilbert wrote Dickinson’s obituary, which ended with this excerpt from Dickinson’s poetry:

“How better to note the flight of this ‘soul of fire in a shell of pearl’ than by her own words?

To her fair repose.”

They remained in love, even after death. Next time you read Emily Dickinson’s poetry, read in-between the lines to see beyond historical erasure. As Smith recalled, “I found myself thinking: If all of this was sent to any man in Dickinson’s life, there wouldn’t be any kind of argument about who was the love of her life.”